Presidential candidate Elizabeth Warren and her skin have been featured in thousands of up-close and personal selfies on the campaign trail. Glowing selfies have become a signature trait, alongside her robust energy and “can-do” attitude. But according to a new interview with Cosmo, the Democratic senator from Massachusetts apparently “never” washes her face.

Warren revealed her most controversial policy yet during Cosmo’s “Meet the Candidates” video series, in which Editor-in-Chief Jessica Pels grills presidential hopefuls on policy, pop culture, and the most burning topic of all, their skin care routines.

As Warren tells it, she uses Pond’s moisturizer “every morning, every night.” But “never” washes her face.

“So I have ― had, she’s passed now ― but a much older cousin named Tootsie,” she told the mag. “Years ago, I was, I guess probably somewhere in my 20s, and we’re at a big family reunion. And Tootsie was beautiful. I looked over at her, and I said, ‘Toots, how do you have such gorgeous skin?’ She said, ‘Pond’s Moisturizer every morning, every night, and never wash your face.’ So from Tootsie to me to you.”

Never? NEVER? It seems unbelievable. And here’s where it gets a little murky. Pond’s makes a cold cream cleanser that has been a tried and true skin care staple for decades ― the brand itself launched in 1846. A jar of the cold cream, which both removes makeup and moisturizes the skin, is likely sitting in your grandmother’s vanity right now.

So it would track that Warren’s “much older cousin” would have used this cold cream, with the same texture as a moisturizer, thus inspiring Warren to follow suit. But Pond’s also sells plain moisturizer, and as confirmed to HuffPost by a spokesperson from the Warren campaign, the moisturizer is what she uses.

Either way, the comment sparked a debate you won’t find on PBS: Are people really not washing their faces? And is that ― gulp ― OK?

In short, not really.

“It is one of my pet peeves, my patients know me well on this,” Rosemarie Ingleton, a New York City-based board certified dermatologist, told HuffPost. “It is pretty important to wash your face. Throughout the day the skin accumulates dirt from the environment, oils your skin produces, sweat your skin produces, makeup if you have it on, unwanted debris in the environment ends up on your face throughout the day. Pollutants, bacteria, viruses, all of that. And then you have dead cells. If you don’t cleanse, you don’t remove that, the layer just remains.”

Like us, Ingleton had doubts over whether Warren really does nothing at all. “She probably at least lets the water run over her face in the shower,” she said. But she maintained that’s just not enough.

“What you might get off with just water is just some of the surface oils and loose dirt particles, but water by itself won’t do a thorough enough job of getting rid of all the things that are sitting there throughout the day,” she said. 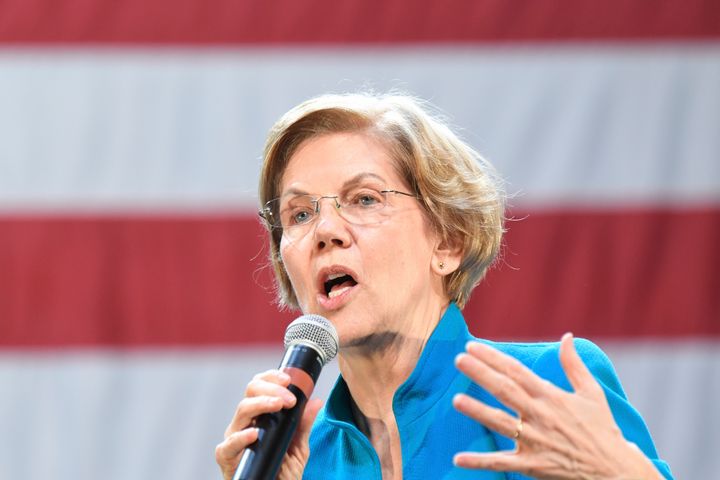 Ingleton said not washing your face will make the skin look dull, clog pores and increase potential for breakouts. But even if you don’t break out, you’ll still face some consequences. “You may look fine, but if you really look up close your skin doesn’t really have the luminosity.”

Craig Kraffert, a board-certified dermatologist and president of Amarte Skin Care, echoed Ingleton’s sentiments when asked if washing was, in fact, really necessary. “Only death and taxes are necessary,” he told HuffPost in an email. “Facial cleansing is very important, however.”

But Warren practically glows! Sandra Lee, aka Dr. Pimple Popper, might have some answers on this debate, too. She told HuffPost in March 2019 that much of good skin “has to do with genes” and “the type of skin you’re born with.”

Still, Ingleton recommends at least some type of cleansing. She typically suggests cleansing wipes to patients who don’t want to spend time washing, but always prefers they do it the old-fashioned lather, rinse, repeat when necessary way.

Both Ingleton and Lee agree that a good face wash does not need to set you back a ton of money, but Kraffert has some specific guidelines for picking one.

“At a most basic level, the key is to choose a cleanser that is gentle, pH balanced and free of harsh ingredients like alcohol or rough exfoliants,” he said. “Beyond that is to consider the experience of the skin care ritual. Many people enjoy their morning and evening cleansing routine as it creates an energizing feeling to start the day, and removes grime and pollutants in the evening.”

The internet hasn’t been this up in arms over skin care since *checks notes* Pete Buttigieg revealed, in his interview with Cosmo, that he doesn’t use moisturizer. (For what it’s worth, his husband, Chasten, was quick to correct him ― no word yet from Warren’s husband, Bruce, on the matter.)

So ― Buttigieg only uses soap. Warren only uses moisturizer. We never thought we’d say this, but together they’d make one hell of a team. At least when it comes to matters of the skin.

And if nothing else, at least we know, uh, someone finally got answers.

Head to Cosmo to see the entire interview.

CORRECTION: A previous version of this article misstated the name of Warren’s husband.

END_OF_DOCUMENT_TOKEN_TO_BE_REPLACED

END_OF_DOCUMENT_TOKEN_TO_BE_REPLACED
Recent Posts
We and our partners use cookies on this site to improve our service, perform analytics, personalize advertising, measure advertising performance, and remember website preferences.Ok