Adele is staying dedicated to working on her fitness.

The “Someone like You” singer, spotted in Los Angeles rocking a sleek, all-black workout ensemble, stepped out in athletic leggings, an Adidas half-zip pullover, a sporty Nike bucket hat, and matching lace-up training sneakers. Adele’s blonde hair peeked out from under her low-brimmed topper, while she accessorized with multiple gold chain-link bracelets and dark-hued nail polish. 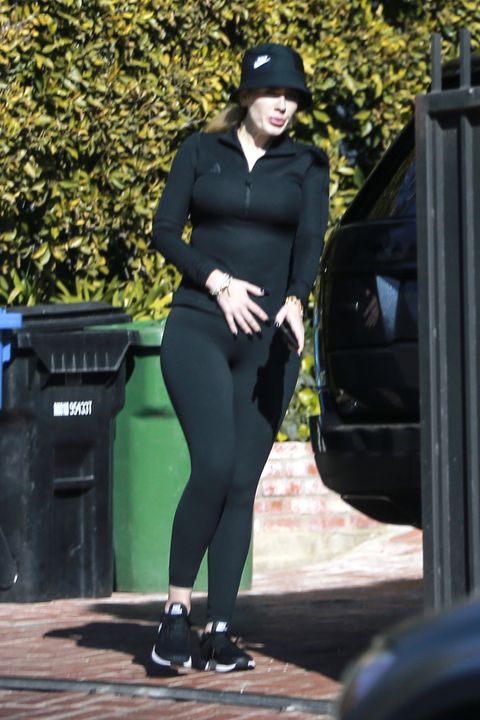 The British pop singer has been seen making rare public appearances in recent weeks—first in an Instagram from her Christmas party over the holidays, and most recently at Beyoncé and Jay-Z’s Oscars after-party last week. According to People, the singer is focused on retaining a healthy lifestyle so she can be the best mother to her young son, Angelo Adkins.

“It’s easy to just focus on her physical transformation, but this is really about something bigger,” a source told People. “She got to the point where she didn’t feel great. She knew she had to change something, because she wants to be the healthiest mom possible.”

In the midst of the singer’s appearances at high profile celebrity events, Adele’s most dedicated fans stay ready for the star’s upcoming music, rumored to be released later this year.

“She talks about last year as a very difficult year, and she’s said in the past that creating new music is almost like therapy,” said a People source. “You can tell that she is ready to share with her fans.”

END_OF_DOCUMENT_TOKEN_TO_BE_REPLACED

END_OF_DOCUMENT_TOKEN_TO_BE_REPLACED
Recent Posts
We and our partners use cookies on this site to improve our service, perform analytics, personalize advertising, measure advertising performance, and remember website preferences.Ok