Are Dean Unglert & Caelynn Miller-Keyes Engaged? This Update Is Confusing

Every once in awhile, Bachelor Nation throws you a curveball. I didn’t think that Dean Unglert and Caelynn Miller-Keyes would get engaged any time soon, based on interviews they’ve given in the past, but her Instagram comment has me second-guessing everything. On Feb. 12, Miller-Keyes took to Instagram to post a carousel of two pictures of herself and Unglert atop a rock in Yosemite. "Not even a broken femur can stop this guy from exploring," she captioned the post. (ICYMI: Unglert broke his femur during a December ski accident.)

But the real exciting part of Miller-Keyes’ post takes place in the comments section. Much to the delight of all of the many fans of the couple, The Betchelor (also known as The Betches’ Bachelor-themed podcast) managed to capture a particularly juicy exchange between Miller-Keyes and an Instagram user who goes by @heather_xo88. The fan commented, "he needs to propose." And here’s where things get super interesting. Miller-Keyes responded to Heather’s comment saying, "he already did." (Elite Daily reached out to reps for both Miller-Keyes and Unglert for comment on the claim that they are engaged, but did not hear back in time for publication.)

Check the entire exchange out for yourself here: 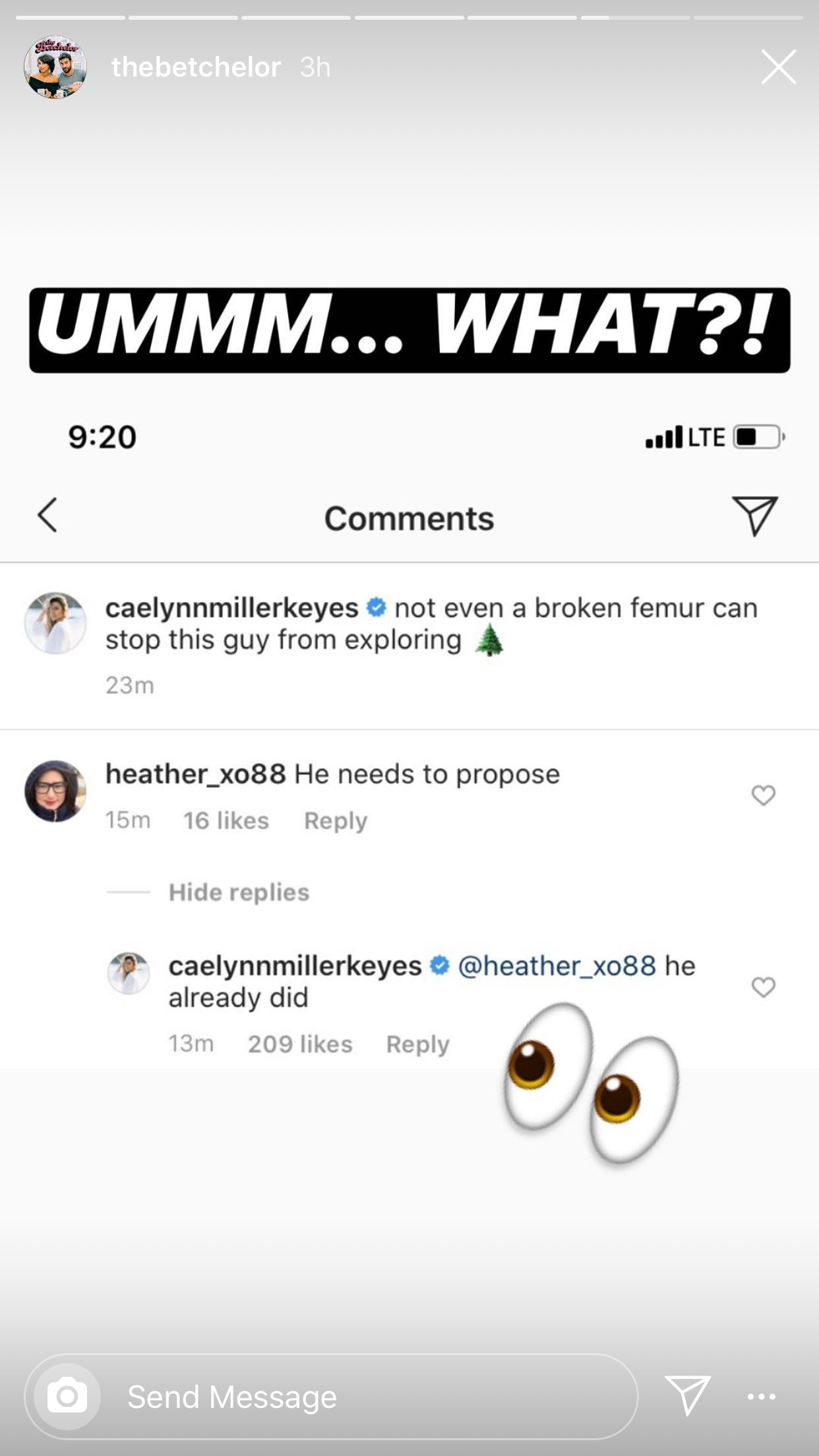 Um, I’m sorry but WHAT? He already did? When?! Am I being punked? Where’s Ashton Kutcher?

To be clear, I did some research on this Heather person and it doesn’t seem as though she has any tie to the Bachelor Nation world. (Her account is also private.) Miller-Keyes does not follow the account and neither does Unglert. So, it’s not like it was a friend of theirs checking in to see what’s going on with them and Miller-Keyes felt like she had to respond to be polite. There was no real need for Miller-Keyes, who gets thousands of comments from strangers on all of her pictures, to respond to this one comment and yet she did. I truly have no idea what to make of this information.

not even a broken femur can stop this guy from exploring 🌲

Under any other circumstance I would just assume that the couple really is engaged and that this just so happened to be the most chill announcement of all time, but in this case I’m left a little skeptical because of the openly harsh comments Unglert has made about "never" marrying Miller-Keyes in the past.

Allow me to point you toward a truly painful interview Unglert did with Us Weekly on Dec. 6. “That’s never going to happen,” he blatantly said of the possibility of getting married to girlfriend Miller-Keyes. “She does joke around about us getting married all the time, and I always say, ‘Sorry, it’s not going to happen.’"

So, um, maybe he changed his mind… ? Or maybe this was another one of Miller-Keyes’ "jokes" about them getting engaged? Either way, I feel awkward.

END_OF_DOCUMENT_TOKEN_TO_BE_REPLACED

What has Prince Andrew got planned for his 60th birthday?

Prince Andrew’s birthday usually a huge occasion for a member of the Royal Family, but celebrations are expected to be muted as the duke turns 60 today. The Duke of York is still suffering from the public uproar after his infamous interview with the BBC’s Emily Maitlis. His interview with

END_OF_DOCUMENT_TOKEN_TO_BE_REPLACED

A group of fisherman found themselves being circled by a monster great white shark, in terrifying footage going viral online. One clip – taken off the coast of Santa Barbara in California, US – shows the anglers coming across the ominous black figure. “Holy s***, is that a great white?”

END_OF_DOCUMENT_TOKEN_TO_BE_REPLACED

Somali militants kill 12 soldiers in attack on base, say officials

MOGADISHU (Reuters) – Islamist al Shabaab militants killed at least 12 Somali soldiers and briefly captured a military base southwest of the capital on Wednesday, officials said, underscoring the insurgents’ ability to launch attacks despite a government offensive. A suicide bomber detonated at the El Salini base before gunmen stormed

END_OF_DOCUMENT_TOKEN_TO_BE_REPLACED
Recent Posts
We and our partners use cookies on this site to improve our service, perform analytics, personalize advertising, measure advertising performance, and remember website preferences.Ok