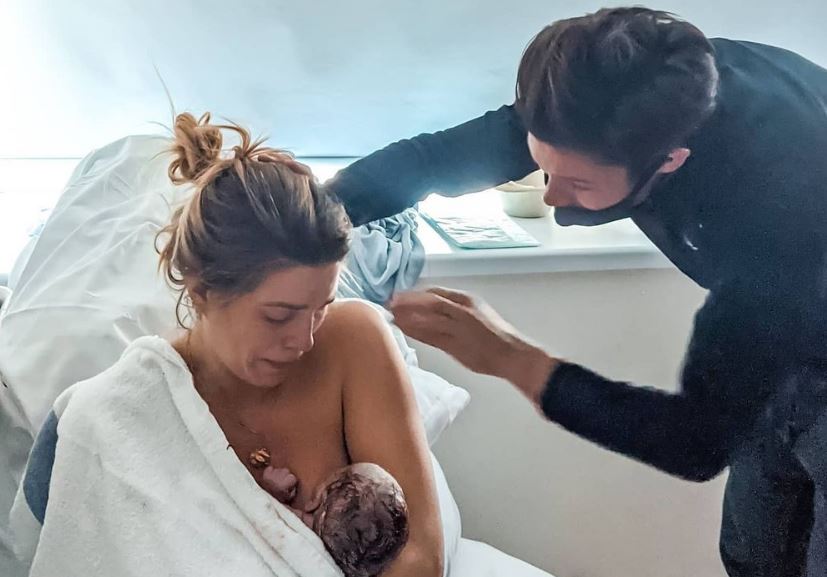 Ashley James has opened up about the challenges she faced bringing Alfie into the world as his ‘heart rate dropped’ during birth.

The former Made In Chelsea star shared with followers on Instagram that Alfie had been ‘crying more than usual’.

She thanked fans for their advice, adding that she used a baby massage video to help settle him.

The TV star later shared that she could understand Alfie, who was born in January, having a few ‘niggles’ after his ordeal during birth which left his face ‘swollen and bruised’.

The new mum described her son’s birth as ‘traumatic’ as he had to be delivered quickly.

Posting an intimate picture of Alfie lying on her bare chest in hospital, Ashley said: ‘Alf had quite a traumatic entry into the world with his shoulders needing to twist and being such a big baby.

‘His heart rate dropped and I had to push him out very quickly.’

She continued: ‘You can see how swollen and bruised his little face was. So it would make sense if he’s got a few niggles from his birth.’

Alfie is the first child for Ashley and her boyfriend Tom Andrews.

Announcing his name in Hello! magazine, the DJ compared her 18-hour labour to running a marathon.

‘I love being a mum. Every day I love him more. Before he came along, I suffered from anxiety, but now I feel calm and content, as if I was made to be a mum,’ she shared.

‘I’ve run two marathons, but giving birth is harder. I was in labour for 18 hours, but Tommy was with me all the way, holding my hand. And when Alfie finally emerged, it was amazing.’