Great British Bake Off presenter Matt Lucas has declared he is now a German citizen and has secured dual nationality after he controversially branded Brexit ‘pointless and masochistic’.

The 47-year-old comic, who rose to fame starring alongside David Walliams in Little Britain, took to social media on Tuesday to reveal his dual nationality and show off a pin badge of the two national flags given to him by the German Embassy in London to collect his paperwork.

In a post, the Remainer explained that his grandmother escaped Berlin in 1938. He previously told how members of his maternal side fled Nazi persecution over their Jewish heritage prior to World War Two. Lucas was then born in London in 1974 to parents Diana and John.

He said the naturalisation process had taken about six months, before amusingly quipping that he had been given a pin badge featuring both the British and German flags and gummy bears, or ‘Gummibärchen’.

‘Now to choose a German football team,’ he told his social media followers. Later, Lucas revealed that he had been ‘claimed’ by football team Union Berlin, who praised his move on Twitter.

Lucas previously caused a stir when he shared an anti-Brexit article by The Guardian newspaper and branded London’s deal with the EU ‘pointless and masochistic’. He did not comment on whether his decision to change his nationality was based on the referendum outcome.

Previously, the Bake Off star said: ‘I’m a Remainer and I’m proud of the fact that Britain has a rich and varied racial and cultural mix.’ 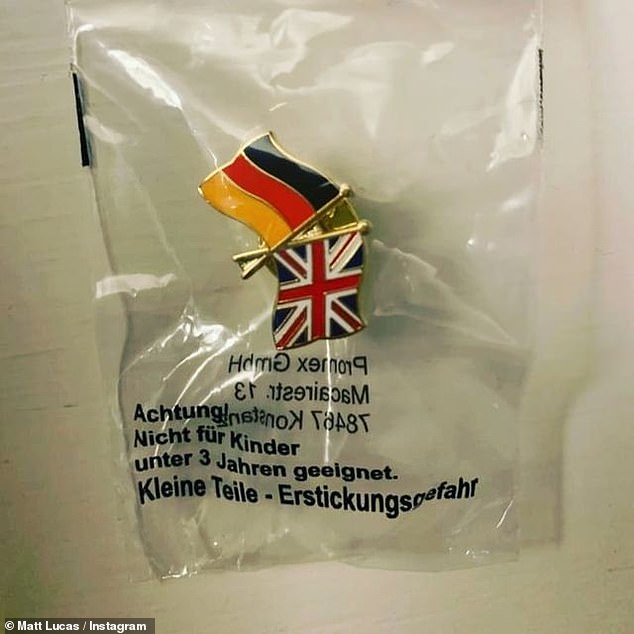 Anglo-German! Matt Lucas has announced he is now a German citizen after securing dual nationality following his scathing comments about Brexit 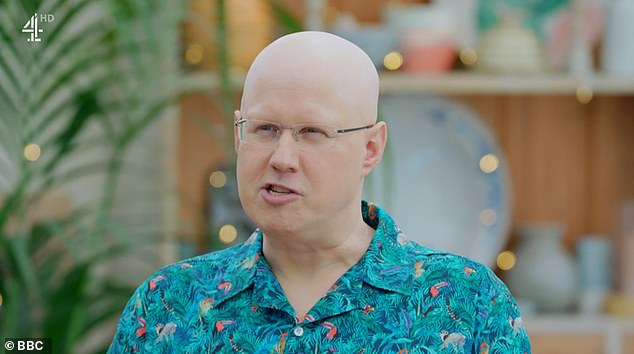 News: The Great British Bake Off presenter, 47, took to Instagram on Tuesday evening to reveal his new Anglo-German status and show off his gift from the embassy

Opinion: The comedian previously caused a stir when he shared an anti-Brexit article published by The Guardian, branding the deal ‘pointless and masochistic’

Earlier this year, the German Parliament voted to lift restrictions that prevented some descendants of German Jews from claiming citizenship.

Those whose ancestors were persecuted by the Nazis, including Roma and Jews, now have an easier path to becoming German, The Jewish Chronicle reported.

Lawyer Felix Couchman, who lobbied for the change, told Deutsche Welle at the time that the new law was ‘a milestone’ and said receiving citizenship was significant as it symbolised ‘a recognition that a wrong was done to them and their family members and forebears and that is now finally being acknowledged and being corrected.’

Lucas also responded to a fan who asked if he was now entitled to a German passport, to which he replied saying: ‘yes’.

During a recent episode of Bake Off, Lucas and his co-star Noel Fielding dressed up as German band Kraftwerk for the introduction to a German-themed week on the show.

He also sang The Flintstones theme entirely in German for Bake Off frontrunner Jürgen Krauss, who hails from the Black Forest.

At the time, Lucas defended his accent on the episode to critics who called their ‘fake’ German accents ‘rude’ and ‘offensive’.

Today, Lucas also responded to a fan who asked if he was now entitled to a German passport, to which he replied saying: ‘yes’ 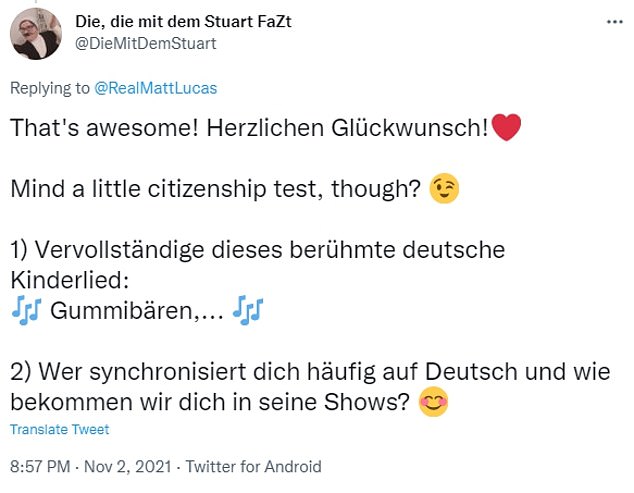 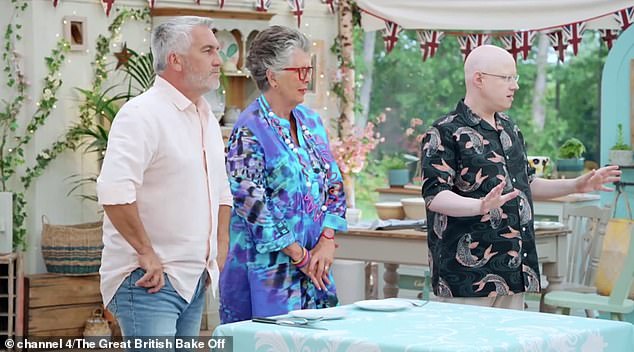 No comment: The comedian did not comment on whether his decision to change his nationality was based on the Brexit vote

‘I am Anglo-German. I am a citizen of both countries, with passports for each, so I’ll do a ropey German accent any time I like,’ he tweeted. ‘Mind you, I’ll probably also do a French accent and an Italian one, if I fancy. Cause, acting, innit.’

Lucas quipped that he also sang the song – known as Feuersteins – at the German Embassy in London.

Social media was ablaze over Lucas’s announcement, with scores of fans praising his decision to get dual nationality.

Another said: ‘I knew there was a deeper bond between you & Jurgen from #GBBO. Herzlichen Gluckwunsch!’

But a third chimed in: ‘Congratulations. You now have the German responsibility to complain about absolutely everything and to share your opinion even if you don’t know the topic and no one asked for it.’

Lucas caused a stir in February last year when he shared an anti-Brexit article published by The Guardian.

Resharing the news outlets headline, he posted: ‘Brexit, the most pointless, masochistic ambition in our country’s history, is done.’ 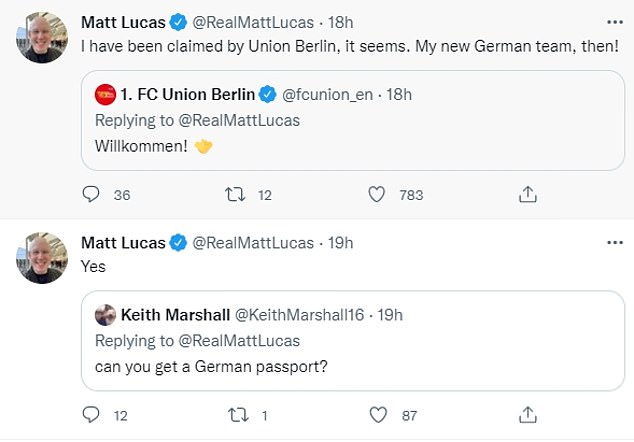 Response: Matt also responded to a fan who asked if he was now entitled to a German passport, to which he replied saying: ‘yes’ 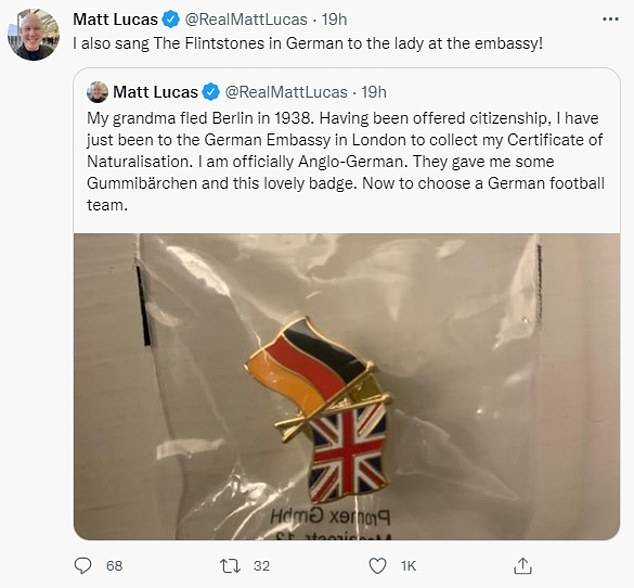 Lighthearted: Matt quipped that he also sang the song – known as Feuersteins – at the German embassy

‘I’m a remainer!’ The funnyman – who is best-known for the sketch shows he created with Britain’s Got Talent judge David Walliams – appeared happy to reveal his stance on Brexit

Responding to his outburst, one Twitter user said: ‘We had a ‘rich and varied culture mix’ long before we entered the EU. Once we’re out, we can continue to mix with the whole world and not just with the EU countries alone!’

Another said: ‘He can’t, he’s in a luvvy bubble. No idea about the real world. Just happy virtue signalling.’

And one explained that Brexiteers ‘voted for change’ and ‘not to maintain the establishment and status quo’.

They added: ‘We’re sick and tired of wealthy sanctimonious celebrities in their London media bubble telling us how to vote and what to think.’