Billy Porter has been living with HIV for 14 years.

For the first time since his diagnosis in 2007, the Pose star spoke publicly about his experience with the illness, and what it means for him to play an HIV-positive character on mainstream television. While speaking to The Hollywood Reporter, he said, “Well, I’m living so that I can tell the story. There’s a whole generation that was here, and I stand on their shoulders.”

When Porter, 51, found out he had HIV, it was long before his Tony-winning stint on Broadway’s Kinky Boots. In fact, it was during a particularly difficult time in his life, shortly after finding out he had type 2 diabetes and signing bankruptcy papers. “The shame of that time compounded with the shame that had already [accumulated] in my life silenced me, and I have lived with that shame in silence for 14 years,” he said. “HIV-positive, where I come from, growing up in the Pentecostal church with a very religious family, is God’s punishment.”

For a long time, Porter kept his diagnosis a secret from many people, including his mother. “I was trying to have a life and a career, and I wasn’t certain I could if the wrong people knew,” he explained. “It would just be another way for people to discriminate against me in an already discriminatory profession.”

With Pose, the actor found a unique opportunity in portraying Pray Tell, a character struggling with his own HIV-positive diagnosis. He described the role as “an opportunity to work through the shame [of HIV] and where I have gotten to in this moment. And the brilliance of Pray Tell and this opportunity was that I was able to say everything that I wanted to say through a surrogate.” Porter earned an Emmy for this performance in 2019.

After deep self-reflection over the past year in quarantine, Porter decided it was finally time to tell his mom. He and his sister had planned to get vaccinated, pay her a visit, and tell her during the trip. But instead, on the last day of filming Pose, Porter chose to call his mom and tell her over the phone. He recalls her telling him, “You’ve been carrying this around for 14 years? Don’t ever do this again. I’m your mother, I love you no matter what. And I know I didn’t understand how to do that early on, but it’s been decades now.”

Porter realized that part of why he kept his diagnosis to himself was his own embarrassment. “It wasn’t a fear that [my status] was going to come out or that somebody was going to expose me; it was just the shame that it had happened in the first place. And as a Black person, particularly a Black man on this planet, you have to be perfect or you will get killed. But look at me. Yes, I am the statistic, but I’ve transcended it. This is what HIV-positive looks like now.” 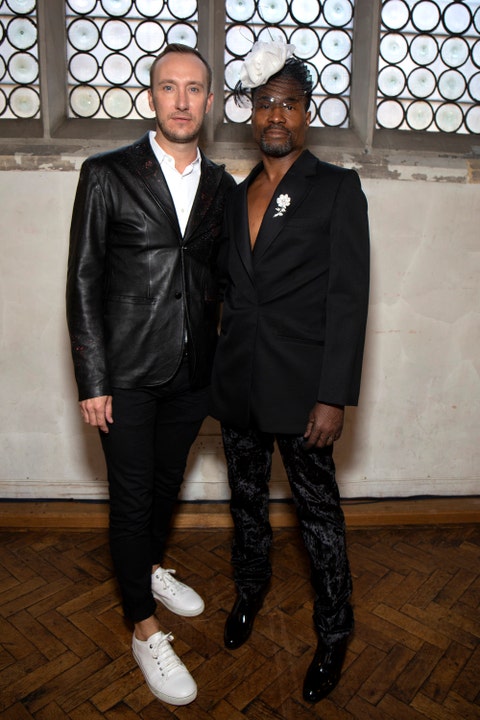 Porter has been happily married to husband Adam Smith for three years. They’re even trying to start a family, the star revealed. At this point in his life, on his journey of healing, he felt it was the right time to share his story with the world, on his own terms.

“I’m the healthiest I’ve been in my entire life,” Porter said. “So it’s time to let all that go and tell a different story. There’s no more stigma—let’s be done with that.”