It’s the goggledogs! Did debut of TV station for mutts have CHRISTOPHER STEVENS’ pet pooch reaching for the paws button?

Tonight on the Great British Bark Off, six talented pets will compete to impress judges Prue Leash and Paul Hollywoof, demonstrating their obedience and showcasing their stick-fetching skills. But which dog will be told to Get Down! – and which will be voted Man’s Best Friend?

I jest, of course. That won’t really be happening. Dogs long ago lost their prized place as our favourite TV friends.

Viewers of a certain age may remember Lassie or have grown up with Blue Peter’s Shep and Petra, but now you’re unlikely to see a mutt on screen unless it’s a casualty in some edgy drama.

Bobby the collie, for instance, was already dead and buried in the back garden at the start of the psychological thriller Close To Me on Channel 4 at the weekend. We only saw the poor creature in flashbacks.

But that may be about to change with the launch of a new channel in the UK yesterday that is dedicated to dogs.

With round-the-clock footage of pooches playing, eating, chasing and getting their ears tickled, it’s a dog-lover’s dream. Except it isn’t aimed at owners. 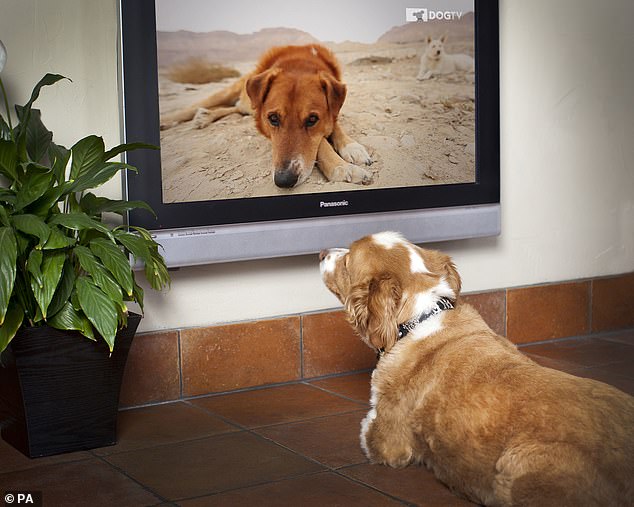 The notion behind DogTV, a new subscription TV service launching in the UK, is that this is canine entertainment, with colours, sounds and subjects specially chosen to appeal to dogs

The slightly crackers notion behind DogTV is that this is canine entertainment, with colours, sounds and subjects specially chosen to appeal to dogs.

Being deficient to the sum of two legs and a tail, I am not best placed to gauge how successfully this American broadcaster is meeting its brief.

I do have a dog, though – a ‘cavoodle’ (or ‘cavapoo’ or ‘poovalier’) called Fizzy. She’s bright and inquisitive, and when wildlife programmes are on TV she pays attention to the animal cries and birdsong.

So Fizzy and I reviewed the launch of DogTV together. At first, she seemed intrigued; four terriers were chasing a ball, with plenty of yapping and squeaking.

She was less entranced by a clip of a child showing her Barbie dolls to a Scottie dog. It went on for ever and the mutt, unsurprisingly, looked half-comatose with boredom.

When I tried replaying some clips, Fizzy lost interest completely. It seems dogs get fed up with repeats just as quickly as humans.

DogTV claims to be based on hard science. The colours are calibrated for them. Dogs have dichromatic sight, meaning most of what they see is black and white.

But they do have two varieties of colour-sensitive cells, called cones, at the back of their eyes: yellowy-green, and blueish-violet. They cannot distinguish red from orange or yellow and they see turquoise as grey. 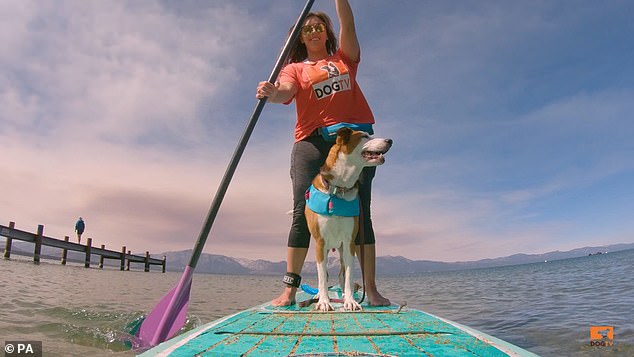 DogTV (pictured) claims to be based on hard science. The colours are calibrated for canines because dogs have dichromatic sight, meaning most of what they see is black and white

Danger signals – bright scarlet berries, for example – from some poisonous plants were not important to dogs. Dogs are also bad at seeing anything at close range.

All their perception within 20 inches or so is based on scent. That means when you cuddle your dog, all he or she can see of your face is a blur… but your comforting smell is what they really love.

It also means that if you want to watch TV with your pet, make sure the screen is several feet away.

DogTV has been popular in the States for years and some owners apparently leave their pets alone with the TV on, with these programmes providing the only company for hours at a time.

To me that sounds alarming but the channel’s founder, Ron Levi, claims studies show his programmes can help to reduce an animal’s stress levels. ‘Dogs are proven to like to see other dogs on screen,’ he insists.

In one four-hour segment there are jaunty woodland walks, games with balls and frisbees and all the excitement of the great outdoors from farmyards to the African savannah.

For dogs (and their owners) who want to chill, there is dreamy electronic music drifting over dogs curled up in baskets or snoozing on sofas.

There are also short films of postmen ringing doorbells, plus thunderstorms and vacuum cleaners with the sound muffled, which are supposed to help pets learn to cope with stress.

And there are scores of instructional videos on subjects from ‘travelling with your dog’ to ‘therapy dogs’ and ‘music for your dog’.

The lengthy ‘good night’ films are somewhat bizarre, with distorted and dreamlike colours. One features endless images of human families that are slowly erased until the screen goes black. If I were a highly strung hound, that’s how my nightmares would look.

To subscribe (at £6.99 a month) you’ll need a smart television hooked up to a service such as AppleTV or Roku.

Whether it’s worth buying depends on your dog’s personality. My Fizzy wasn’t interested for long, but she’s bred to be a companion: she needs to be with humans day and night.

Many people acquired poodle-crosses like her in lockdown. Dogs such as these are prone to anxiety at being left alone, and television is no substitute for company, any more than it is for a child.

But if you love gentle videos of dogs, endlessly loving and loyal, DogTV has more than you can shake a stick at. Or a bone.