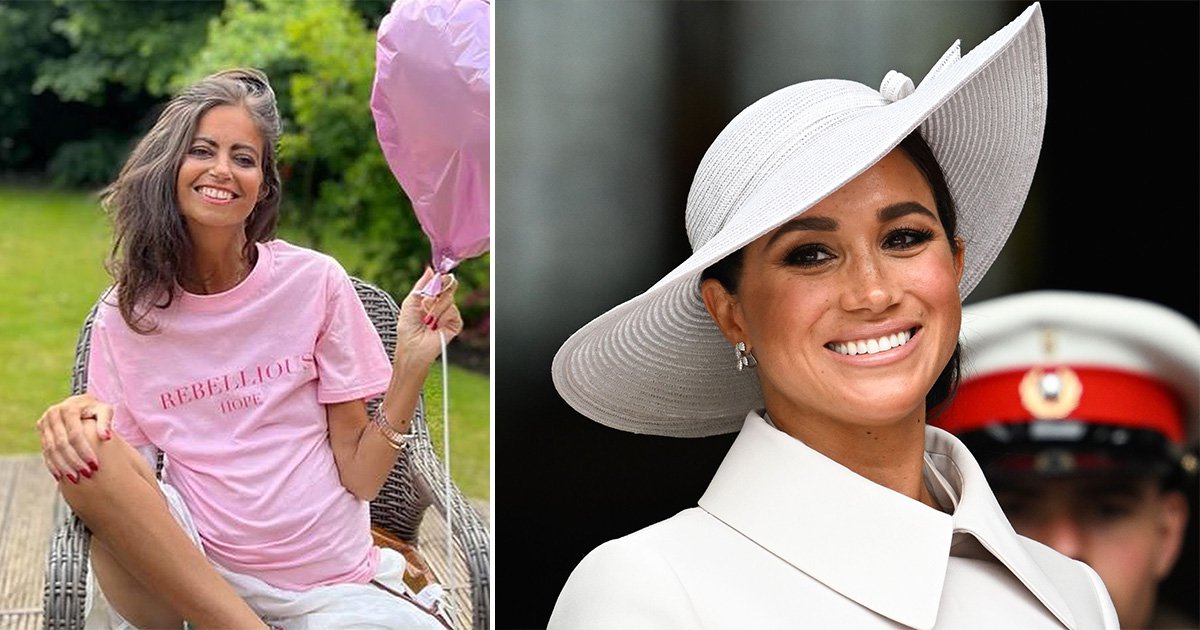 Dame Deborah James has clarified that the comment she made about not dying over the Jubilee weekend as her thunder would be stolen by Meghan Markle and Prince Harry was ‘a joke’.

The You Me And The Big C podcast host and campaigner revealed last month that she is receiving end-of-life care at her family home in Surrey.

She was diagnosed with terminal bowel cancer in 2016 and began documenting her journey with treatments on social media, which led to a huge following.

The 40-year-old, who was honoured with her damehood at home, personally, from Prince William last month, had previously quipped that she was ‘determined not to die’ over the Bank Holiday weekend as she didn’t ‘want Meghan stealing my thunder’.

She added to The Sun: ‘I haven’t worked so hard to raise cancer awareness and money to help find a cure, only to miss out on another Sun front page when I go.’

Now Dame Deborah has taken to Twitter to make things crystal clear, posting on Sunday: ‘Megan comment is a joke, apparently you can still find a send off [sic] fun in your day! The rest is not.’

‘Is dying the last taboo of them all?’ she asked, before continuing: ‘I thought poo talk was hard, but navigating end of life care makes checking your poo easy by comparison of DNR [do-not-resuscitate order] chat and respect documents!’

The Duke and Duchess of Sussex jetted over from the US to join the Royal Family for the Queen’s Platinum Jubilee, appearing at Friday’s special service of thanksgiving at St Paul’s.

Other than that they kept a low profile, although they are believed to have also thrown a ‘relaxed’ first birthday party for daughter Lilibet, following on from her first meeting with the Queen.

Dame Deborah revealed that she has thrown her ‘last impromptu party’ as she celebrated her brother’s engagement news with her loved ones.

She also shared an honest update on the emotional struggle she’s faced during her cancer battle, admitting she’d been ‘consumed by anger’ as she faced up to her future and said that she ‘didn’t want to die’.

During recent weeks, the campaigner has raised over £6.6million for her Bowelbabe Fund for Cancer Research UK, and had a rose named after her which was displayed at the Chelsea Flower Show.

You, Me & The Big C podcast host Dame Deborah James has admirably raised money towards cancer charities after announcing that her own bowel cancer was now terminal.

She is now receiving end-of-life hospice care at home due to her cancer treatment being stopped last month.

With the support of Cancer Research UK (CRUK), Dame Deborah and her family established the Bowelbabe Fund, with all money raised to be allocated to funding clinical trials and research into personalised medicine that could result in new treatments for cancer patients, including projects in collaboration with partners such as The Institute of Cancer Research (ICR) and The Royal Marsden. Donations will also go towards continued support to raise awareness of cancer, such as Bowel Cancer UK’s Never Too Young campaign.

At the start of June, the fund had so far raised £6.6million to go towards clinical trials and research into personalised medicine for cancer patients and supporting campaigns to raise awareness of bowel cancer.

You can donate via the Just Giving link here.

Dust off your Union Jack bunting, Queen Elizabeth II’s Platinum Jubilee is well and truly upon us.

Taking place from Thursday, June 2, to Sunday, June 5, the celebrations mark Her Majesty’s record-breaking 70th year on the throne.

Across the UK, there will be street parties, concerts, and other special events attended by the Queen and senior members of the Royal Family.

Visit Metro.co.uk’s Platinum Jubilee page for all the latest updates.