Dave Chappelle’s alma mater to name theater after star despite 'Closer' backlash: 'Stand behind our decision'

Dave Chappelle’s former high school will move ahead with honoring the comedian. The decision comes after students jeered and heckled him during a recent Q&A.

They reportedly expected him to apologize following the backlash Chappelle received for jokes he made about the transgender community in his “Closer” special.

The Duke Ellington School of the Arts in Washington, D.C., had made plans to call off the theater-naming ceremony for the performer due to the special’s criticism but now says it will “stand behind” its alumnus, after all – even after Chappelle had joked that the school was “canceling stuff I didn’t even want to do.”

“Recently, Dave Chappelle, via his Instagram page, challenged those who both support and oppose the decision to name the theatre at Duke Ellington School of the Arts after him through a fundraising contest,” the institution said in a statement on Sunday.

“While we appreciate Dave’s impromptu and spirited fundraising initiative, we stand behind our decision to honor the wishes of our co-founder, the late Peggy Cooper Cafritz, to name the theatre after Chappelle,” it adds in part. 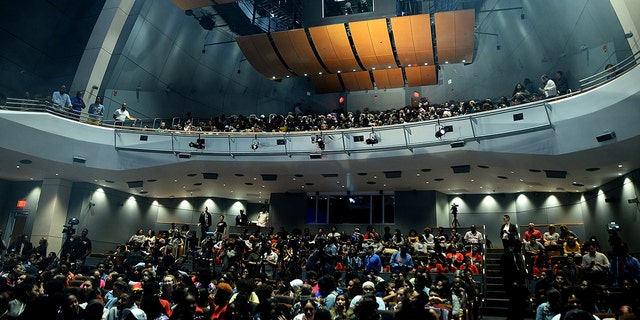 The Duke Ellington School of the Arts is moving forward with a decision to honor alum Dave Chappelle and will name its theater after the comedian.
(Photo by Shannon Finney)

Some students at the school staged a protest just weeks after Chappelle pledged $100,000 to the arts school.

Chappelle was also disinvited from a charity event for the theater-naming after he vowed to remove himself as a prospect altogether if those who criticized him put their money where their mouths were and donated more to the school than his supporters.

“Chappelle cares deeply about Ellington and its students and regards them as family,” the school’s memorandum states. “He made an unannounced visit before the Thanksgiving break to meet with his Ellington family and to hear directly from the few students who have concerns about his recent comedy special, ‘The Closer.’ He also wanted to directly express support for their safety in light of some disturbing online comments targeting the Ellington community.

“As an art institution, we educate our students on the importance of media literacy and art as a free and open form of expression to both reflect and challenge society. Although it appears that the clear majority of students at Ellington favor naming the theater for Dave Chappelle, we are seizing this moment to demonstrate the importance of carefully listening to every voice within our diverse and inclusive community.” Following the special, many called for it to be removed by Netflix, and a group of Netflix employees staged a walkout in October to protest.

He shared the message in a video posted to his Instagram, before adding certain “conditions” that needed to be met before a meeting could happen.

Last week, Chappelle received a Grammy nomination for best spoken word album for “8:46,” which documents a stand-up special centered on violence against Black Americans amid the angst surrounding the George Floyd protests. 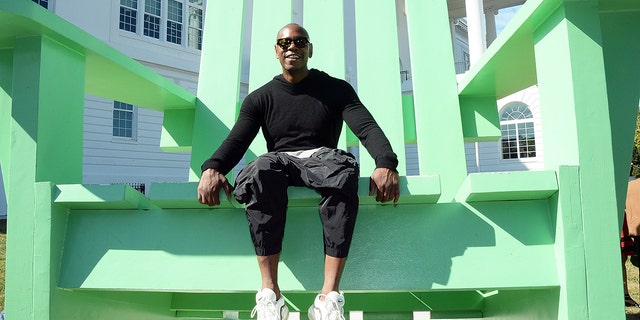 Dave Chappelle sits in the big green chair, a landmark on the campus of the Duke Ellington School of the Arts on September 29, 2017, in Washington, D.C.
(Photo by Shannon Finney)

The Recording Academy’s CEO Harvey Mason Jr. told Rolling Stone it would not “restrict the people who can submit their material for consideration” following the nominations of Marilyn Manson and Louis C.K.

“We won’t look back at people’s history, we won’t look at their criminal record, we won’t look at anything other than the legality within our rules: Is this recording for this work eligible based on date and other criteria. If it is, they can submit for consideration,” Mason told the publication in a statement.

“What we will control is our stages, our shows, our events, our red carpets,” he continued. “We’ll take a look at anyone who is asking to be a part of that, asking to be in attendance, and we’ll make our decisions at that point. But we’re not going to be in the business of restricting people from submitting their work for our voters to decide on.”