Fans Can't Get Over Brooklyn Beckham's Accent in New Video

Brooklyn Beckham has revealed more than he bargained for during a red carpet interview about cooking this week: in describing his new wife Nicola Peltz’s favourite dishes, he used a bizarre transatlantic accent…and it’s giving us Liam Payne vibes.

Appearing on the red carpet to celebrate his cover for Variety magazine’s Young Hollywood issue, the 23 year-old son of David and Victoria Beckham told People that he likes to spend hours cooking for Nicola, 27. So far so sweet, but Brooklyn — who has lived between the UK, Spain and the USA’s West Coast since his birth in 1999 — is distracting people with his Cockney-cum-Valleys accent.

Branded as “weird” and even “fake”, the post has been shared and his accent dissected multiple times, with many particularly intrigued by his pronunciation of the word “sauce”.

“The sawse😂❤️,” one person comment, while another put, “What in the Liam Payne is this accent?” Someone else said, “I just didn’t think that voice was going to come out of his mouth” and “Why aren’t we talking about the way he says pink SAWSE 😂.”

Alongside “angel hair pasta with pink sauce”, Brooklyn told the reporter that Nicola “loves the spaghetti bolognese that I make her”, adding that “it takes me like hours to make the sauce”. It’s easy to see why fans are perplexed — and not just because it takes Brooklyn a full working day to make the perfect ragu. Brooklyn’s accent does a lot of heavy lifting between the first and second uses of the word “sauce”, moving from a powerful London twang to something more suited to an L.A. resident. 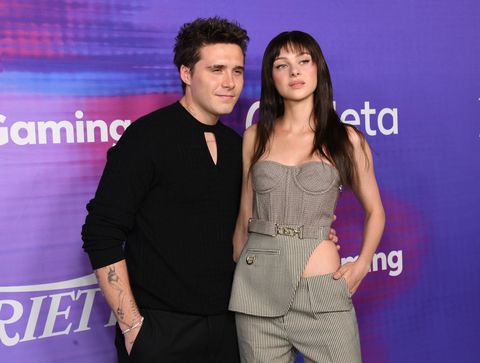 But hey, if someone spent 8 hours cooking our favourite dish, we’d be able to overlook any sort of accent too.