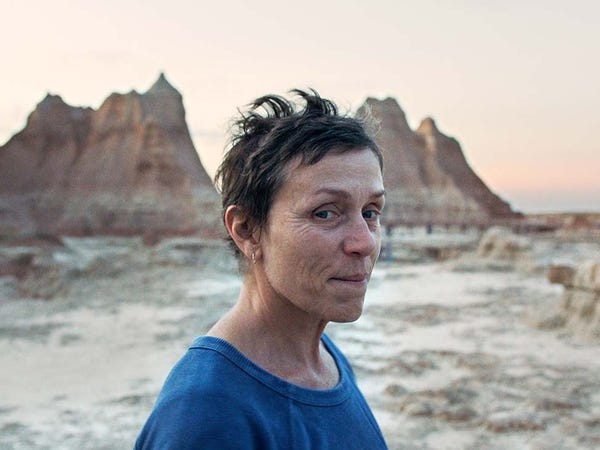 Oscar-winning actress Frances McDormand was able to play a character living out a van and desperate for work so convincingly in her new movie that someone offered her a job.

While doing a virtual press conference for the Venice Film Festival, where her latest movie "Nomadland" won the festival's top prize, McDormand revealed (via Variety's Marta Balaga) her process to play the movie's main character, Fern.

Set around the aftermath of the Great Recession in the early 2000s, we follow the character as she travels the West living out of a white van as a modern-day nomad. She sleeps at RV parks or parking lots, inside her van. And with the help of others finds work in whatever state she's in.

McDormand explained that to make the movie as realistic as possible, she and "Nomadland" director Chloé Zhao (Marvel's upcoming "Eternals") were part of a small production team of 25 people who traveled together for five months and visited more than seven states living with a community of van dwellers.

"We played the game of 'what if?' What if I was really one of them?" McDormand said.

McDormand added that the key to the process of being a nomad was "hearing their story, not telling mine."

She had some runway, as the movie is based on a book by Jessica Bruder, but being among the community of people who are highlighted in Bruder's work is what has made the movie a hit to critics and has garnered Oscar buzz for McDormand.

The actress said she knew the process the team was doing was fully authentic when she found herself in a Target one day during filming.

"In one town, in Nebraska, I went to the local Target and I was offered employment," McDormand revealed. "I was offered a form to fill out. I went back to Chloé and said: 'It's working!'"

"Nomadland" will open in theaters on December 4.

END_OF_DOCUMENT_TOKEN_TO_BE_REPLACED

END_OF_DOCUMENT_TOKEN_TO_BE_REPLACED
Recent Posts
We and our partners use cookies on this site to improve our service, perform analytics, personalize advertising, measure advertising performance, and remember website preferences.Ok