Holly Willoughby, 40, has told her good friend Piers Morgan, 56, he needs to “offset” some of his anger, after his particularly fiery onscreen clash with Alex Beresford on Good Morning Britain last month. The This Morning host advised the former Britain’s Got Talent judge to spend £249 on a “seven-hour mediation” class to help lower his blood pressure.

Opening up on which of his famous pals had reached out during his hour of need, Piers shared in his MailOnline column: “Holly Willoughby was more concerned about my blood pressure from all the GMB ranting.”

She asked him: “Do you meditate?”

Piers responded: “No. But I did drink a gin­seng latte today if you’re trying to woke me up?”

Holly exclaimed: “You need more than that – do an online course to offset some of this anger!” 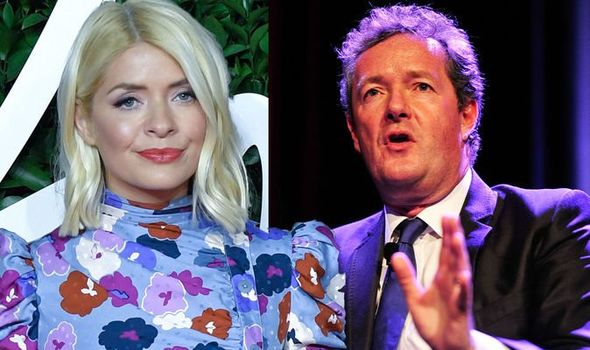 The former GMB host claims Holly then sent him a link to a pricey meditation class to help calm his mood.

He continued: “Holly then sent me a link to one that costs £249 for seven hours of meditation technique training live­ broadcasted to my home which would include advice on ‘managing difficult situations’, ‘nailing interviews’ and ‘making hangovers less horrible’.”

However, despite her best intentions, it seems the This Morning star’s advice went ignored by Piers, as he said the suggestion sounded “boring”.

The outspoken broadcaster added: “This would apparently all ensure I am ‘no longer ruled by my emotions.’

“Problem is that I can’t imagine any­ thing more boring than not being ruled by my emotions.”

Piers had left GMB after receiving backlash over his comments on Meghan Markle’s mental health, following her interview with Oprah Winfrey.

Meghan had spoken frankly to Oprah on the difficulties she faced while being in the UK as a working senior royal, during a CBS special programme featuring the Sussex couple.

In one particularly shocking statement, the duchess declared at one point she was “no longer wanting to be alive” during 2019, after struggling in the palace.

After the Oprah clip aired, the father of four said on GMB: “I’m sorry, I don’t believe a word she says.

“I wouldn’t believe her if she read me a weather report.”

The following day, Piers then proceeded to further address his divisive comments about Meghan’s mental health.

He said: “When we talked about this yesterday, I said as an all-encompassing thing I don’t believe what Meghan Markle is saying generally in this interview, and I still have serious concerns about the veracity of a lot of what she said.

“But let me just state on the record my position about mental illness and on suicide.

However, Piers ended up storming off the show after becoming embroiled in a heated debate with weatherman Alex over his rants on Meghan.

Alex, who has a white mother and a dad with Guyanese heritage, felt strongly about Piers’ most recent comments about Meghan and Harry, and told him: “This is absolutely diabolical behaviour.”