How Does Lamar Odom Really Feel About Khloe Kardashian?

Although Khloé Kardashian recently split from Tristan Thompson amid infidelity rumors, it seems that the saga of drama continues within her love life. Despite the breakup, Khloé is reportedly handling the breakup well. “For now, Khloé is single and seems okay with it,” an insider told People. “She continues to co-parent with Tristan and they spend time together as a family. Even though he has disappointed Khloé so many times, she is still very loyal to Tristan.” The source also mentioned that she doesn’t like when people criticize him, because the Boston Celtics star is ‘special’ to her.

One of those ‘critics’ of Khloé’s relationship is Lamar Odom. The former NBA player left a flirty comment under his ex-wife’s July [number] Instagram post. “Hottie,” Odom wrote alongside heart-eye and fire emojis under her bikini photo. Thompson also show his ex some love under the photo, but issued a shocking warning to the former Lakers’ player. “God brought you back the first time. Play if you want, different results,” he wrote, referencing Odom’s 2015 hospitalization following a near-fatal overdose.

Odom later took a dig at Thompson by retweeting a shady comment about the latter. “NBA Twitter watching Tristan Thompson pretend to act tough on Lamar Odom,” the tweet read, featuring a meme of several NBA players laughing. It’s clear that the two athletes are at odds over their mutual ex, but Odom seems to have an interesting reason why. 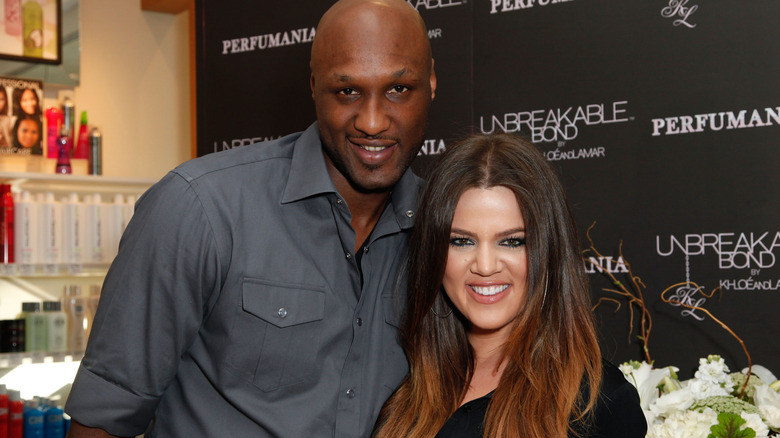 It looks like Lamar Odom is looking to reignite an old flame with ex Khloé Kardashian. After carrying on a petty beef with Tristan Thompson, Odom revealed his true feelings for the reality star during an appearance on “The Morgan Pormer Show” (via HotNewHipHop). When asked if he would consider getting back together with Khloé, he responded, “Oh in a heartbeat. I mean yeah I would.” There’s only one thing, however: “We’ll see if she gets back with me, that’s the bigger question.”

Khloé tied the knot with Odom in 2009 weeks after they met. Their relationship saw ups and downs, which was chronicled during the two seasons of E! Reality show “Khloé & Lamar” in 2011 and 2012. Their relationship ended in 2013 upon discovery of Odom’s infidelity and drug use, but their divorce was postponed after the former NBA star nearly died of an overdose in 2015.

Despite their tumultuous relationship, it’s clear that there are still some unresolved feelings on Odom’s end. As for Tristan Thompson, Odom isn’t too bothered by the former’s low blow comment. “He don’t really know me,” Odom told TMZ. “What did Jesus say, ‘God, forgive those for what they not know,’ so he don’t really know me, because that could’ve really turned ugly.” He added that Thompson “is a Black man, he’s in the NBA, so we’re fraternity brothers, at the end of the day. I’ll just leave it there. He made a mistake by saying that.” This love triangle doesn’t seem like it’s ending any time soon.