Jaden Smith and Chloe Bailey Caught Getting Flirty on Instagram

The ‘Karate Kid’ star appears to shoot his shot with the one-half of Chloe x Halle while commenting on her sexy photos, despite acknowledging that she is ‘dangerous.’

AceShowbiz –Jaden Smith and Chloe Bailey are apparently into each other lately and they have no intention to keep their feelings to one another a secret. The two young stars have caught fans’ attention as they’re getting flirty on Instagram.

One of the evidence was found on Chloe’s Thursday, April 29 post. The one-half of Chloe x Halle showed no remorse despite criticism over her sultry contents, posting new sexy snaps of her rocking a black leather mini dress that bared her cleavage and toned tummy.

Striking various seductive poses against the wall, the 22-year-old singer wrote in the caption, “she’s dangerous.” Jaden, noticing Chloe’s post, couldn’t deny her charm as he acknowledged in his comment, “She really is.” 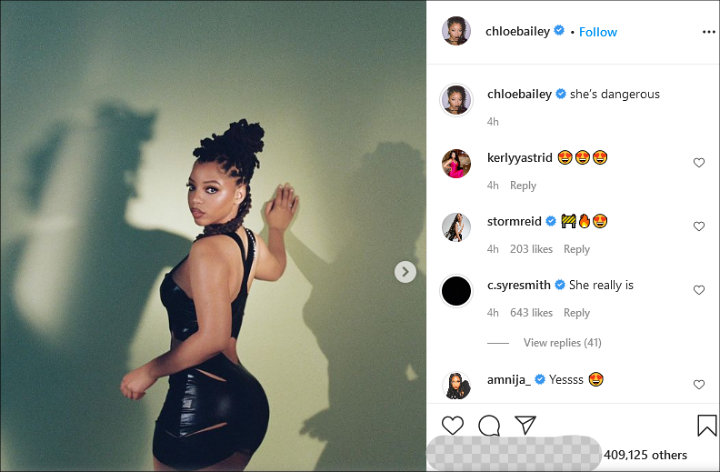 And apparently the feeling is mutual. One week prior, Chloe also shot her shot with Jaden when the 22-year-old star posted a picture of him staring blankly to the camera while sitting and leaning against the wall in a white long-sleeve T-shirt and jeans.

“I’m Tryna Deluxe Myself,” the son of celebrity couple Will Smith and Jada Pinkett Smith captioned it. Chloe then made her presence be known by simply leaving a fire emoji in the comment section. 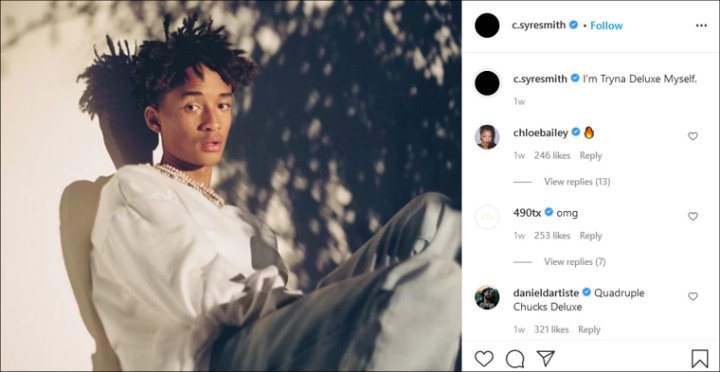 It’s unknown how long Jaden and Chloe have been interested in one another or if they have linked up beyond their social media interactions, but fans have shown their support for the possible romance. “They would make a cute coupe,” one person commented. Another agreed, writing, “Right! That would be a nice hookup!” A third echoed the sentiment, “honestly….i think they would be cute together.”

Some others, however, doubt that Jaden and Chloe are really each other’s type. “It’s a running joke pretty much every where that he only dates,” one skeptical user commented, adding, “White girls, calm down it’s not that serious.” Another warned Chloe, “Nope. Chloe stay away from jaden weird a**,” as another shaded Jaden and his exes, “Chloe would be a step up from cokehead thieves.”