Home » Celebrities » James Martin: ITV chef in despair after cooking insult ‘I can’t get away with that!’

James Martin: ITV chef in despair after cooking insult ‘I can’t get away with that!’

James Martin featured television presenter and wheelchair basketball player Ade Adepitan, on his hugely popular cooking show over the weekend, but was left feeling a little put out when his guest insulted him. After making a huge Prawn Biryani, Ade was shocked at the size of the dish when James invited him to the table to try it.

I can’t get away with that!

Plonking the large bowl in front of him, Ade’s face went from eager to disbelief: “Not all of that?!” he exclaimed, after James passed him a fork.

While James talked him through the intricate ingredients he included to whip up the Indian recipe that was filled to the brim with eggs, prawns and rice, the TV presenter had a little fact of his own.

“I was once told,” he began before James interrupted: “Here we go…”

Ade continued: “The way you have your eggs shows which class you’re in. 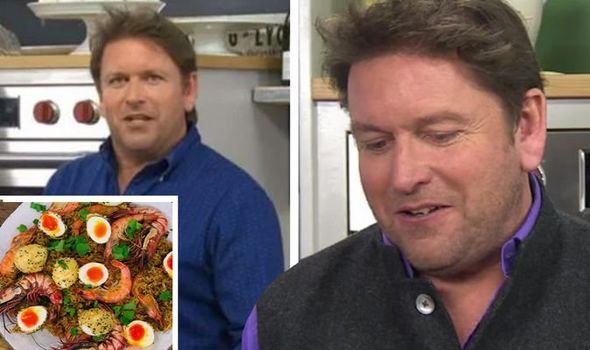 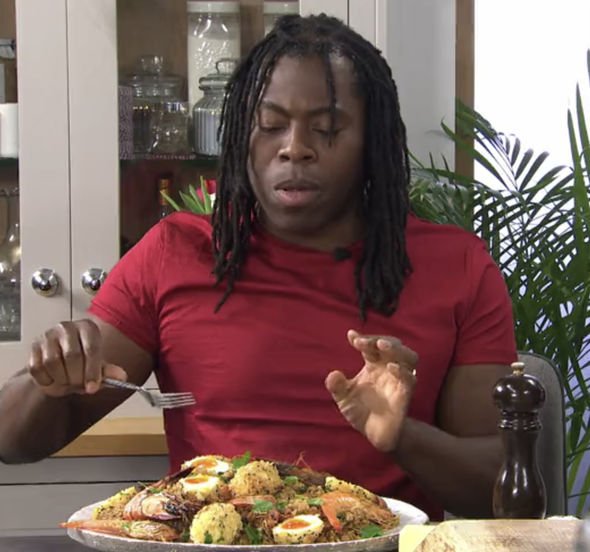 “So, if you have fried eggs then you’re working class and I was told that if I had poached eggs then I was middle class.

It seems the chef didn’t really know where he was going with his story, as he sheepishly told his guest that what he was eating were in fact boiled eggs.

“They’re boiled eggs and deep fat fried, I don’t know what that makes you,” the chef explained worriedly. 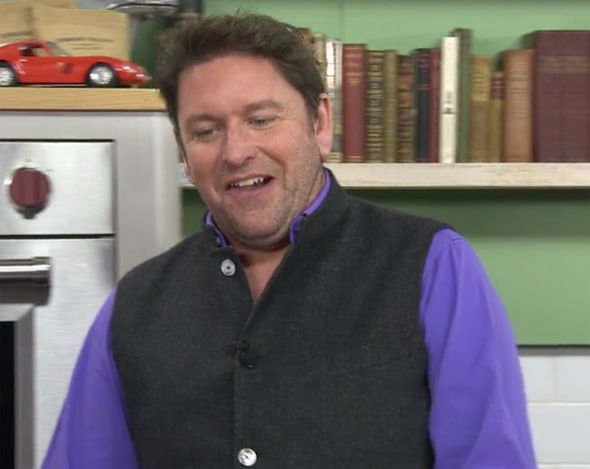 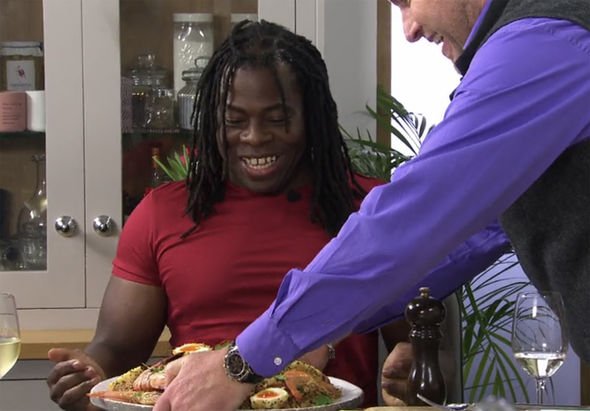 Ade suddenly blurted out: “Scottish,” appearing to poke fun at the fact James hadn’t made the dish properly.

James roared with laughter, as he took it on the chin: “Good way to start! I can’t get away with that!”

It’s not the first time this week James’ food has taken a battering.

On Monday’s This Morning, he branded Eamonn Holmes “chunky and a bit thick” in a cheeky swipe after he insulted his refined take on the classic fish finger sandwich.

And while his wife Ruth Langsford, appreciated James’ efforts to make the family favourite look presentable, Eamonn scoffed at the unnecessary trouble.

“That’a not a fish finger, that’s a fish arm you’ve got there!” he laughed, when James presented the large fishy treat.

“That’s the fattest fish finger I’ve ever seen,” he mocked the modern take on the British classic.

Noticing that the presenter was unimpressed with his creation, James made him his very own by throwing a spare fish finger onto a plate and sandwiching it between two dry pieces of bread.

“Oh, he likes a bit of ketchup on that,” he mimicked, as he squirted the red sauce all over the messy plate.

As the daytime show presenters began to tuck in to the delicious meals that had been made previously, Eamonn shook his head as Ruth had to use a knife and fork to eat hers due to the lathering of mayo and layout of the dish.

James suddenly interrupted: “Ruth, this is named after you, it’s delicate it’s sweet, it’s refined, it’s perfect,” he said, holding the well-presented dish, as she blushed with glee.

He then picked up the sloppily prepared one, continuing: “This one is named after your husband. A bit chunky and a bit thick.”

Ruth was quick to defend her hubby, saying: “There’s many things I say about my husband, but he’s not thick that’s for sure.”

“Only joking,” James quickly added, before the exchange got heated.

END_OF_DOCUMENT_TOKEN_TO_BE_REPLACED

END_OF_DOCUMENT_TOKEN_TO_BE_REPLACED
Recent Posts
We and our partners use cookies on this site to improve our service, perform analytics, personalize advertising, measure advertising performance, and remember website preferences.Ok