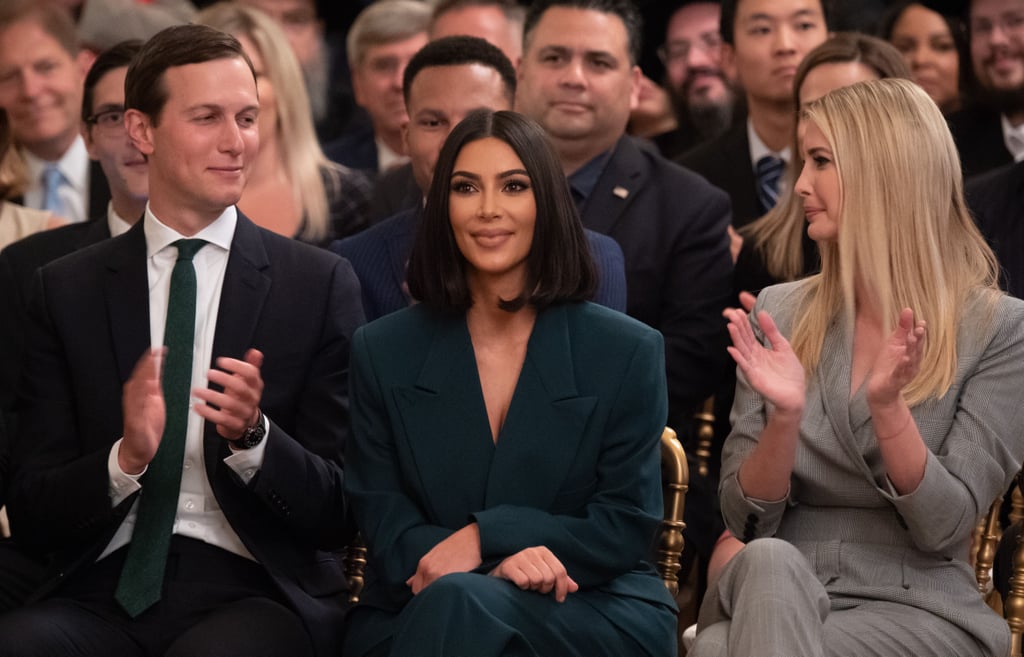 Kim Kardashian paid a visit to the White House to discuss prison reform on Thursday. The 38-year-old future lawyer attended an East Room event to talk about efforts to help better the lives of formerly incarcerated people. Rocking a forest green suit, the beauty mogul sat in between senior advisor Jared Kushner and Ivanka Trump during the meeting, which President Donald Trump and cabinet members also attended. She then took center stage to present a new ride-sharing partnership with Lyft that will give former prisoners gift cards to help them travel to and from job interviews.

“Everyone wants the community to be safe, and the more opportunity we have and that they have and the support that we help give them, the safer everyone will be,” Kim said. “I’m just so thankful to everyone here that’s in support and so proud of this partnership with the ride-share organization.”

Kim’s passionate involvement in criminal justice started after she learned about the case of Alice Marie Johnson, a grandmother who was serving a life sentence without parole for drug offenses. Last year, Kim visited the White House to help Alice receive a pardon. Shortly after, Alice was granted clemency and released from prison.

Recently, Kim opened up about pursuing a career in law, telling Vogue, “I just felt like the system could be so different, and I wanted to fight to fix it, and if I knew more, I could do more.” On Instagram, she also responded to people who have told her to stay in her lane, writing, “I want people to understand that there is nothing that should limit your pursuit of your dreams, and the accomplishment of new goals. You can create your own lanes, just as I am.”

Kim also revealed that she’s currently studying for the “baby bar” — a one-day test that’s a mini version of the larger bar exam. To prepare, she’s spending around 18 hours a week reading and learning about criminal law, torts, and contracts. She plans on taking the actual bar exam in 2022.