Donald Trump has yet to announce whether he’s running for president again in 2024, but it’s clear that he still has plenty of supporters within the Republican party. People are still flocking to rallies to hear him speak, and, according to an Emerson College Poll, registered voters gave him a slight edge over President Joe Biden in a potential rematch, with 47% of respondents backing the former president and 46% saying they’d vote for Biden again.

Some Donald Trump allies and members of his inner circle are almost certain that he’s going to run. While speaking to “Fox Across America” host Jimmy Failla, Ohio Congressman Jim Jordan said that he’ll enthusiastically back the former president again. “He hasn’t announced and I don’t know for sure, but if I’m betting I would bet the farm, bet the house, Jimmy’s home, I would do whatever, because I think he’s exactly what we need,” he said. Donald Trump adviser Jason Miller suggested that Jordan will get his wish, basing his assessment of the situation on a conversation he had with the former president. He told Cheddar News that the likelihood he’ll run is “between 99% and100%.” And on September 2, New York Times reporter Maggie Haberman tweeted that the former real estate mogul will announce he’s running “sooner rather than later.”

Even if Donald Trump does make a second bid for the White House, his niece, Mary Trump, believes her uncle simply won’t have the time to campaign effectively. Read on to learn why. 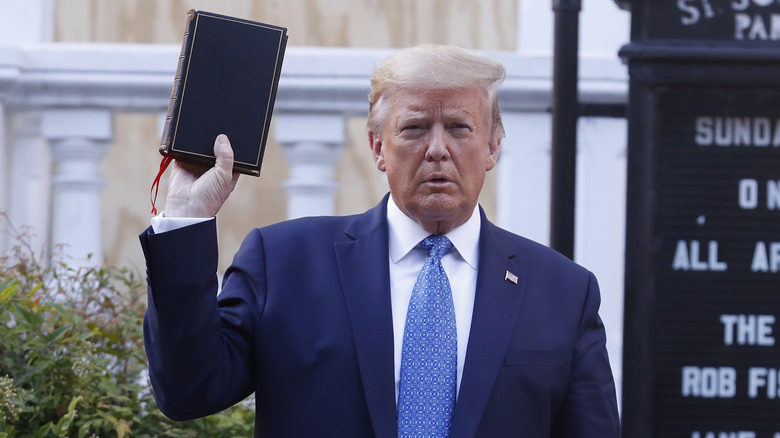 Donald Trump’s niece Mary Trump, psychologist and author of the book “Too Much and Never Enough: How My Family Created the World’s Most Dangerous Man,” recently appeared on “The Carlos Watson Show” to discuss her uncle. She revealed that the last time she saw Donald Trump was in 2017, but they might meet again in court someday — she’s accused him of fraud and sued him for cheating her out of her inheritance from her late father (per CNBC). “There’s a possibility that he’s going to be too busy defending himself in court or too busy giving depositions to stay engaged politically,” Mary said.

Mary pointed out that her lawsuit isn’t the only one that will be keeping her uncle occupied in the coming years. Rolling Stone has a rundown of some of the major civil suits and criminal investigations he’s facing, which include a lawsuit from Capitol police officers who accused him of inciting a riot and the Manhattan district attorney’s criminal probe of the Trump Organization.

However, Donald isn’t necessarily focused on his legal woes right now. He’ll spend the evening of 9/11 calling a boxing match at the Hard Rock Casino in Hollywood, and he’s scheduled two more political rallies. If he does win the presidency again, he will have to set aside time to deal with lawyers and court reporters.