PATRICK MARMION REVIEWS: A daring Dane – Cush Jumbo makes a magnetic Hamlet… but a riveting production was not to be

What If If Only (Royal Court Theatre, London)

No one ever needed extra time to ponder whether Hamlet should bump off the uncle who murdered his father and married his mother. It’s already built into Shakespeare’s drama, with Hamlet’s famous ‘to be or not to be’ procrastination.

But extra time is exactly what we get in the Young Vic’s frustratingly ponderous new revival of the play starring Cush Jumbo and Adrian Dunbar.

Cush Jumbo? Yes, it’s what’s known in the trade as gender-blind casting, with the actress playing our anguished young prince. Jumbo is best known from TV’s American legal dramas The Good Wife and The Good Fight, but she’s got oodles of experience in Shakespeare, too. 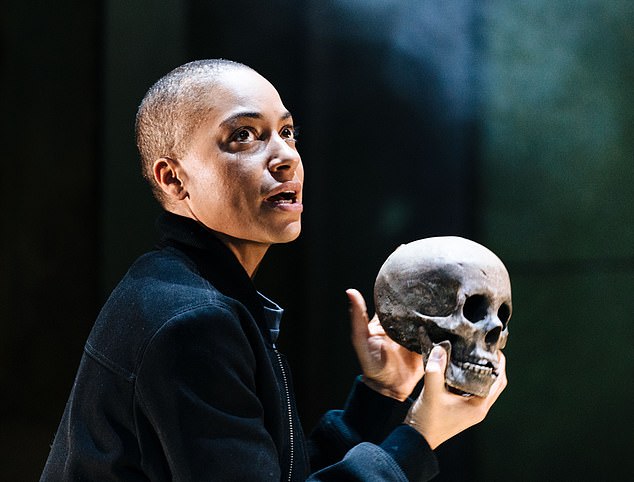 She has played the wronged Kate in The Taming Of The Shrew, tomboy Rosalind in As You Like It — and Mark Antony in Julius Caesar.

To her credit, Jumbo carries the show and the company for more than three hours, with a performance that’s thoughtful, streetwise and fitfully magnetic.

Nor is there any question of turning Hamlet into a princess. She’s more like a disaffected teenage boy in loose jeans, leather jacket and shaven head.

There is tenderness, and a sense of guilt at the collateral damage heaped on Ophelia during Hamlet’s forever stalling mission to take revenge on his evil uncle (Dunbar).

At times, Jumbo seems hollowed out by the task in hand. At others, she springs startlingly to life.

It’s an absorbing display, worthy of livelier acting around her. 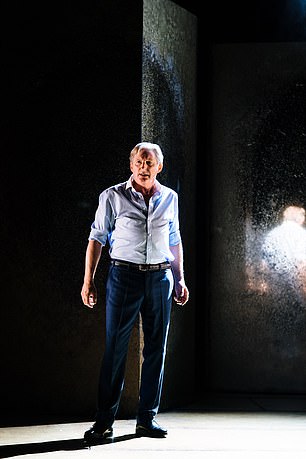 There is tenderness, and a sense of guilt at the collateral damage heaped on Ophelia during Hamlet’s forever stalling mission to take revenge on his evil uncle (Dunbar)

Unfortunately, Greg Hersov’s production leaves chasms between cues. I almost wished Dunbar would whip out his Line Of Duty cap and, channelling Superintendent Ted Hastings, arrest some of these fellas for loitering without intent.

He could start with Tara Fitzgerald, as Hamlet’s mother Gertrude, who sometimes seems more interested in her mobile than engaging with others — although when Hamlet pins her down in her bedchamber he secures her undivided attention.

As for Dunbar, as Claudius he is a slow, measured and saturnine killer king — more suit than sinner. There are some sparky moments. Hamlet’s faithless friends Rosencrantz and Guildenstern, as played by Taz Skylar and Joana Borja, are less gormless patsies and more Ibiza party animals. And Norah Lopez Holden’s Ophelia combines teenage defiance with the awkwardness of grief to moving effect.

But as her dapper father Polonius, Joseph Marcell really does need to get a move on.

Anna Fleischle’s dull, blockish design under a builder’s rectangle of an arch does not conjure up much sense of place.

A shot of adrenaline is needed and, although Jumbo doesn’t exactly supply that, she does at least lift the whole company with her showbiz stardust.

The production is sold out but readers can judge for themselves when it’s streamed live from October 28 to 30 (youngvic.org).

At least we can’t accuse Caryl Churchill of detaining us too long with her 17-minute sketch at the Royal Court. It’s what you might call a stage poem about a bereaved man (John Heffernan) visited by the ghost of ‘a future that hasn’t happened’. Played by an older woman (Linda Bassett), the Future brings hope, then despair and finally anxiety.

What If If Only actually makes even less sense than that; though like a lot of poetry, it’s curiously touching in ways that aren’t easily explained.

My hunch is that it’s about the absolute loneliness of grief, its hallucinatory properties and its peculiar comedy of detachment.

It’s proving surprisingly popular, given that top tickets are priced like a premium rate phone call — at 50p a minute.

Some may feel, though, that the theatre’s resources might have been better put towards a new play by an emerging writer; rather than an amuse-bouche by a grande dame who’s been haunting the building for half a century.

A version of the Hamlet review appeared in earlier editions.

The Long Song was the novel that followed Andrea Levy’s best-known book Small Island. Set on a 19th-century Jamaican sugar estate, it’s the story of July, a child taken from her mother to work as a maid in the big house. 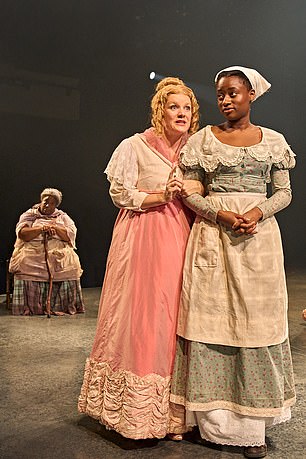 She grows up to see the overthrow of slavery and become the mistress of the plantation owner — before being separated from her own child when he is sent to England.

Levy’s mission in the book was to assert the dignity of enslaved people but also to reconcile that with their conflicting aspirations, set in part by British colonialists.

As in Small Island, Levy doesn’t shirk the difficult questions about the way class, cultural and racial status become entangled.

Most importantly, this is an epic account of a poorly documented period in British colonial history. Llewella Gideon, as old July relating her life story to her returning son, is a cranky and eccentric joy who loves spicy pork and cutting people down to size. Tara Tijani, making her professional debut as young July, is ambitious, shrewd and resilient.

And Suhayla El-Bushra’s script distils a strong sense of the enslaved workers’ cultural independence (thanks also to period African music from Michael Henry).

Although the white slave owners are a little two-dimensional, Olivia Poulet as the mistress catches the anxiety of the settlers, while Leonard Buckley nails the compromised idealism of her squeamish husband who’s on a mission to move from slavery to a wage-based workforce.

Charlotte Gwinner’s production, performed in front of a row of sugarcane plants lit with the warm light of the Caribbean — and contrasted by heavy European antique furniture — is lucid and light-footed.

It was also very warmly received by a hugely appreciative Chichester audience.