Princess Charlotte, seven, took a leaf out of Zara Tindall‘s book when she was captured copying her second cousin as she waved at the Queen’s Jubilee Pageant on Sunday.

Zara was sat behind the young royal and perfectly demonstrated her elegant wave to the public who gathered on the Mall for the celebration.

Charlotte turned back to look at Zara and as soon as she saw her joined in – and it was so sweet.

Moments before, Charlotte was rocking out to Dancing Queen by Abba, whilst looking at her Jubilee programme.

The royal youngsters were joined by Lena Tindall and Savanagh Phillips

She was sat with the other four members of her family including Prince Louis, who didn’t attend the exciting Party at the Palace concert on Saturday, but truly stole the show during the event with his cheeky behaviour.

Mike Tindall, who was sitting behind the three-year-old, was pictured giving him the, ‘I’ve got my eye on you’ sign while pointing his middle and forefingers towards Louis’ eyes.

The Duchess of Cambridge, who was next to her son, could be seen laughing at the humorous exchange. 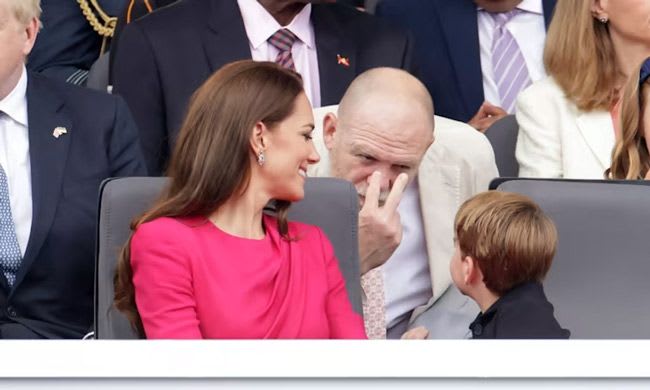 Mike was there with his wife Zara and their two daughters

The three royals were joined by Prince William, Zara, Prince George and Princess Charlotte, as well as Prince Charles and the Duchess of Cornwall among other senior members of the family for the Pageant.

The hilarious moment between Prince Louis and Mike comes just days after the youngest child of the Duke and Duchess of Cambridge was pictured making hilarious faces at the crowds from the Buckingham Palace balcony while watching the military flypast at Trooping the Colour on Thursday.

The young Prince was seen happily waving towards the sky before later holding his hands over his ears as the aircraft flew overhead, at which point Kate was spotted bending down to have a word with him.

Ed Sheeran brought the four-day celebration to a close with a performance of his song Perfect in a special tribute to the Queen’s historic 70 years on the throne.

Make sure you never miss a ROYAL story! Sign up to our newsletter to get all of our celebrity and royal news delivered directly to your inbox.