Home » Celebrities » Sophie Turner reveals she once tried to get Matthew Perry to ask her out: 'That was just embarrassing'

Sophie Turner reveals she once tried to get Matthew Perry to ask her out: 'That was just embarrassing'

In a recent interview with Rolling Stone, ‘Game of Thrones’ star Sophie Turner opened up about her relationship with fiance Joe Jonas, and her love life prior to her engagement. Turner was prepared to be single for the rest of her life prior to meeting Jonas, but said she, ‘met enough guys to know – I’ve met enough girls to know.’ When questioned further about the comment, Turner said, ‘Everyone experiments… I love a soul, not a gender.’

“Game of Thrones” and “X:Men: Dark Phoenix” star Sophie Turner may be happily married to Joe Jonas now, but years ago she tried her hand at flirting with “Friends” star Matthew Perry.

The story dates back to a 2016 tweet in which the now 23-year-old star gushed over the 49-year-old actor doing some work on the block where she lived. Apparently, Turner is a “Friends” fan and was star struck by the actor’s presence.

“Holy balls. Chanandler Bong himself is rehearsing his play right next to my home,” she wrote in the tweet.

In a video for Twitter, Turner answered for some of her past posts on the social media site, including the above-mentioned one. That’s when she revealed there was more to the story than simply being awed by a celebrity. 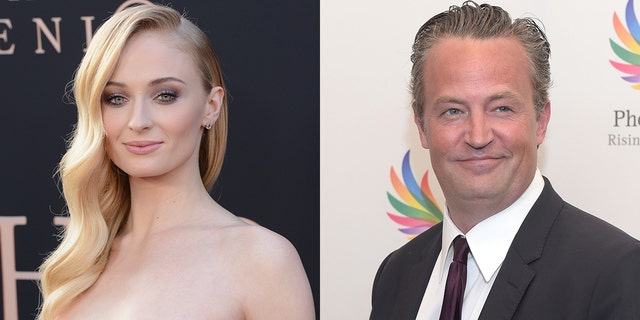 While her plan was sound in theory, in practice her timing was a bit off. She claims that when she finally approached Perry, his smoke was already lit. The star then admitted that her intention went beyond interacting with an actor she admired.

“That was just embarrassing. I thought he might see this tweet and then, I don’t know, reach out to me, and ask me on a date or something,” she said. “But he didn’t.”

Fortunately, things worked out for her love life in the end. Turner married the Jonas Brothers star in a surprising Las Vegas ceremony just after he performed at the Billboard Music Awards in 2019. The groom’s brothers and bandmates Kevin and Nick were part of the ceremony, which was officiated by an Elvis impersonator.

Jonas proposed to the Jean Grey actress in 2017 after dating for more than a year.