Cheyenne Floyd revealed the sex of her second baby! The 28-year-old Teen Mom OG star announced on Friday that she and boyfriend Zach Davis are having a baby boy. Cheyenne is already mother to 3-year-old daughter Ryder, whom she shares with her ex, Cory Wharton.

“It’s a BOY! I might still be in shock that I am having a boy,” she captioned a video montage of her gender reveal party. “Happiness is an understatement to try to explain how we feel. My family and I are elated!! Ryder wanted a baby brother, and swears she knew this whole time. I know she’s going to be an amazing big sister. Mommy and daddy love you & can’t wait to meet you.”

In her Instagram Story, after sharing more photos from the party and adorable decorations, she wrote that their reveal was “almost a month ago.”

“So keeping his gender between friends and family was hard,” she wrote alongside a pic of her and Ryder. “But I’m surprised none of us slipped. Thank you again. Now I need places to get boy clothes LMAO I feel like I’m going into foreign territory.” 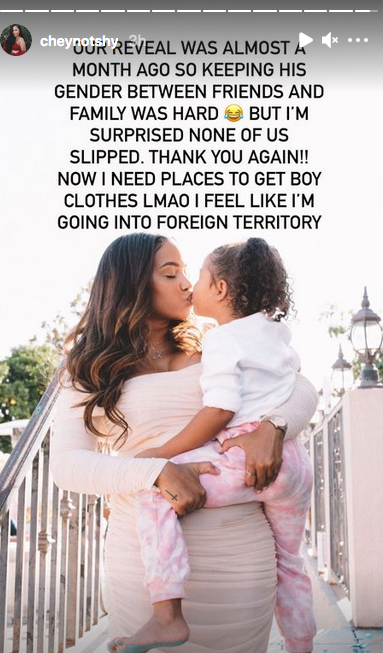 Cheyenne first teased her gender reveal with a handful of photos from her party, which included a stunning balloon backdrop that reads, “Here for the sex.” In the snaps, she poses with her daughter and Zach.

Cheyenne got her start on MTV’s The Challenge before becoming a series regular on Teen Mom OG in 2018. After some ups and downs with Cory, which were documented on Teen Mom OG, Cheyenne moved on to Zach and Cory moved on to his girlfriend, Taylor Selfridge. Cory and Taylor welcomed their daughter, Mila, in April.

Cheyenne revealed that she was pregnant last month, sharing how excited Ryder was to be a big sister.

“Ryder is so excited to be a big sister again and is already super protective over my bump,” Cheyenne expressed. “She prays for the baby every night and kisses my belly every morning.”

END_OF_DOCUMENT_TOKEN_TO_BE_REPLACED

END_OF_DOCUMENT_TOKEN_TO_BE_REPLACED
Recent Posts
We and our partners use cookies on this site to improve our service, perform analytics, personalize advertising, measure advertising performance, and remember website preferences.Ok