Can we talk about Sophie Turner for a sec? I’m not really sure whether I want to be her or whether I want to party with her (probs both), but girlfriend’s bachelorette bash looks bomb AF, so please teach me your ways, Sansa. Teach. Me. Your. Ways. Seriously, you guys, the photos of Sophie Turner’s bachelorette party with Maisie Williams in Benidorm, Spain — which totally sounds like the name of an eighth kingdom in Game of Thrones, BTW — are everything. I mean, her whole squad is decked out in brightly-colored wigs to go out clubbing and drink Smirnoff Ice through green and red straws, and if that’s not the stuff of bachelorette dreams right there then I don’t know what is.

It all started on June 9, when the GoT star flew to Benidorm on a private jet with Williams — who will be the maid of honor at Turner’s second wedding to Joe Jonas in France this summer — and a posse of her closest friends, some of whom are reportedly in the wedding party.

"Sophie rented out a luxurious penthouse suite at the hotel," a source told E! News. "Sophie has always been a huge fan of Spain and she knew that it would be a fun place to party and celebrate her upcoming wedding. Maisie helped coordinate a lot of the trip but everything was taken care of by Sophie. She wanted her friends to have a lot of fun and wanted it to be a huge party weekend."

Looks like she got her wish. While the sisters Stark have both been MIA on Instagram during the festivities, Turner’s friends Blair Noel Croce, India Walford, Ellie Wasserberg, and Ellie Johnson have been kind enough to hit up their IG feeds and keep us all updated.

Take a look at these awesome shots of #Sophie’sSquad getting wiggy with it. Yeah, I just made up that hashtag. But I totally think they should be using it, don’t you? 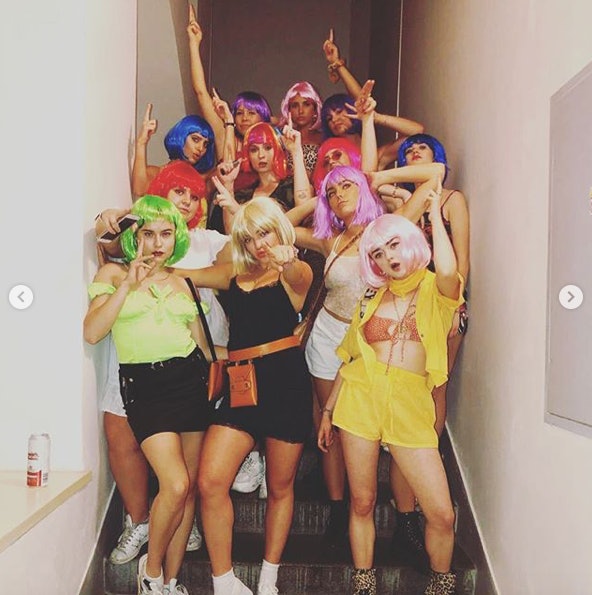 Now check out the crew getting Iced in those sleek, colorful bobs.

So amaze. If you wanna make this a group costume for Halloween 2019, HMU. Dibs on Williams in the pink wig and Stella McCartney cross-body bag.

Meanwhile, I’m loving how Turner’s wig is all Rainbow Bright while everyone else’s is a solid color. Because brides are special.

All that’s missing is a cherry-flavored Ring Pop.

In this next shot, it looks like Turner traded in her multi-hued wig for one that’s baby pink. I guess we’re on a different night now? She’s also got a face tatt and is holding up a fake palm tree because… well I have no idea, so you guys can go ahead and caption this one yourselves: 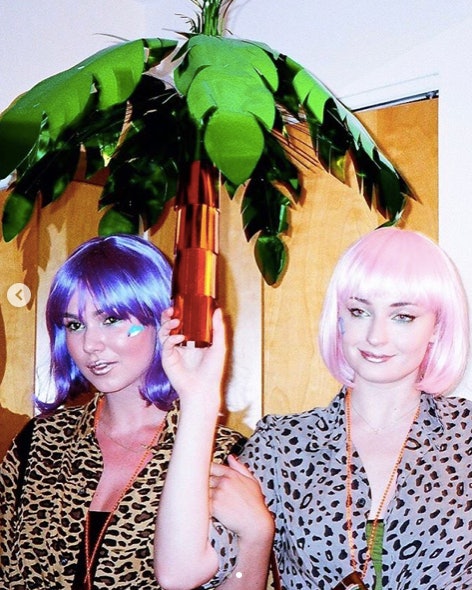 According to E!, the crew has been hitting up nightclubs and dancing up a storm over the last few days, but now they are in Prague walking around the city and checking out all the old architecture, so that’s prob what’s going on in this picture: 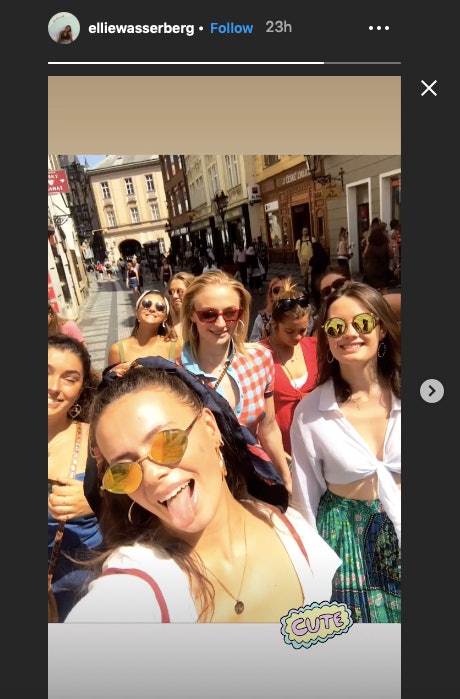 Honestly, this whole thing is giving me major FOMO and I just want to hop a flight to Prague so I can crash this party ASAP.