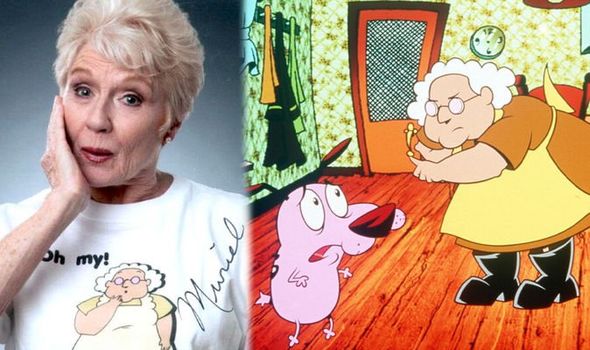 Thea Ruth White, best known as the voice of Muriel Bagge in the animated series Courage The Cowardly Dog, has died after a battle with liver cancer. She was 81 years old.

Her nephew Brad Zitzner, took to social media on Sunday August 1 to announce her passing, revealing that his aunt had died from complications from an infection after undergoing surgery to treat her cancer on Friday 30.

He wrote on Facebook: “Sadly we lost our legendary Feefer (the voice of Muriel) on Friday morning after she fought hard with courage to try to beat her liver cancer and to resume life or to die trying.

He described White as the “greatest cheerleader” to the family and said the pain of losing her is “so deep.”

The emotional tribute continued to read: “Thanks Feefer for your leadership of your family.

“The role you have taken with my kids and all your family sadly can’t be replaced.”

He added: “I can see hundreds of fan tributes already online so your love was shared far and wide.

“I’ve never met a person who knew you who didn’t think you were the greatest person alive.

“That lasted even up through your stay in the hospital as I’m told the nurses and doctors also fell in love.”

The statement concluded: “You loved life and even know I know the final outcome I love your decision to go for it and to try to win. Damnit sticks!”

Zitzner shared some personal family photos alongside the post, and added images of her character from the beloved animated series.

The Cartoon Network star studied at the Royal Academy of Dramatic Arts before launching her career as an actress.

She retired after marrying her husband Andy in 1983, whom she had met when the two performed together in the play Goodbye Charlie.

They remained married until his death in 2015.

White returned to acting in 1999 when she was offered the role of Muriel on Courage the Cowardly Dog.

She voiced the animated character during the entire series, which ran until 2002, and reprised her role several times for other projects.

The actress’ brother John Zitzner, also shared the sad news of his sister’s passing, posting a video of White sitting outside on a wooden bench.

In the video, she cheerfully asked for some photos of the “little and big children” in her family “frolicking in the ocean”.

“That will speed my recovery,” she joked.

“I’ll be up and at ’em in five minutes after they cut me open. Well, ish.”

Alongside the video, John explained it was recorded before her surgery.

He shared another video of her recording a message for him and his family while she was undergoing treatment in the hospital, where she was laughing and joking as she struggled to use her Muriel voice.

“It’s the anesthesia!” she admitted, giggling.

John captioned the video: “Thanks to Susan Bookshar for recording this last Sunday, July 25 some 5 days after her first surgery.

“Wishing her family good times as some of us were in Chautauqua for a few days, contemplating she would join us later in the week. Her last breath was Friday July 30 at 11:05 am. 2 days after her second surgery.”