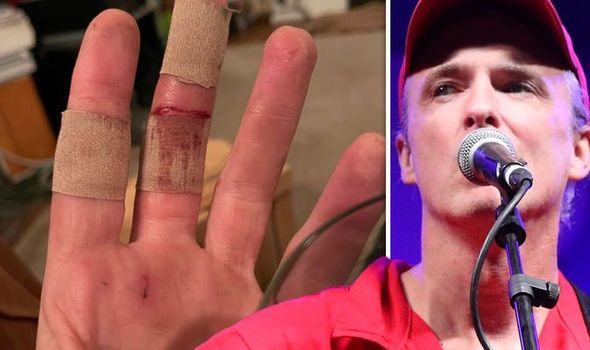 Travis singer Fran Healey has revealed that he was “mauled” by a sausage dog after trying to rescue it from a busy road. The rockstar, 48, took to Twitter where he said that the dachshund had “mauled the s**t” out of his hand after he rescued it from a three-car accident, while showcasing his gory injuries.

In view of his 46,400 followers, Travis posted a series of snaps of his injuries.

The star revealed a particularly nasty looking wound on his middle finger, while the next picture saw his hand covered in blood-soaked plasters.

In a comment, the star explained how he sustained the injuries.

Travis wrote: “I was driving down my hill and as I rounded a corner there were 3 cars jackknifed and from the middle of the chaos ran a daschund. (sic)

“So I jumped out and chased it up the hill.

“Cars bomb down our hill and it would have been toast,” Travis explained.

However, he went on to reveal that he didn’t get the grateful thank you from the dog that he had expected.

The singer said: “So I tried to pick it up and it mauled the s**t out my left hand.

“I held on, hoping to chuck it into our porch but then I slipped and it bolted off, leaving me pishing blood all over the shop. So much blood.”

The star said that an onlooker called medical professionals to the scene due to the amount that he was bleeding, but a fire engine arrived instead.

Travis said: “Then all the neighbors came out and one of them called an ambulance.

“I ran into the house and poured alcohol over the wounds… then I came out but it wasn’t an ambulance… it was a massive fire engine.

“And I have to say, 5 Calvin Klein models got out and then I’m telling them about the daschund and they suggested urgent care.”

Travis revealed that the scene was causing a hold up in the road, all while he kept on bleeding from being bitten by the animal

“By this time there was about 20 cars waiting to pass, I’m pishing blood (by the way ladies and some boys… I totally now get the fireman thing) anyways I drove to Urgent Care on Selma and they cleaned me up good and now I’m here and my finger is patched up and bloody sore.

Travis went on to reveal that the dog was eventually returned to its home: “The dog… is fine.

“Was cornered at the bottom of the hill and the owner, who lives in Stevie Nicks old house (pop pickers), was reunited,” he ended the thread.

The star later gave worried fans an update, posting a gory snap of his hand which featured multiple bloody wounds.

He captioned the picture: “Maybe shouldn’t play the guitar for a couple of weeks… or maybe should.”