It’s been three years since Anthony Bourdain was found dead at age 61 at Le Chambard Hotel in France, where he was working on a new episode of his long-running and award-winning CNN show “Parts Unknown,” per Deadline. “It is with extraordinary sadness we can confirm the death of our friend and colleague, Anthony Bourdain,” the network said in a statement at the time. “His love of great adventure, new friends, fine food and drink and the remarkable stories of the world made him a unique storyteller. His talents never ceased to amaze us and we will miss him very much.”

The news of his sudden death was met by profound sadness all around the world — and still today, there are never-before-heard details surrounding the gifted chef and storyteller’s life and what could have led to his tragic death. A new documentary called “Roadrunner: A Film About Anthony Bourdain” explores rumors surrounding Bourdain’s former girlfriend, actor Asia Argento, and their relationship at the end of his life. Scroll ahead to find out what the documentary delves into. 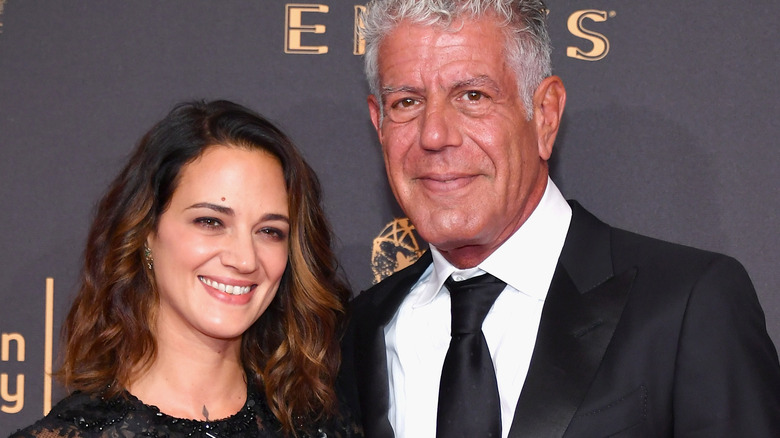 “Roadrunner: A Film About Anthony Bourdain,” which opens in theaters on July 16, promises to pull back the curtain of Anthony Bourdain’s life and examines his relationship with Italian actor Asia Argento. She was dating the celebrity chef at the time of his death. Argento was not interviewed for the documentary, but the film alleges he had become “addicted” to her, per the Daily Mail, after she came on to direct an episode of “Parts Unknown.”

According to the Wall Street Journal, the documentary also “addresses a tabloid scandal that surfaced days before the chef’s death alleging that Ms. Argento was involved in another romance outside her relationship with Bourdain.” The TV host died just five days after the photos were taken.

“Roadrunner” director Morgan Neville said that despite not wanting to “get one inch deeper into that story because it was quicksand,” adding that it was “really complicated” and “not ultimately enlightening,” he felt it was important to include it. “What I included was a fraction of what was there,” he explained. “So if people think there’s a lot, let me tell you, there is very little compared to what’s there. I feel like I showed tremendous restraint, even though people may not know that. And I think I was very fair with having seen all the facts.”

If you or someone you know is having suicidal thoughts, please call the National Suicide Prevention Lifeline at 1-800-273-TALK (8255) or text HOME to the Crisis Text Line at 741741.