Fashion flashback to the 2011 SAG Awards

On April 4, 2021, the Screen Actors Guild Awards returns for the 27th time to honor the best in film and television. In honor of a night where stars from both the big and small screens get to dress up and celebrate their achievements, Wonderwall.com is looking back to 2011 to see what the most accomplished actresses of the year wore on the red carpet, starting with J-Law… Then-newcomer Jennifer Lawrence went for a bold look back in 2011. The “Winter’s Bone” nominee opted for a shocking pink Oscar de la Renta gown with a bold black velvet bow along her waist and thick-strapped black heels. Keep reading to see which other well-dressed stars were in attendance at the SAG Awards — and what they wore — a decade ago…

The stars of Lea Michele’s then-show, “Glee,” might not have won at the SAG Awards back in 2011, but her outfit remains a total champion. Lea wore a shimmery, sparkly white gown by Oscar de la Renta featuring a skinny metallic belt and delivered an equally gorgeous beauty look with simple makeup and amped-up beachy waves.

RELATED: The greatest moments from “Glee”

The Marchesa gown that Kim Kardashian West wore to the 2011 SAG Awards looks so far removed from anything she’d wear now that it feels like a prom photo. Despite it not being Kim’s style these days, she did look stunning in the highly embellished plum frock at the time.

Natalie Portman was chic perfection in this strapless white Azzaro dress with an embellished neckline. It’s hard to tell, but the actress — who took home top honors for her work in “Black Swan” that year — was pregnant with her first child, son Aleph Portman-Millepied, at the time. The fabric draped over her baby bump beautifully.

Mila Kunis was in a league of her own with this printed Alexander McQueen chiffon bustier dress. The gown was much more adventurous than her fellow nominees’ frocks, and the risk paid off.

January Jones, who was then starring on “Mad Men,” walked the red carpet at the Shrine Auditorium in Los Angeles in a black Carolina Herrera gown in a mermaid-style cut covered in gold lace.

In January 2011, Tina Fey attended the SAG Awards in support of “30 Rock” (both she and the show’s cast were nominated for awards). Tina was one of many actresses who went with a bold red look, with the comedy star choosing a form-fitting lace dress by Oscar de la Renta.

Claire Danes took home a Screen Actors Guild Award for her performance in “Temple Grandin” in 2011 wearing an aquamarine Louis Vuitton dress with black flowers sewn all over. A black belt gave the feminine dress the perfect touch of modern.

“Modern Family” nominee Sofia Vergara showed off her feminine physique in this draped blue gown with a diminutive train.

When she won a SAG Award for her performance on “The Good Wife” in 2011, Julianna Margulies wore a gorgeous red strapless Yves Saint Laurent dress featuring knotted fabric at the chest that cascaded all the way down the gown.

Archie Panjabi attended the 2011 SAG Awards in support of her show, “The Good Wife,” which was nominated in the ensemble drama category. For her walk down the red carpet, Archie choose a strapless dress with a sweetheart neckline and a black lacy overlay.

Angie Harmon looked as ready for a couture wedding day as a red carpet event when she attended the Screen Actors Guild Awards on Jan. 30, 2011. The actress turned heads in a pale pink feathered Monique Lhuillier strapless design.

Mindy Kaling, who nominated for her work on the comedy show “The Office” in 2011, stunned on the red carpet in a shimmery Grecian-style draped Tadashi Shoji gown with a metallic belt.

Nominee Nicole Kidman went for a dark, somewhat morbid (but still chic) look with this Nina Ricci gown with a lace neckline and back.

A then-14-year-old Hailee Steinfeld was perfectly chic but age appropriate in a bright pink, black and tangerine striped Prada dress with a flounced hem. Fitting for her young age, the “True Grit” nominee kept her makeup and accessories super simple and fresh.

Eva Longoria was daring in this Georges Hobeika gown with a plunging neckline and open sides back in 2011. She upped the drama of the look with a low bun and side-swept hair.

“Nurse Jackie” nominee Edie Falco looked sophisticated in this Carolina Herrera dress with her hair pulled back and diamonds on her ears, wrist and hands. The bold color of her gown was the color of the evening, with so many actresses favoring red hues.

The second most popular color on the 2011 SAG Awards red carpet was white, and Amy Adams pulled it off flawlessly. The nominee for her work in “The Fighter” choose a form-fitting Hervé Leroux halter dress that accentuated her curves.

Hilary Swank, who attended the award show as a nominee for her performance in “Conviction,” dazzled in this one-shouldered neutral chiffon Versace gown with crystal detailing along the bodice that perfectly matched her gold clutch.

Robin Wright picked a safer option for this awards show appearance, opting for a slinky black gown with embellished straps and a lacy overlay. But the look was far from basic black, with a sexy slit showing off her strappy heels and legs.

“Glee” star Jane Lynch’s Ali Rahimi dress gave off a touch of cupcake vibes with its dramatic layered skirt, but the color did look beautiful on the blonde nominee.

“Hot in Cleveland” star Valerie Bertinelli leaned into the super-popular red trend at the 2011 SAG Awards. She upped the ante on her strapless blood red gown with teased hair that felt fun and playful.

Rhea Durham supported husband Mark Wahlberg at the 2011 SAG Awards in a high-low black strapless gown. While the look played it safe, she did a great job making the look unique with her messy, pulled-back hair and chic teardrop earrings. 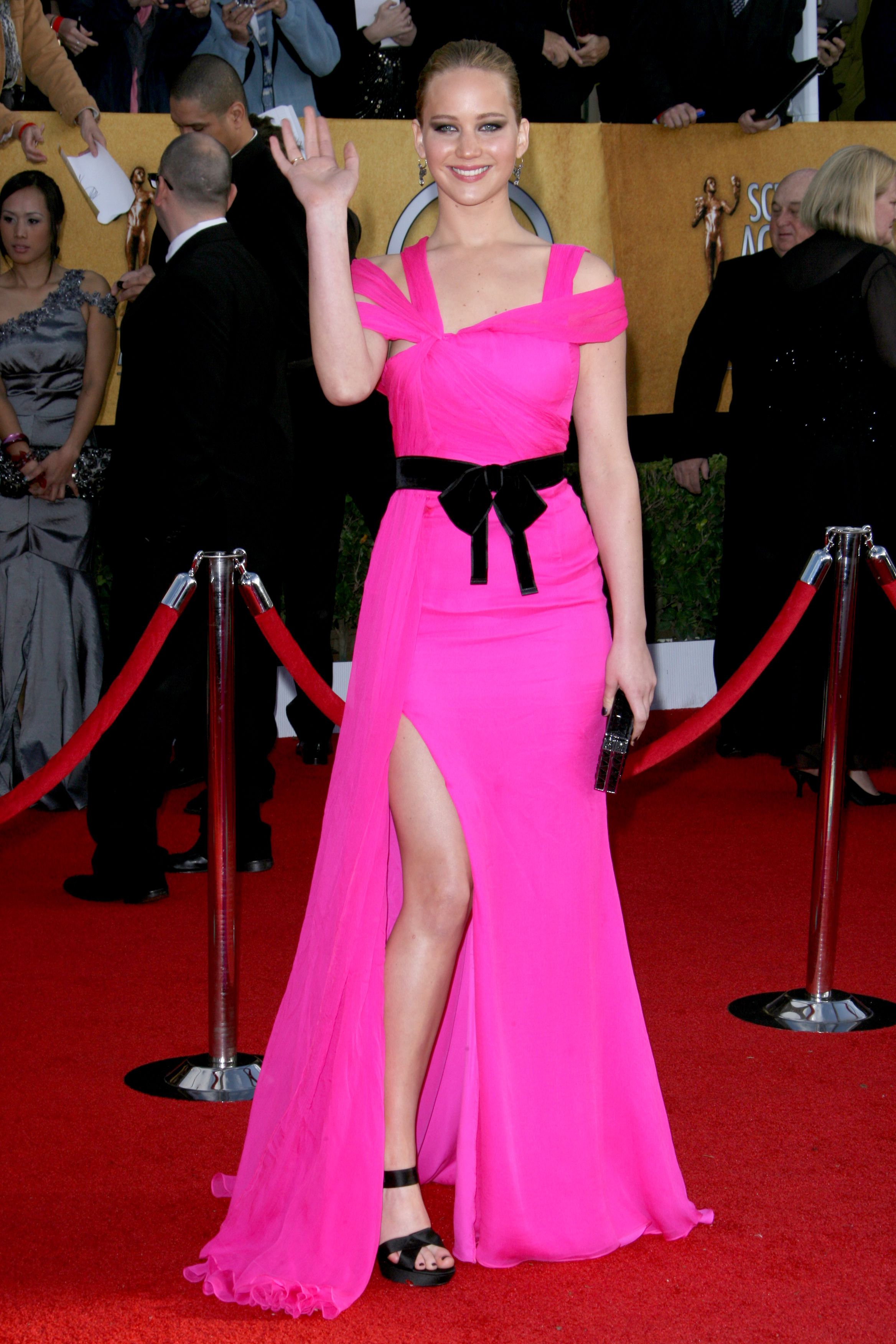 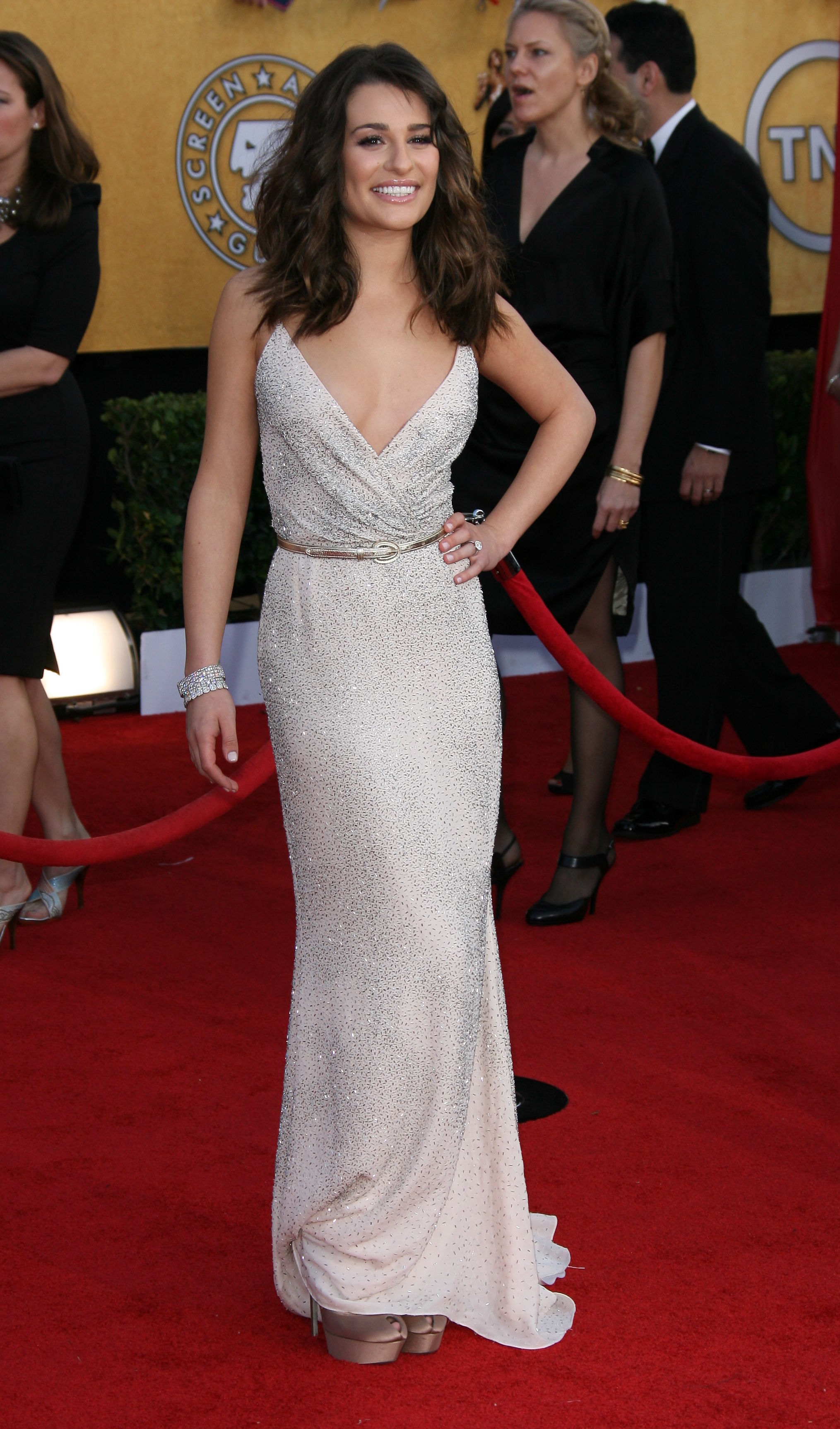 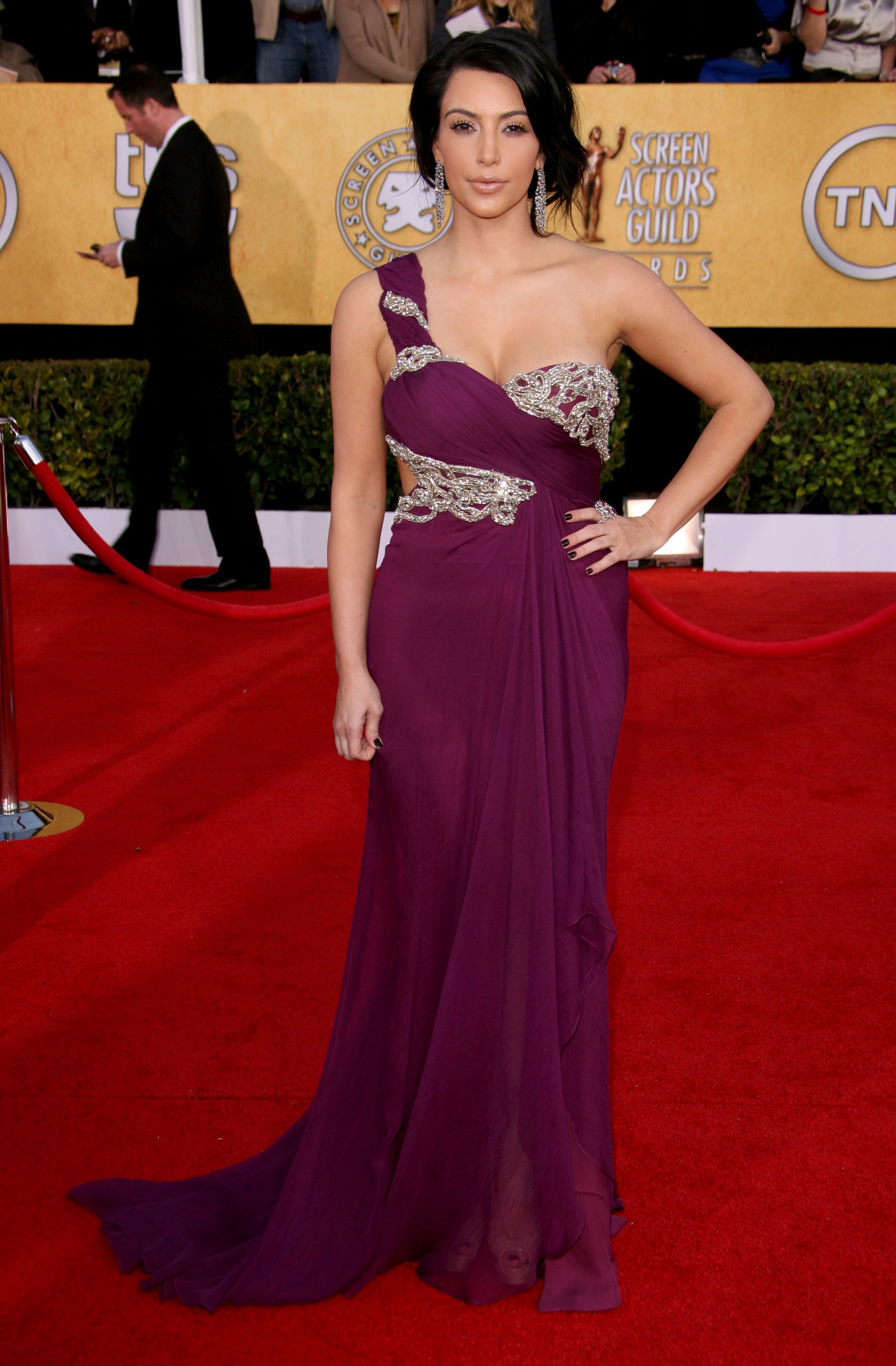 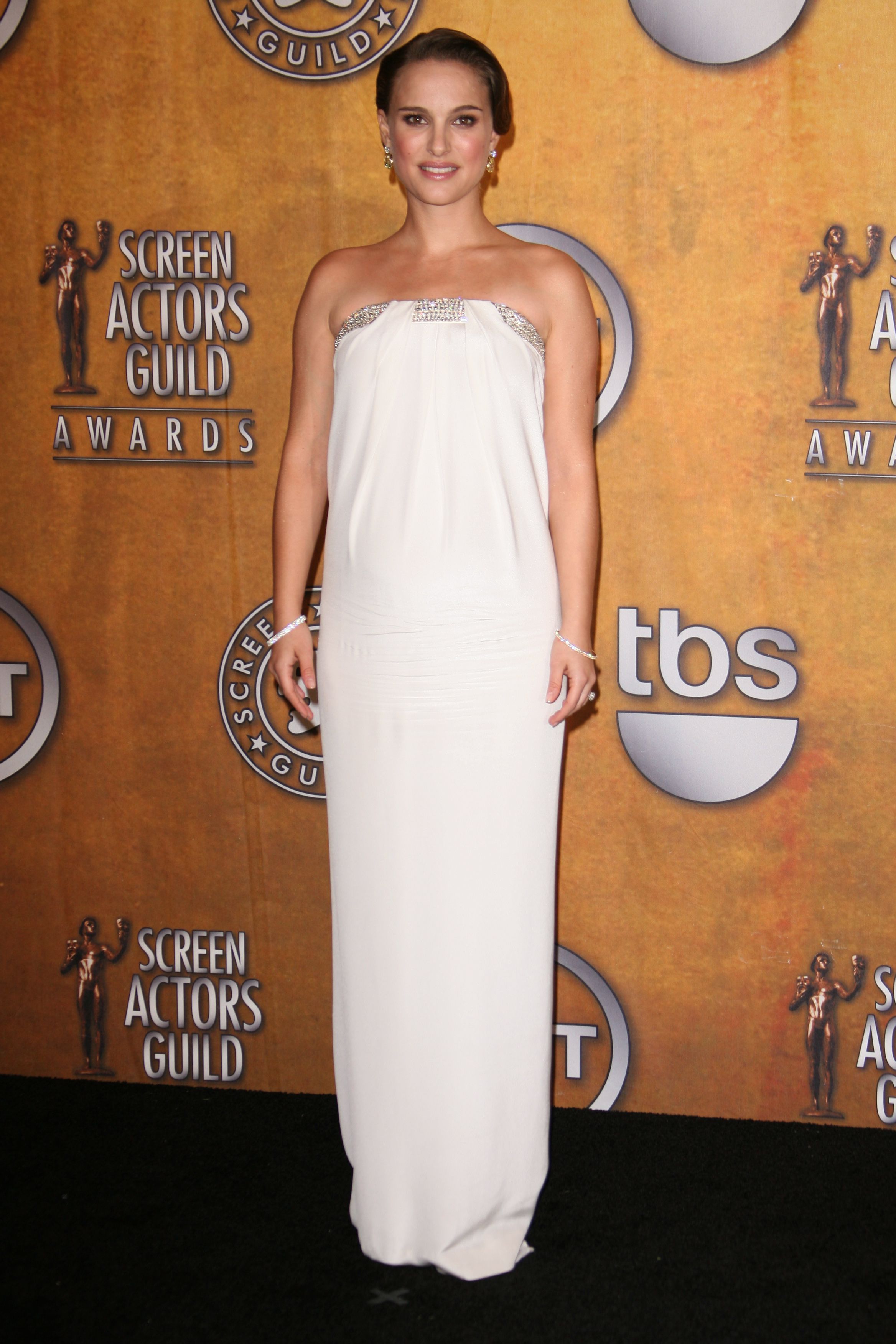 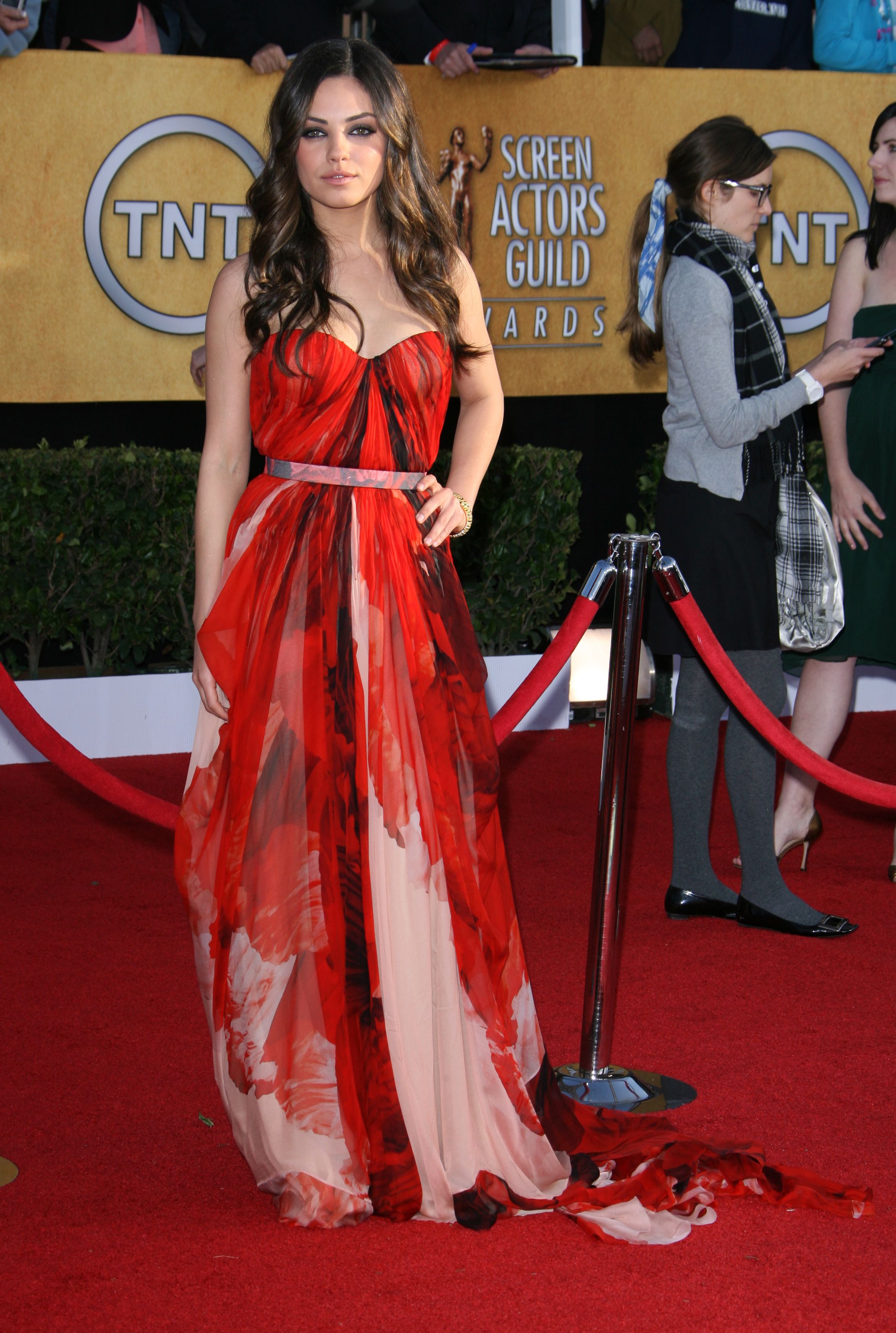 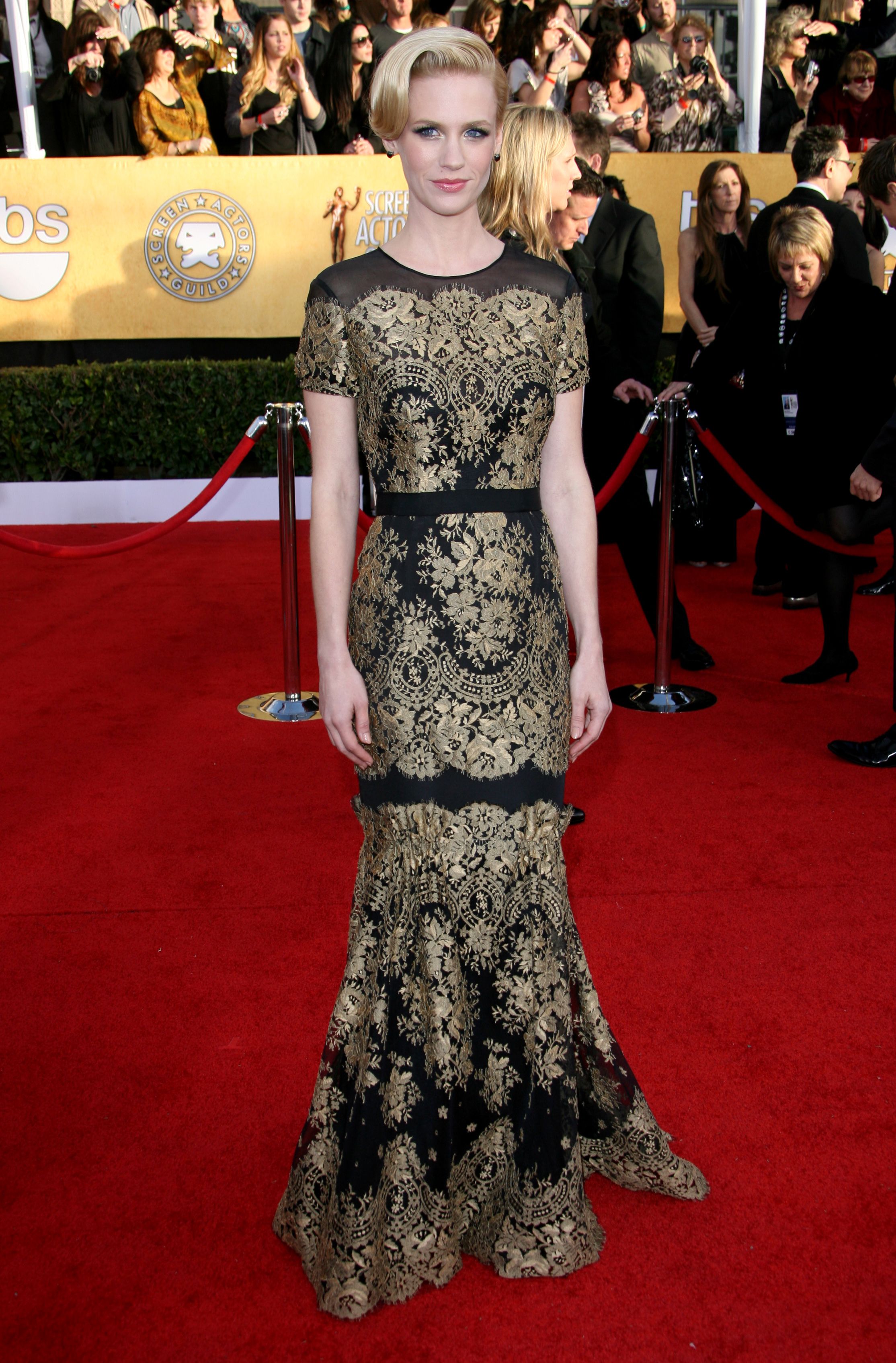 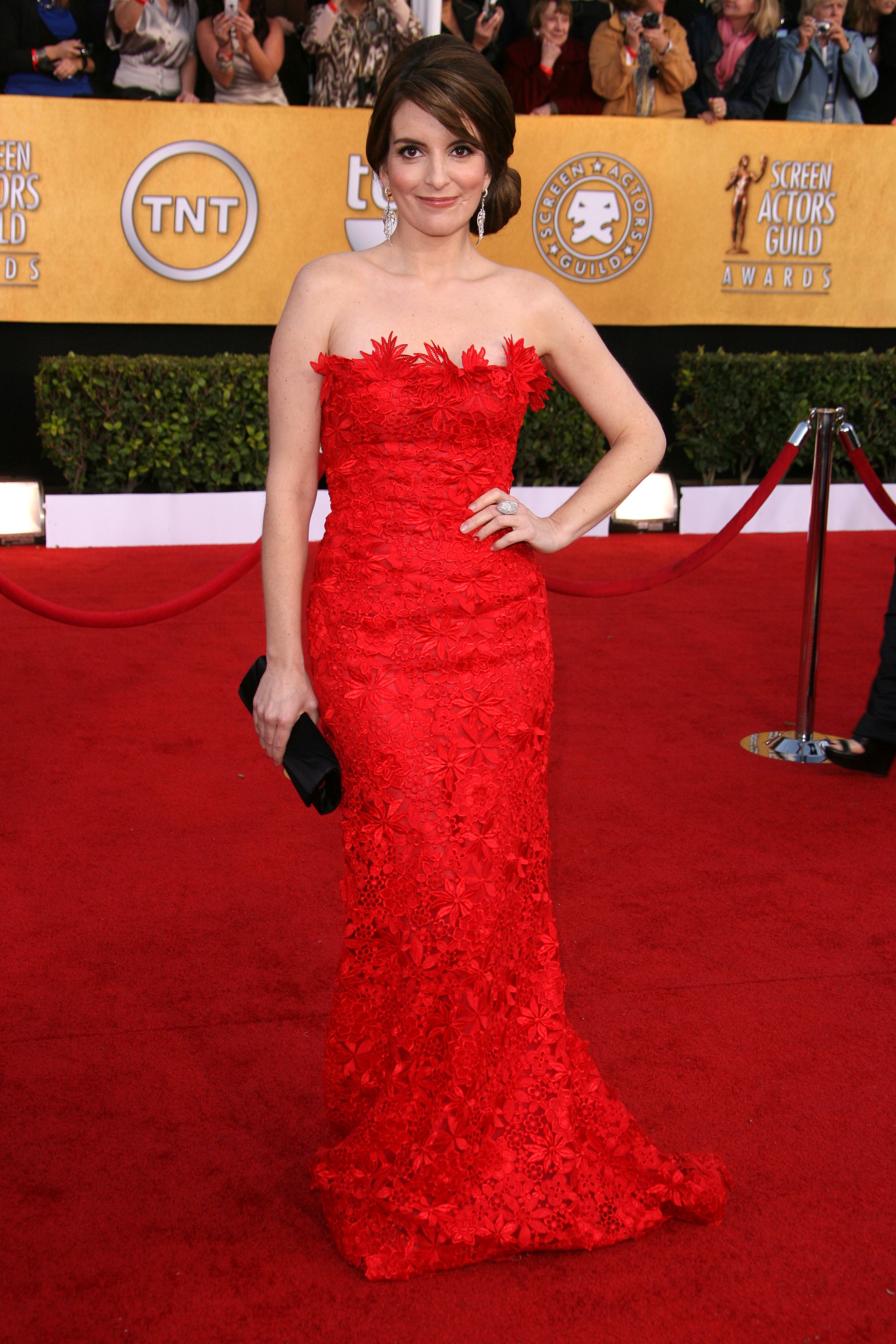 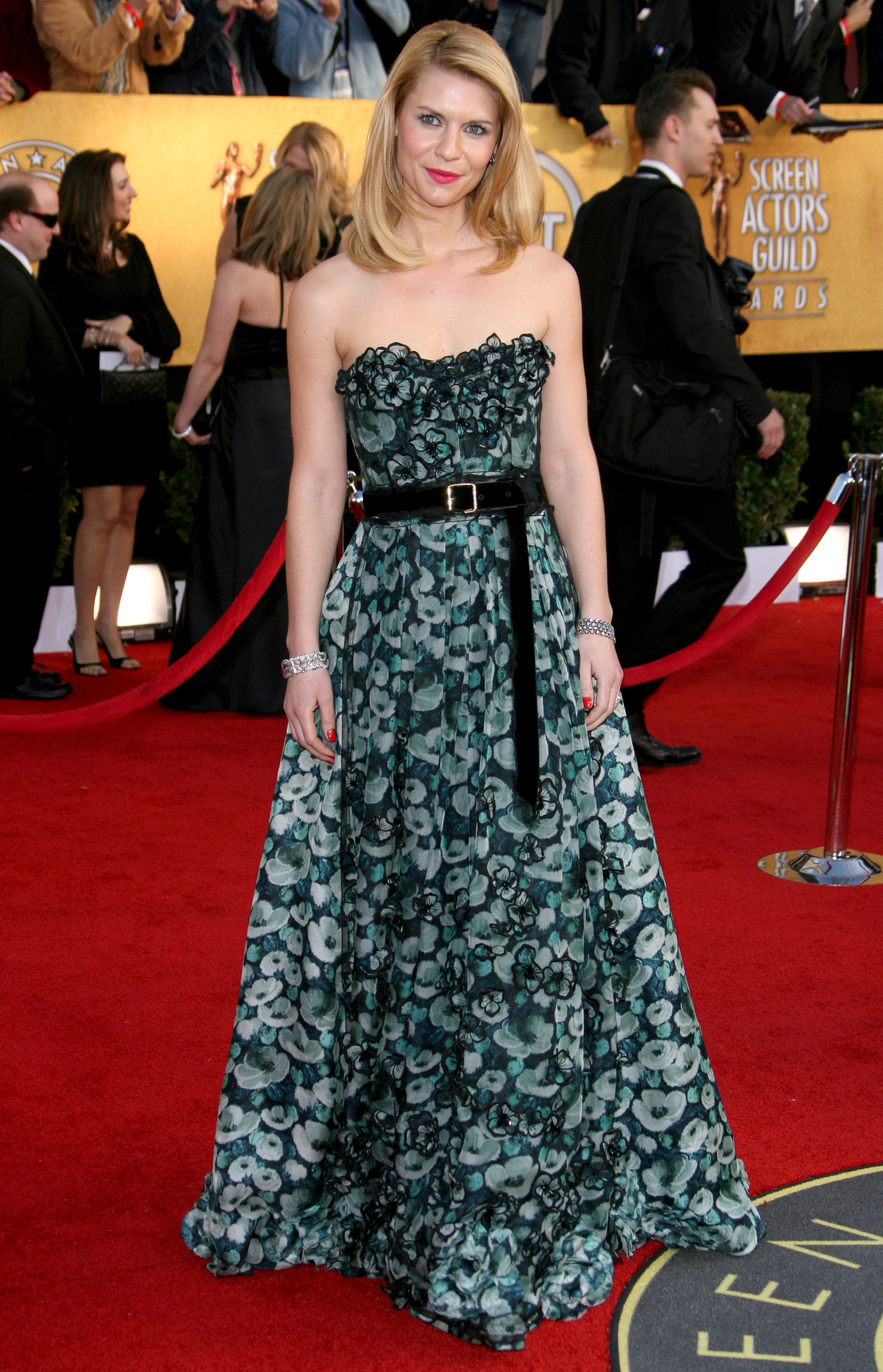 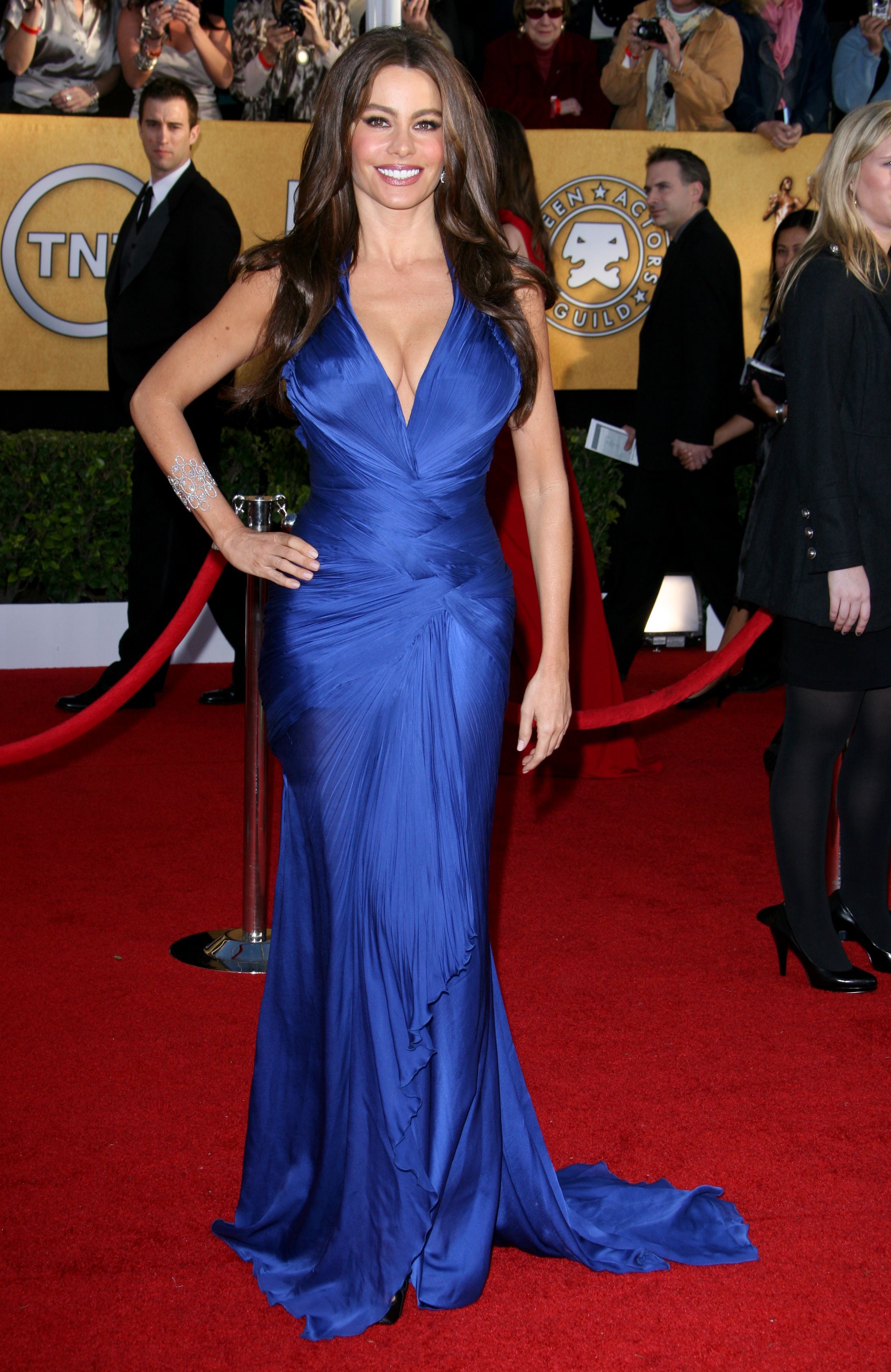 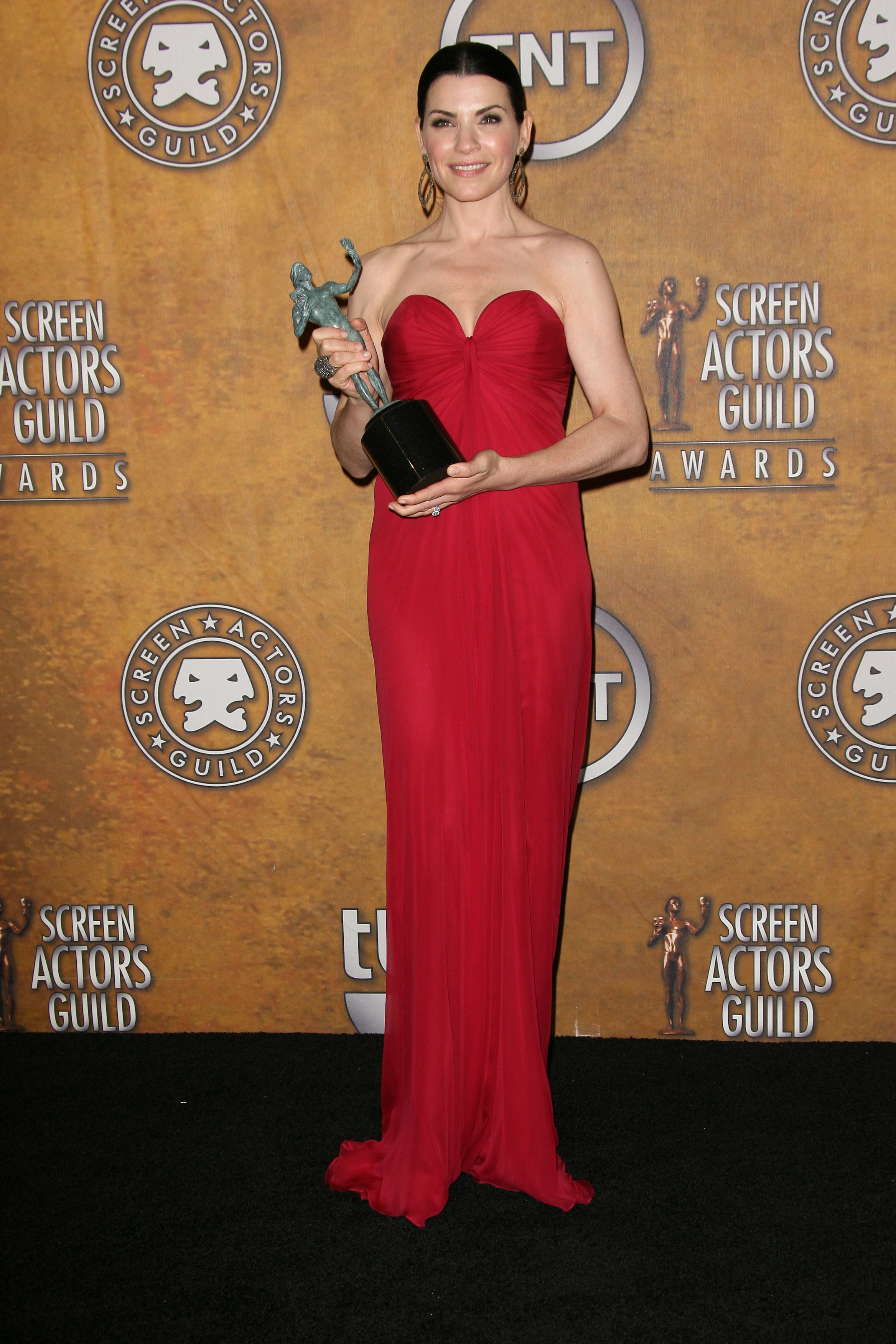 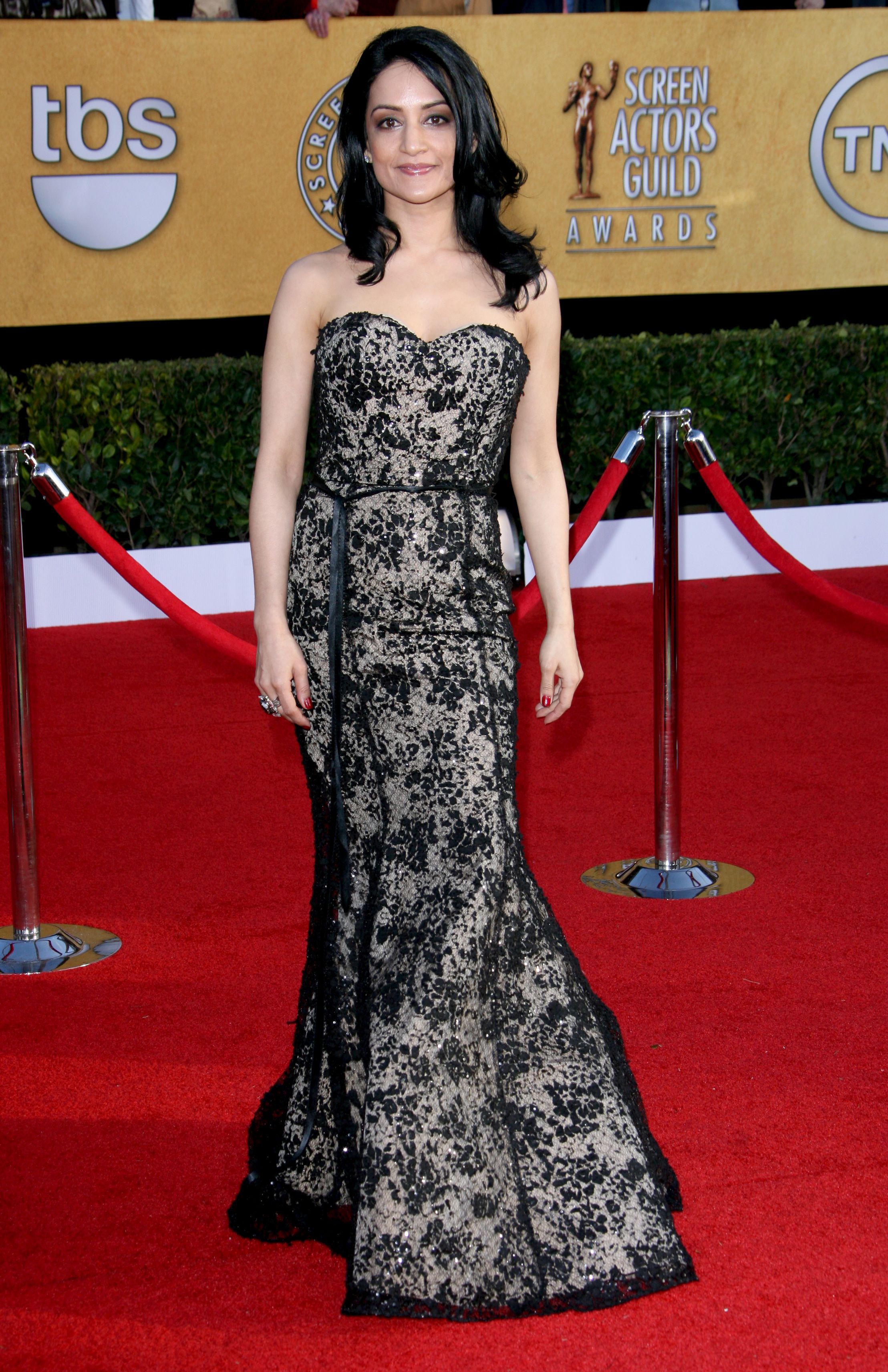 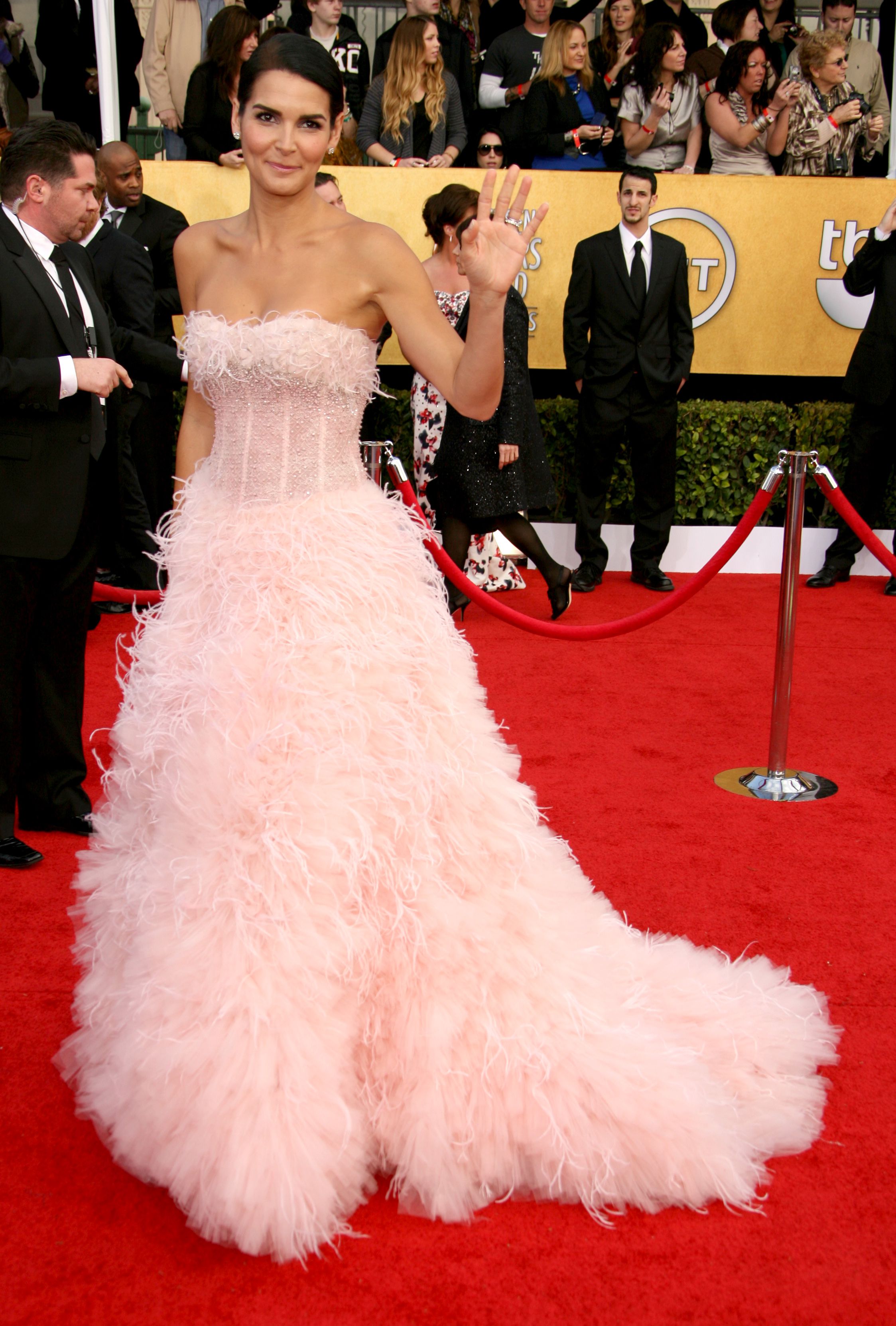 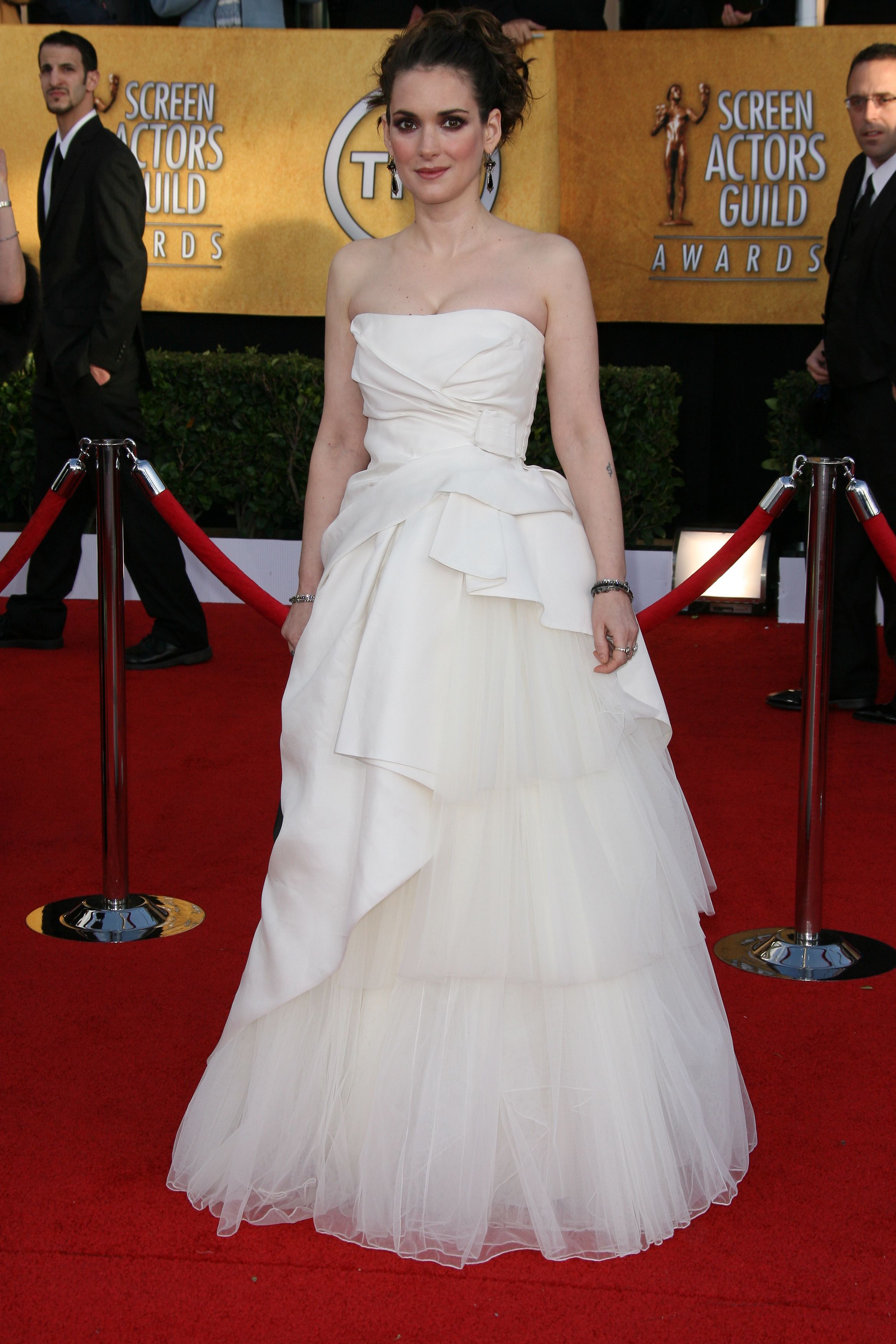 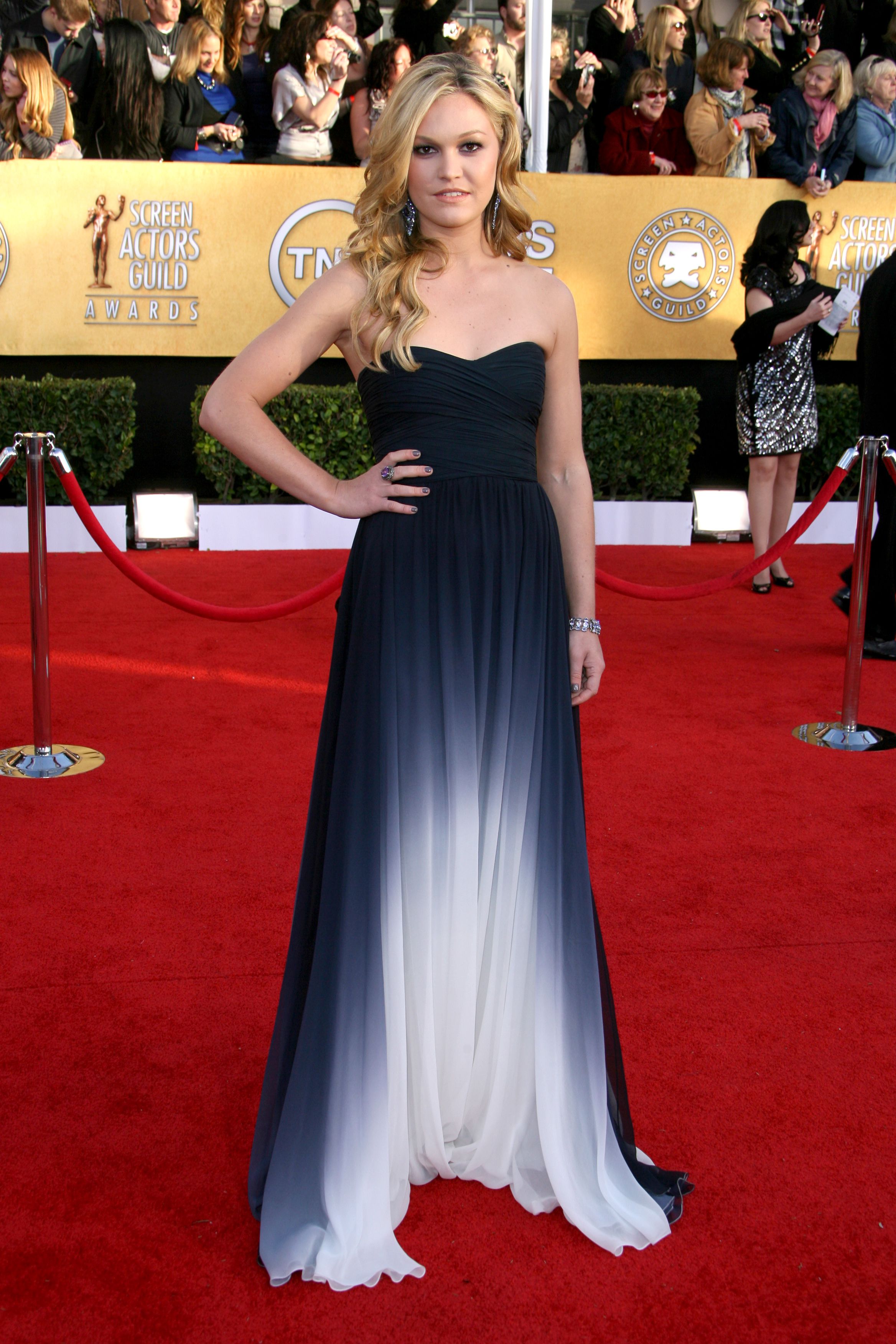 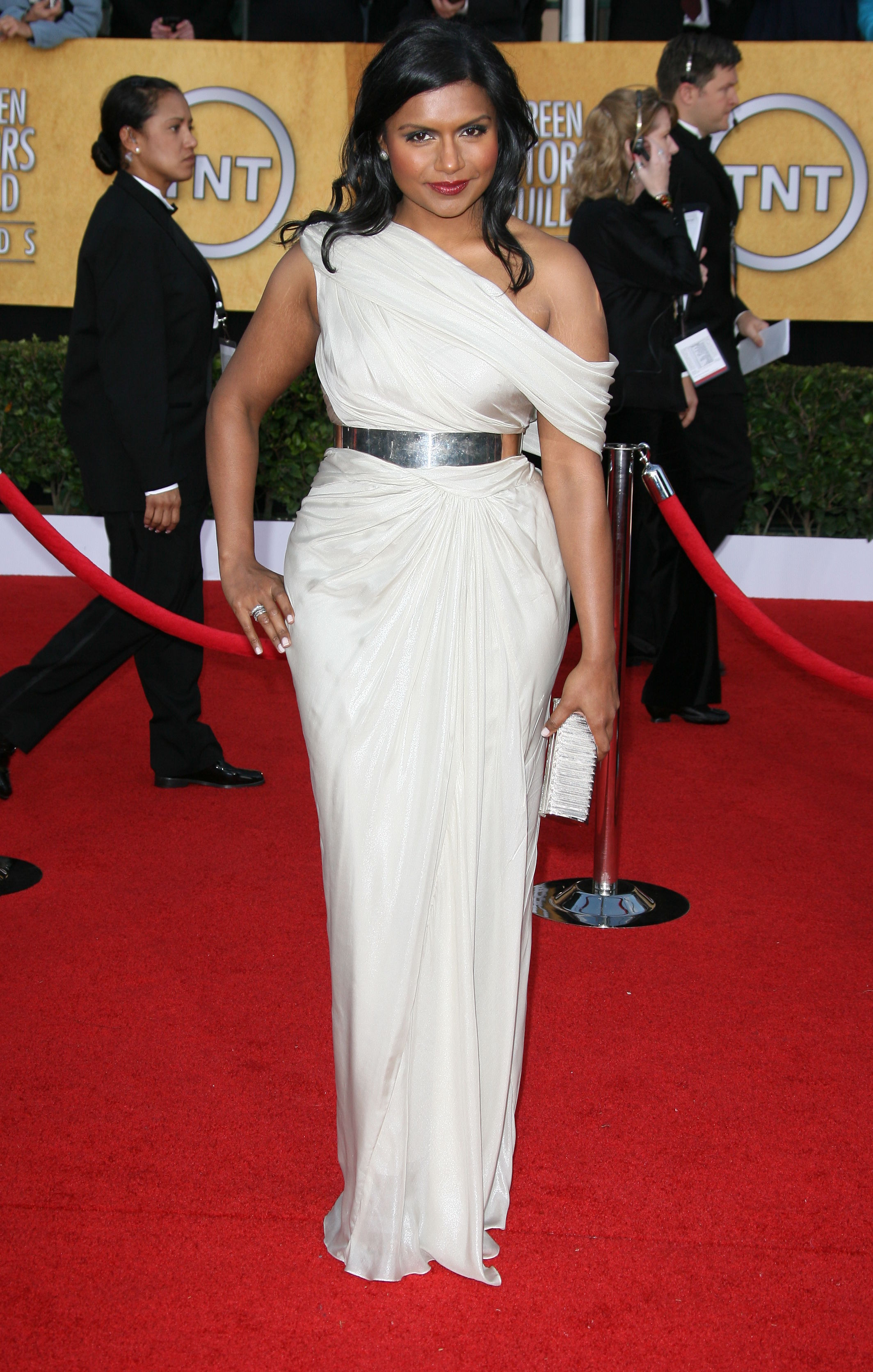 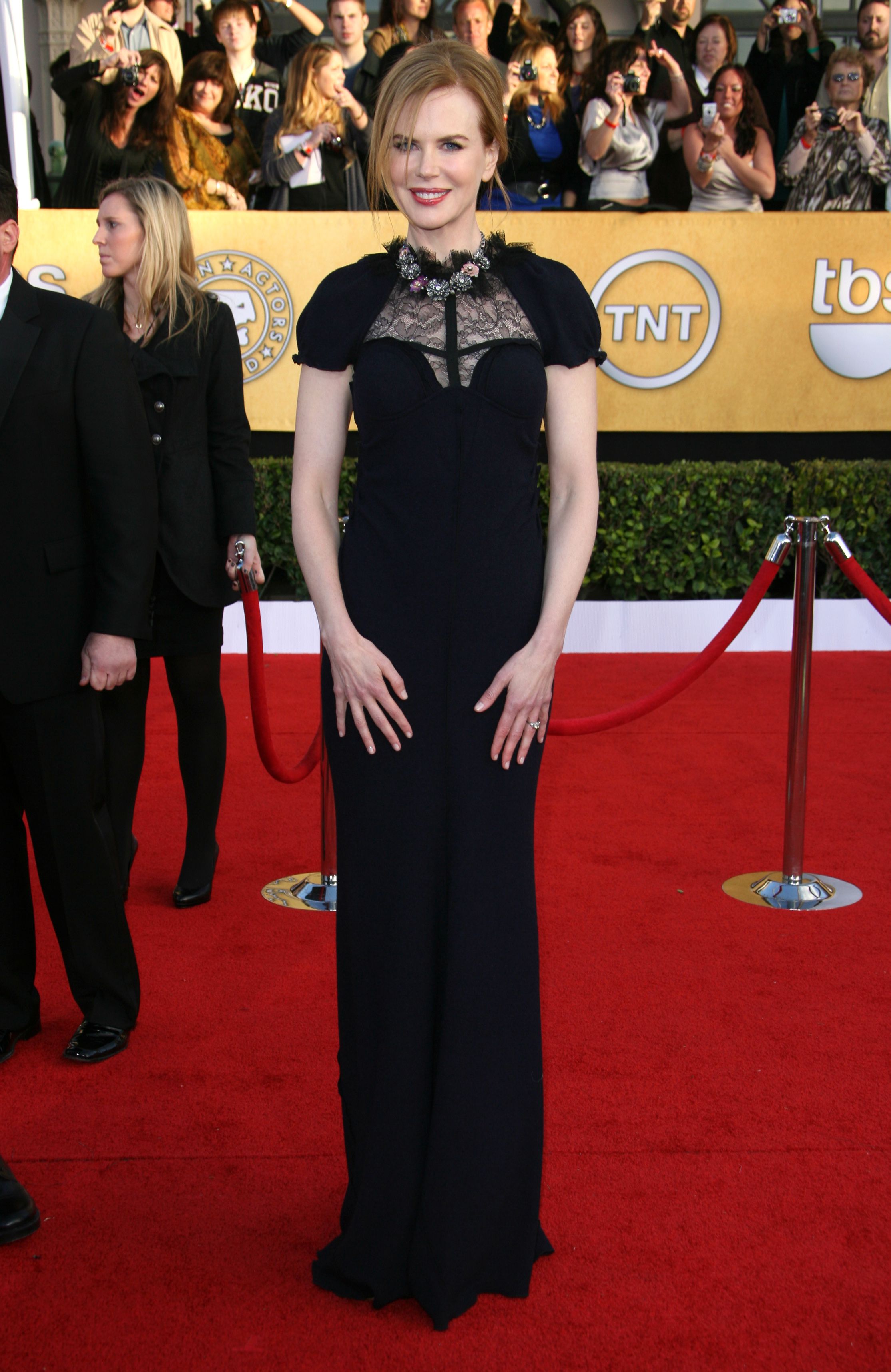 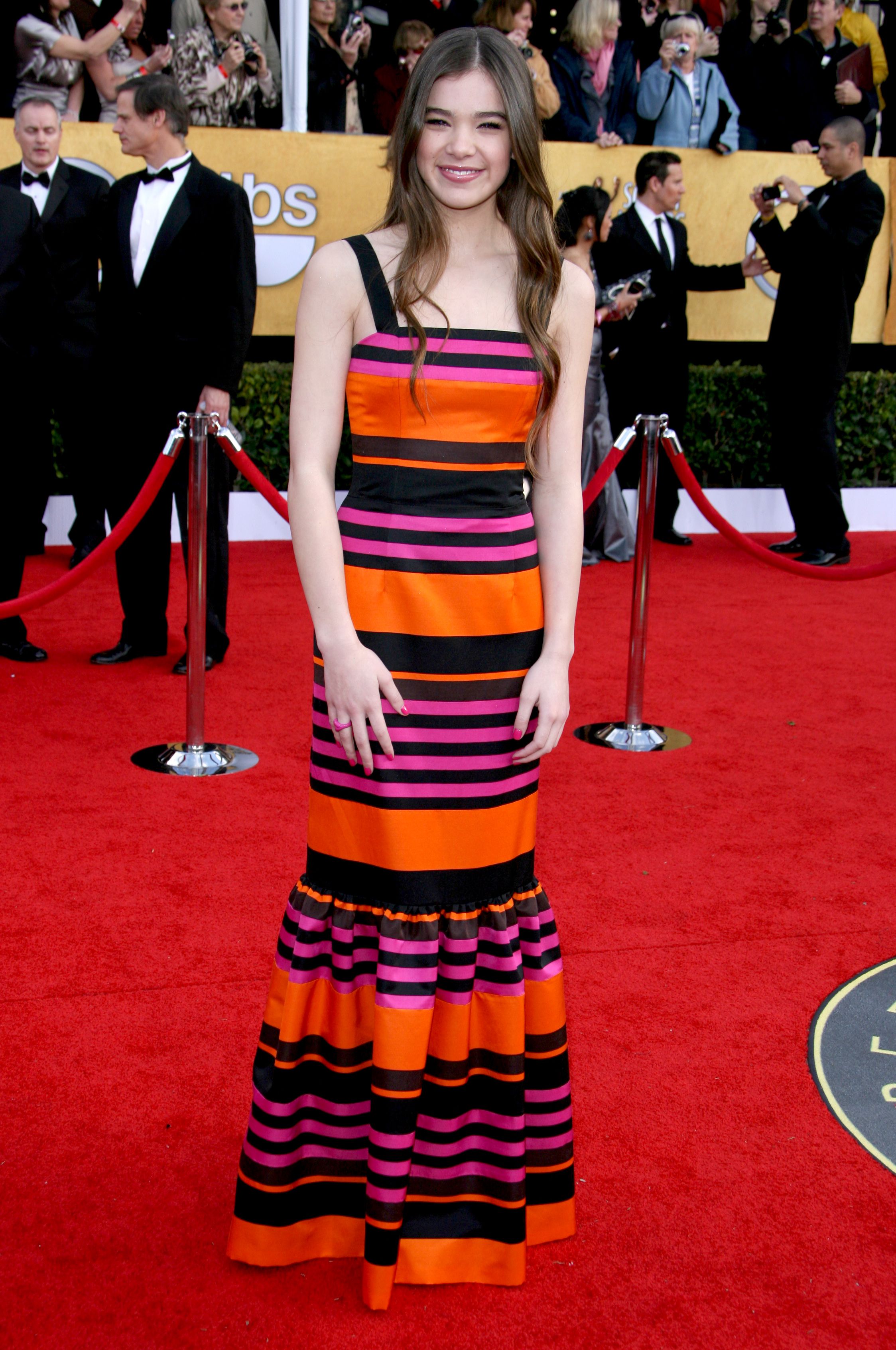 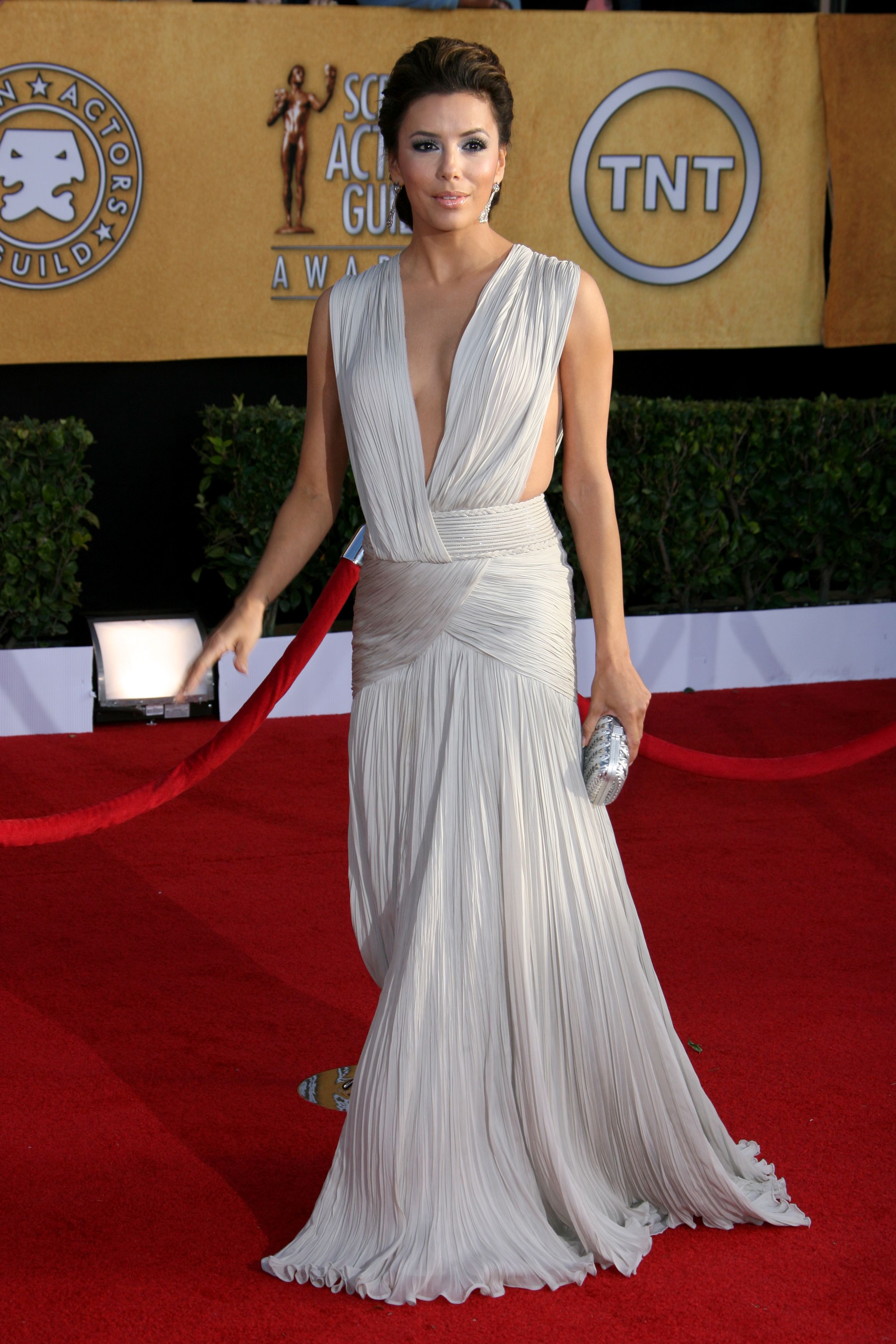 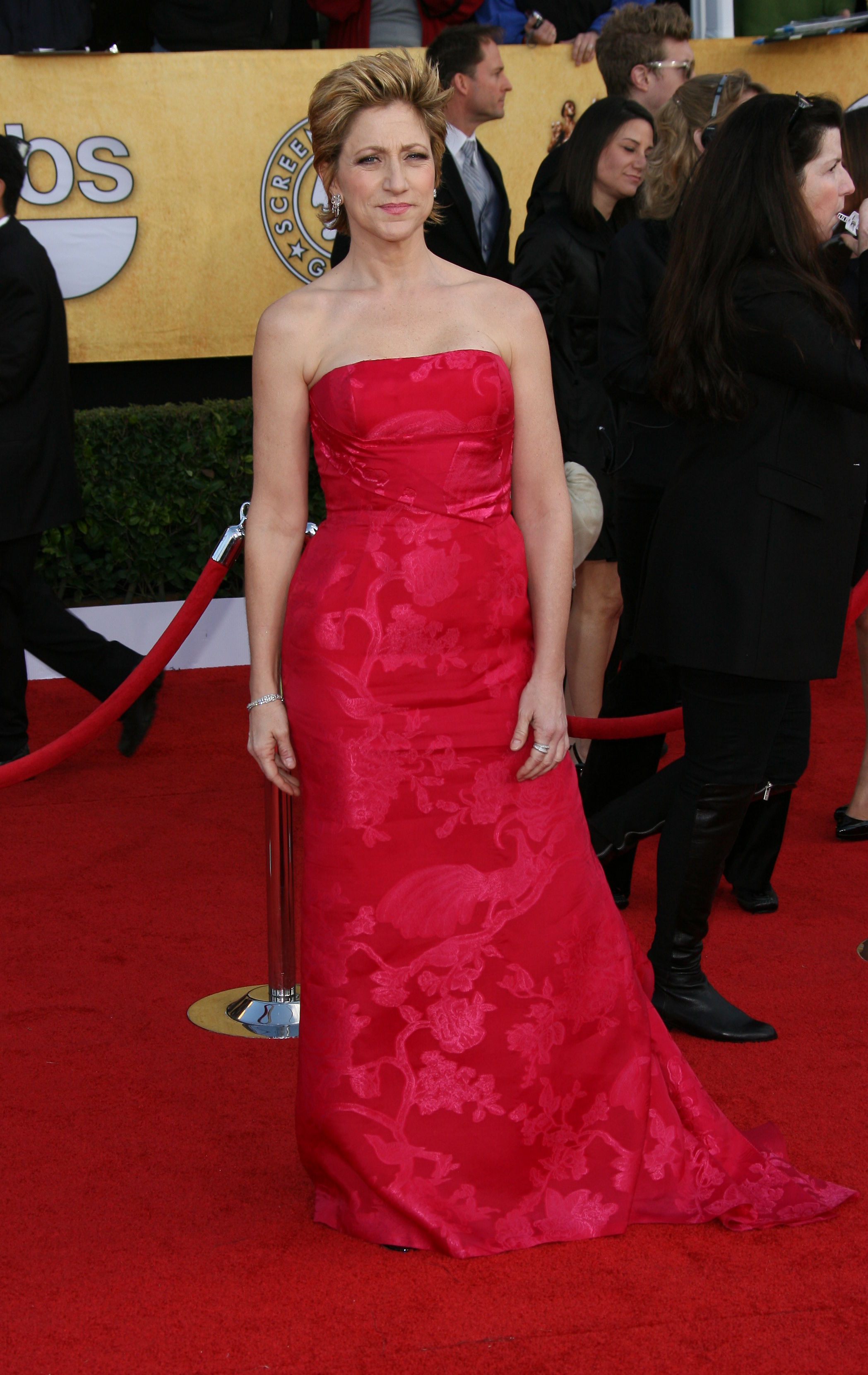 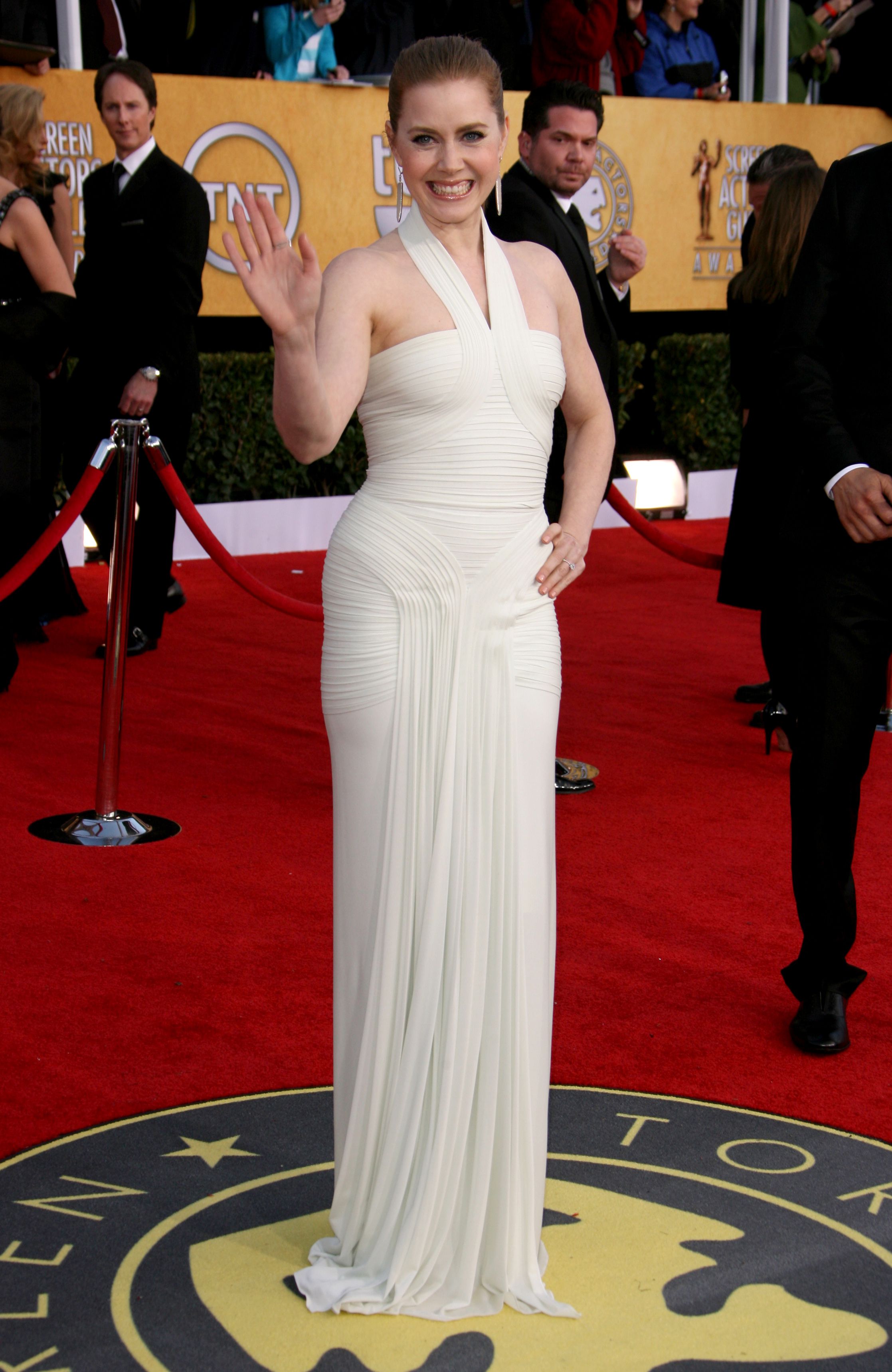 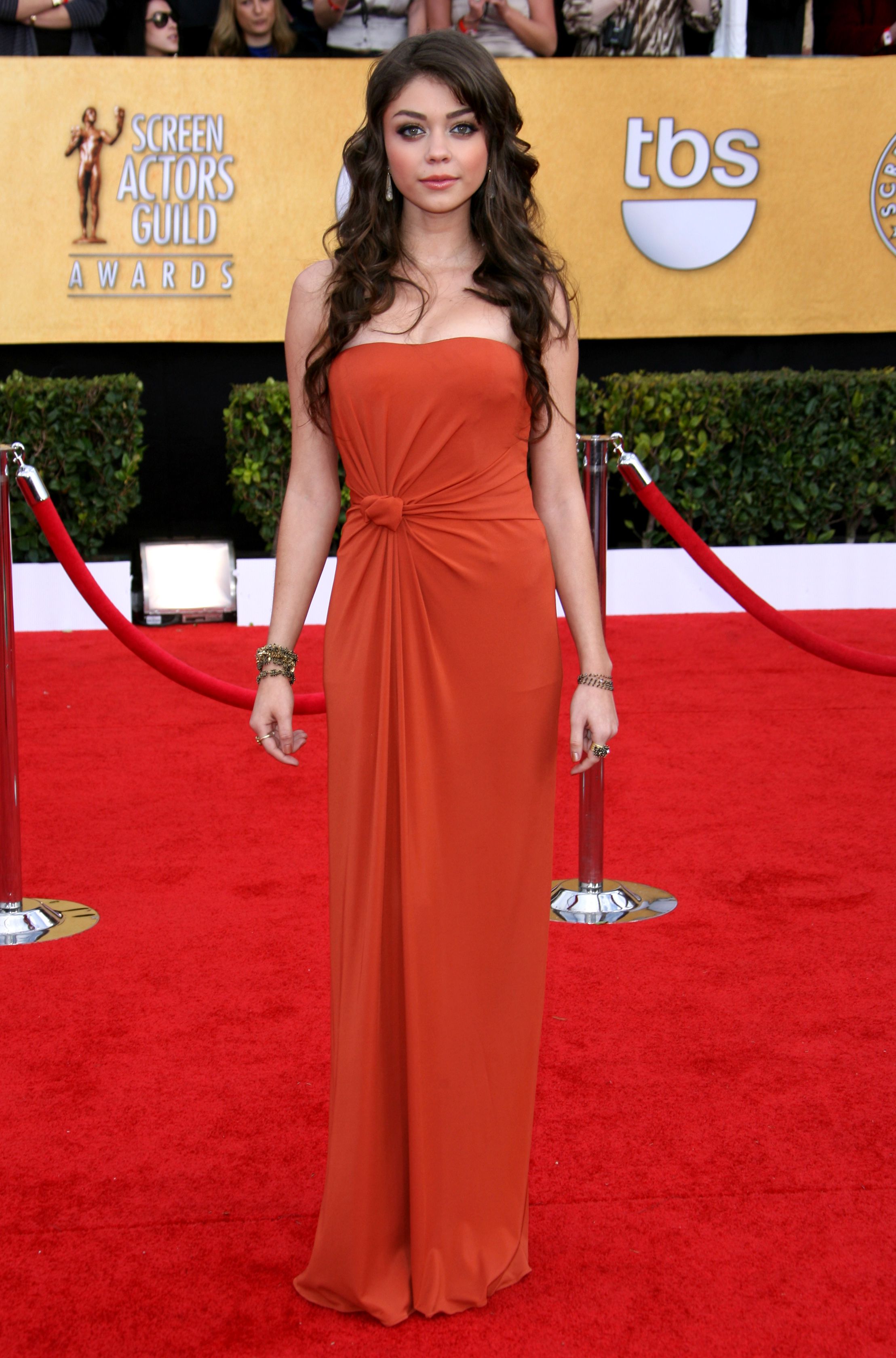 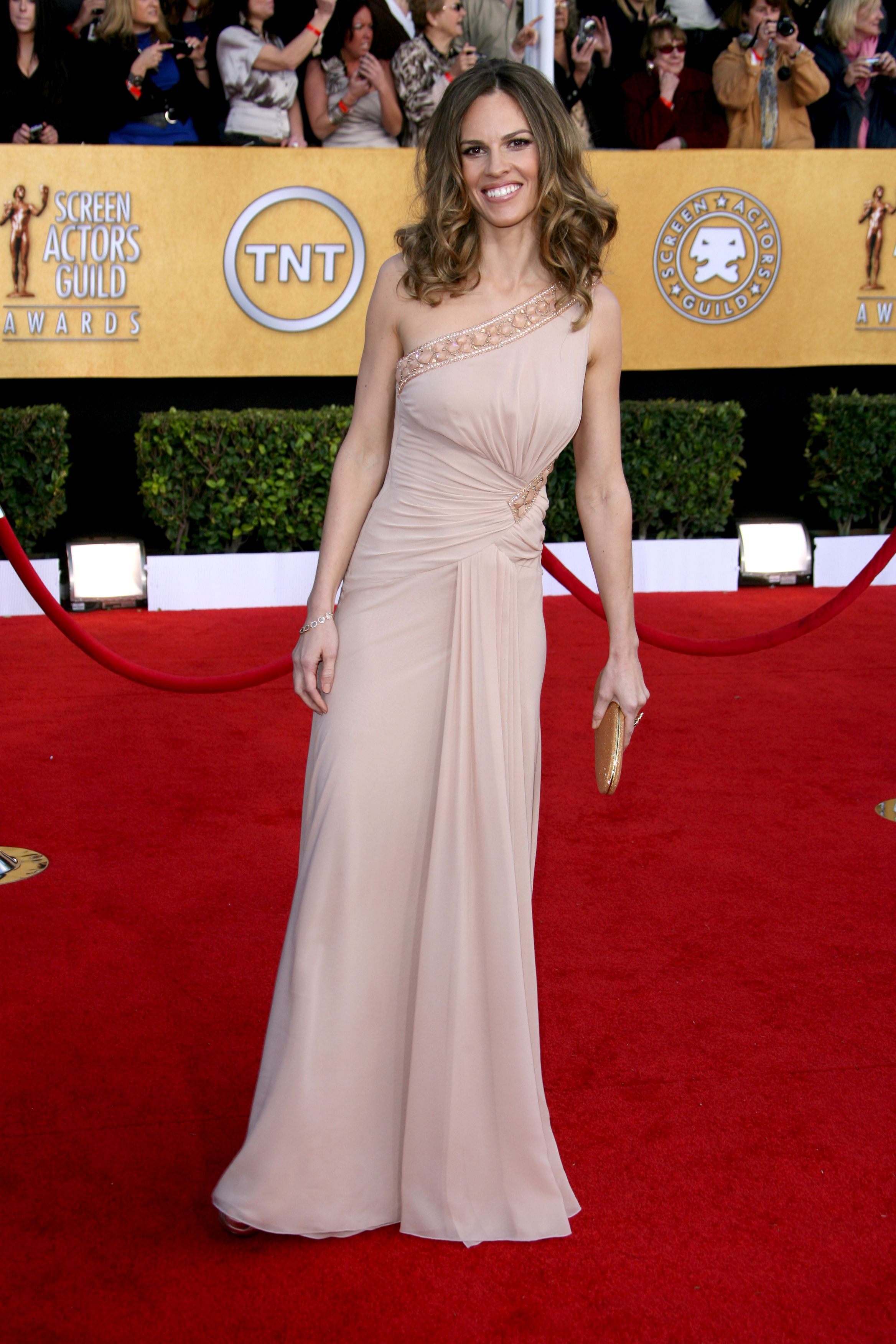 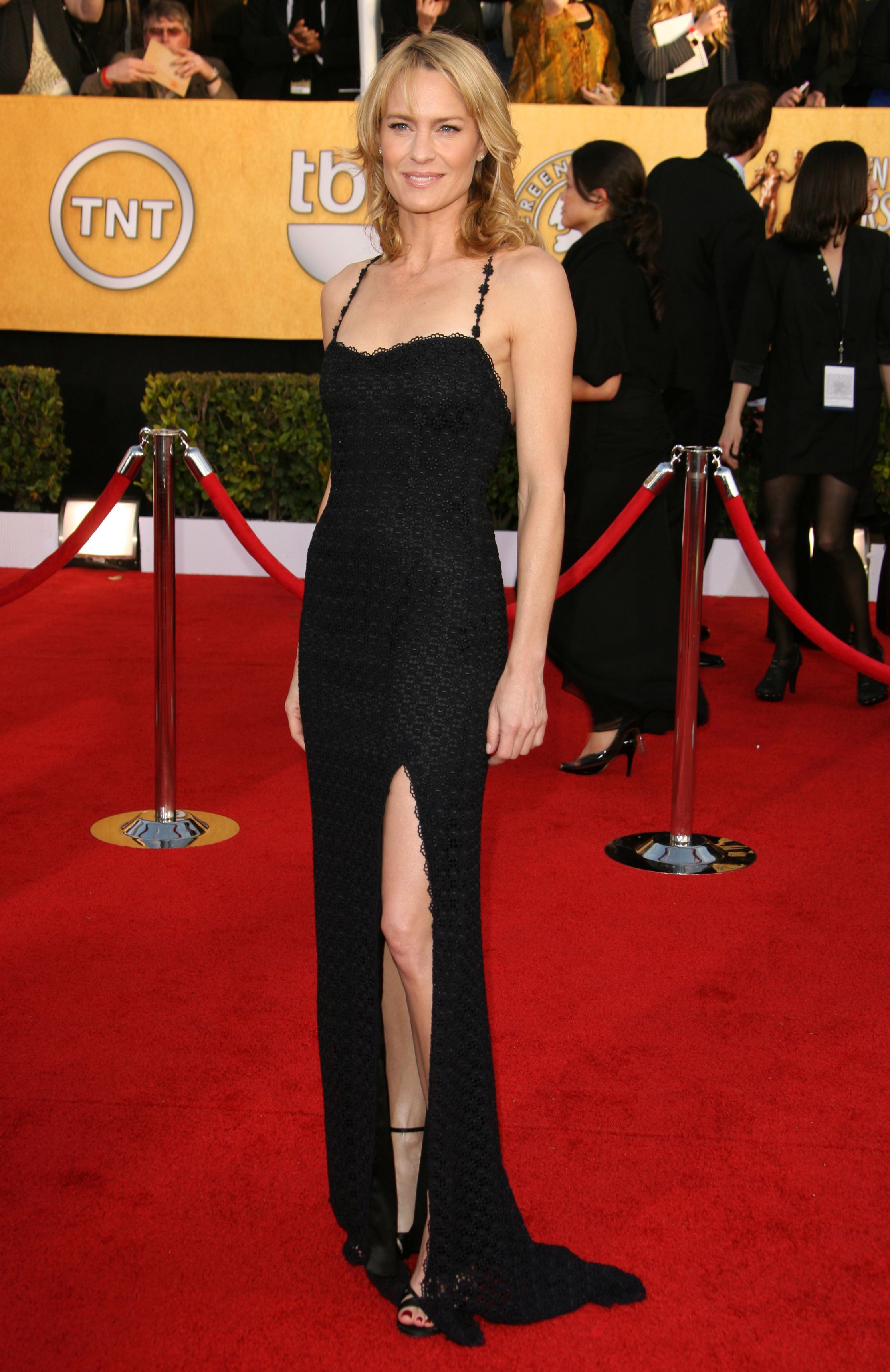 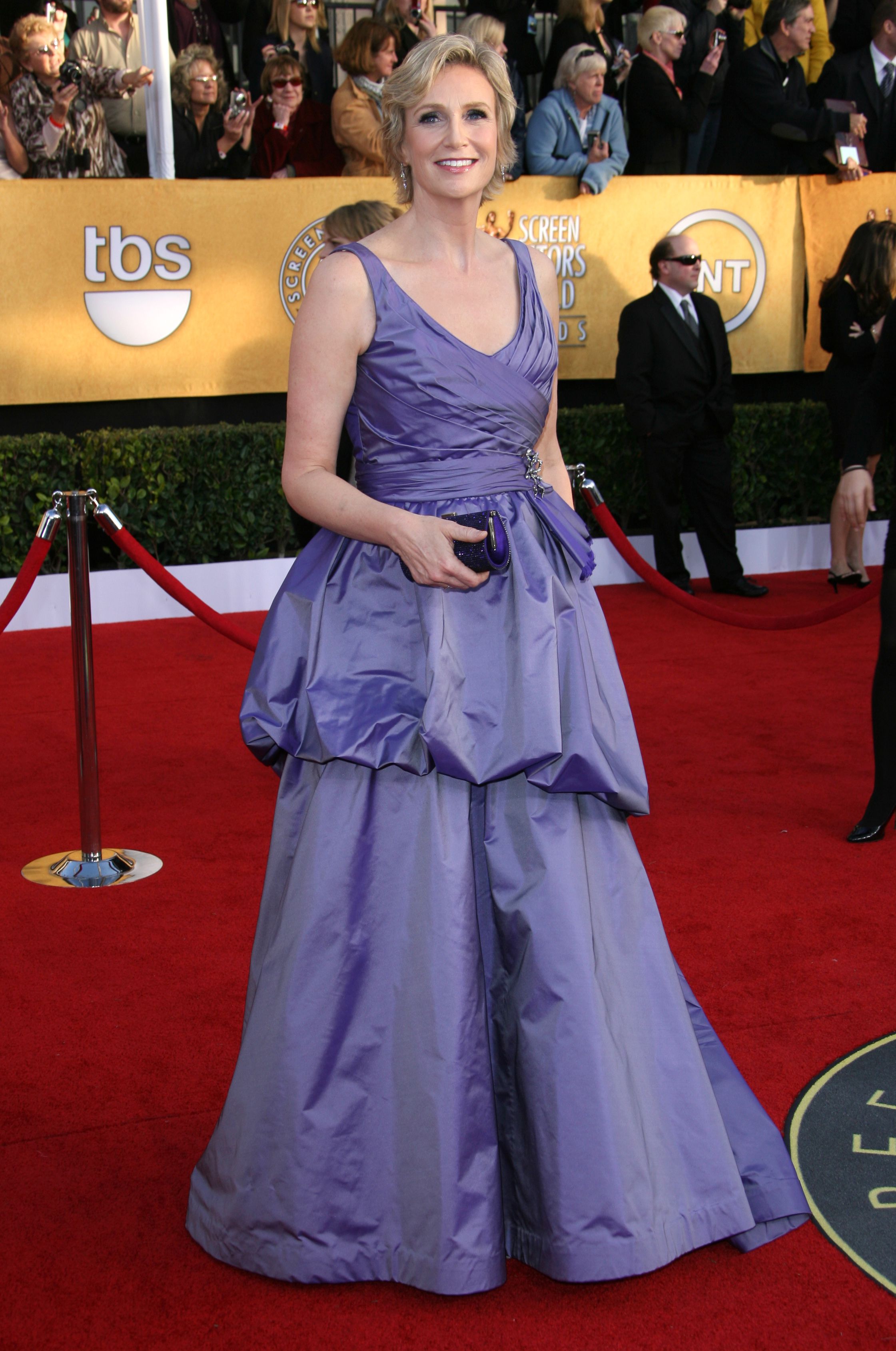 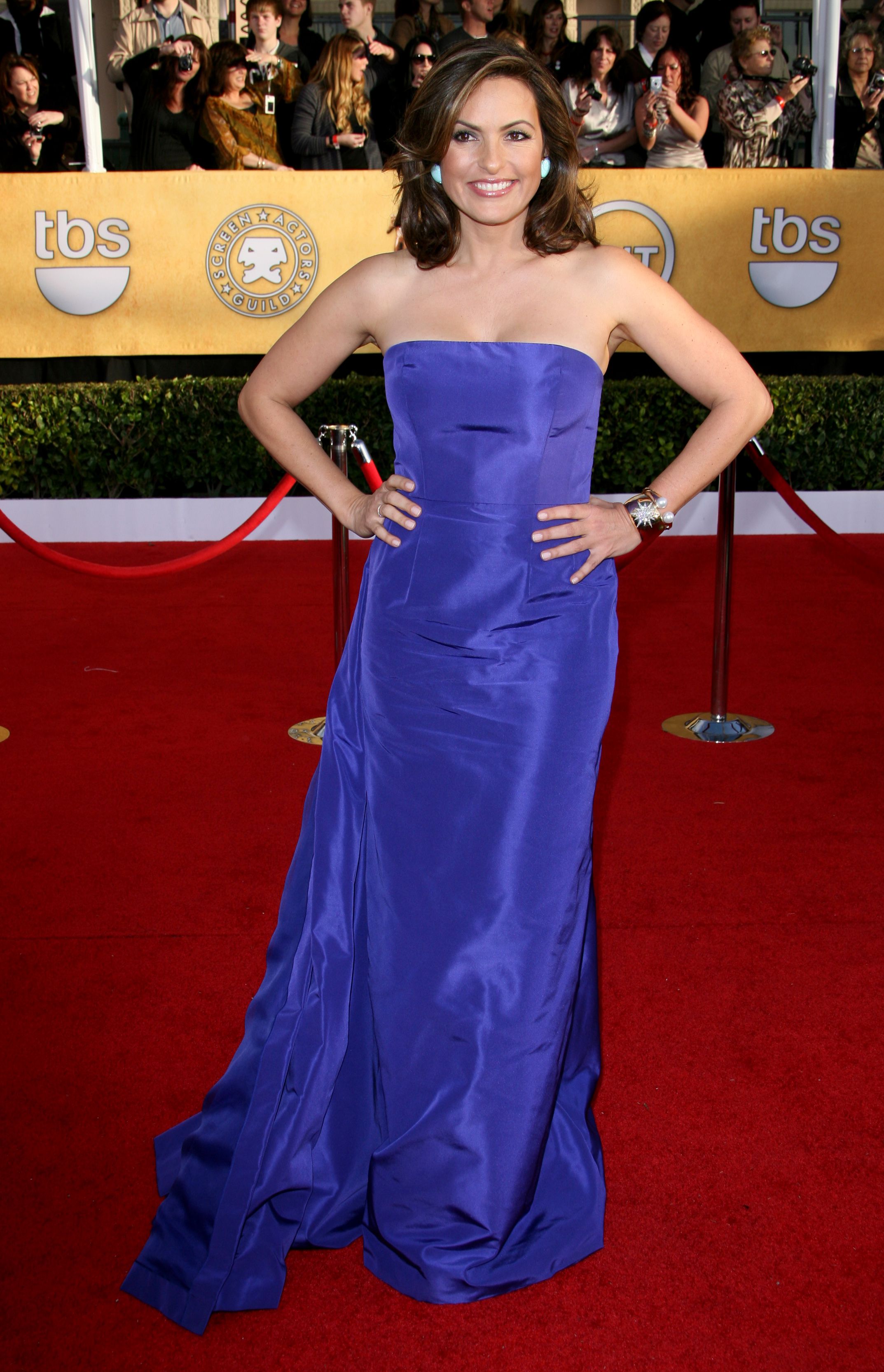 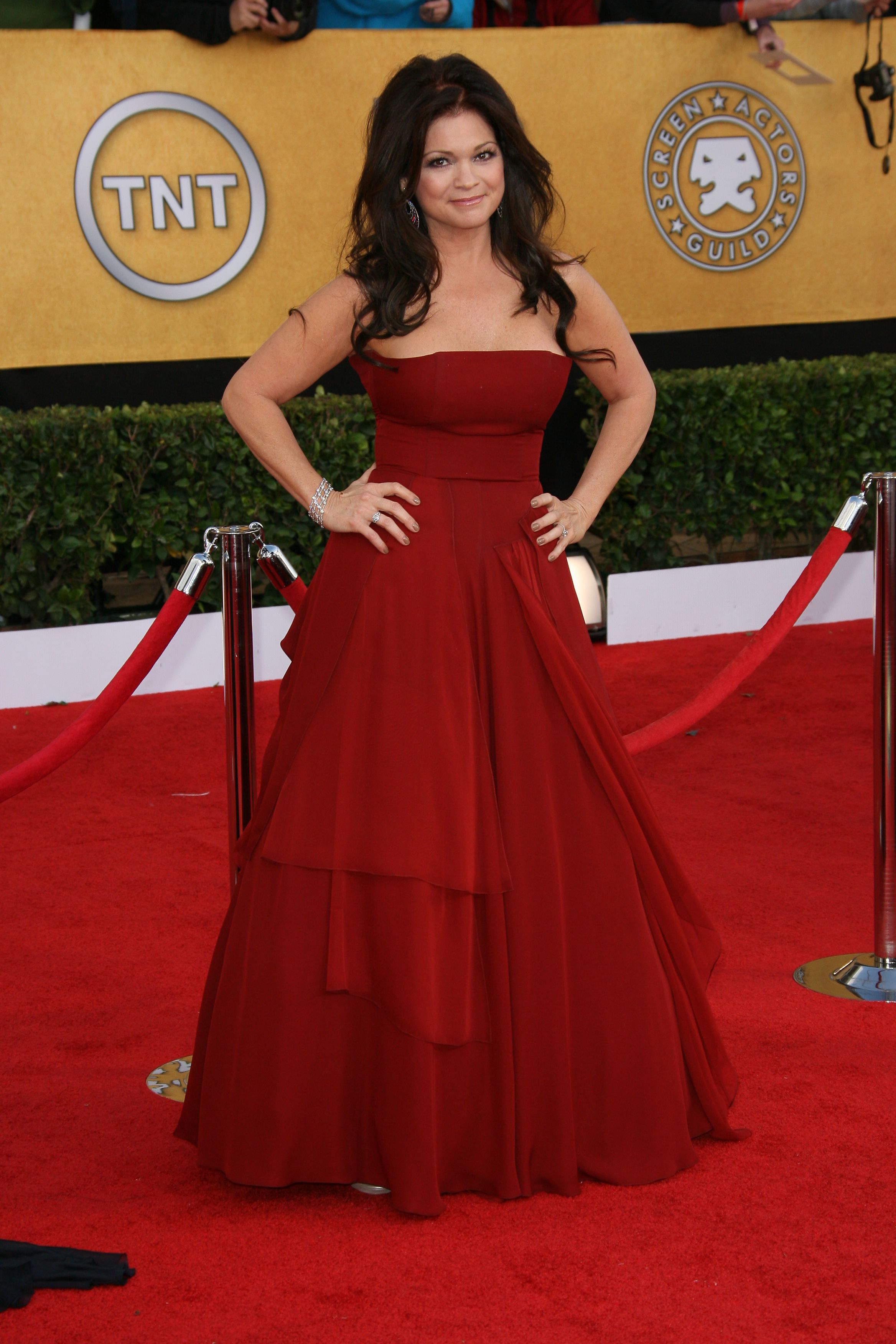 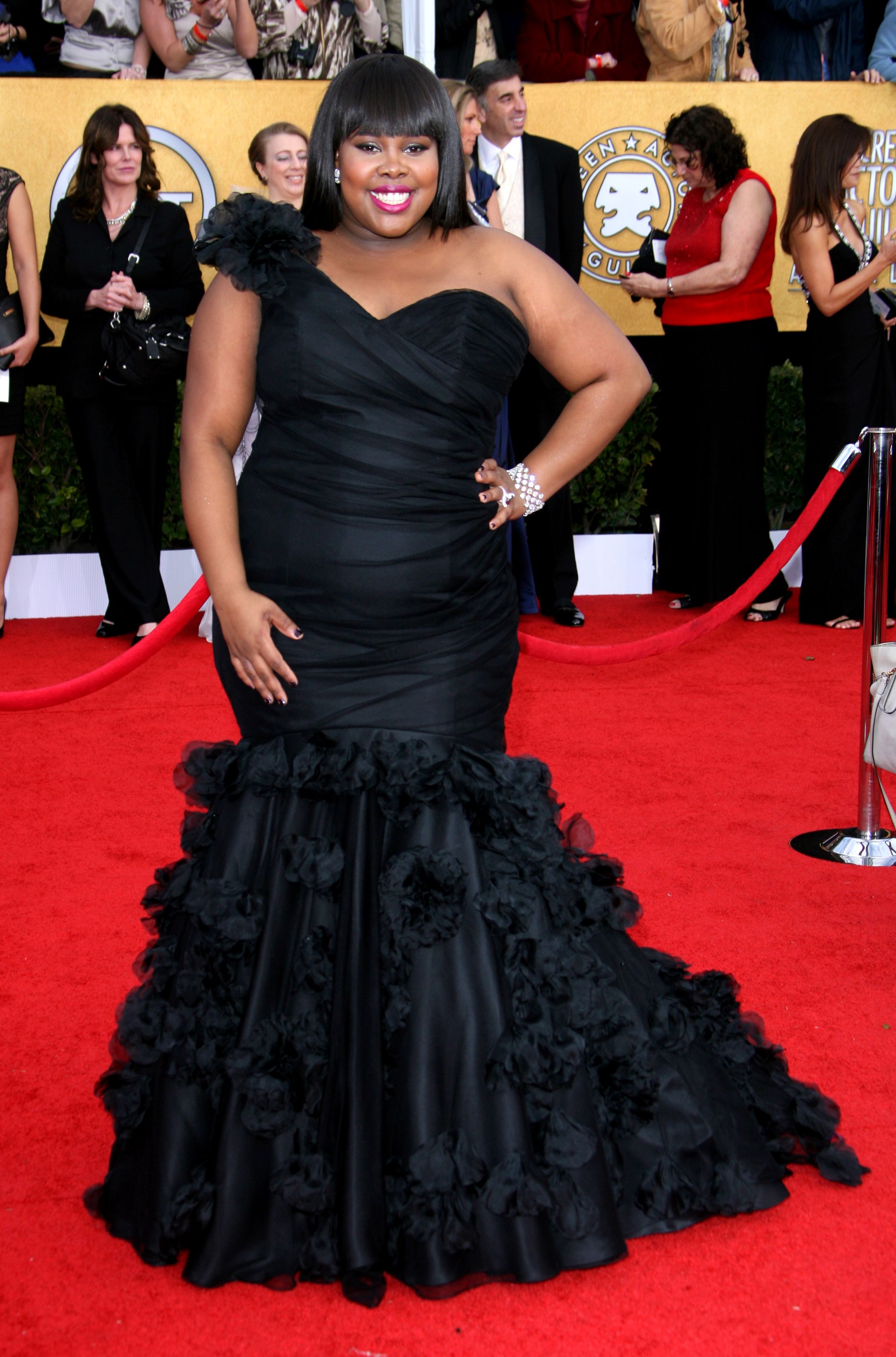 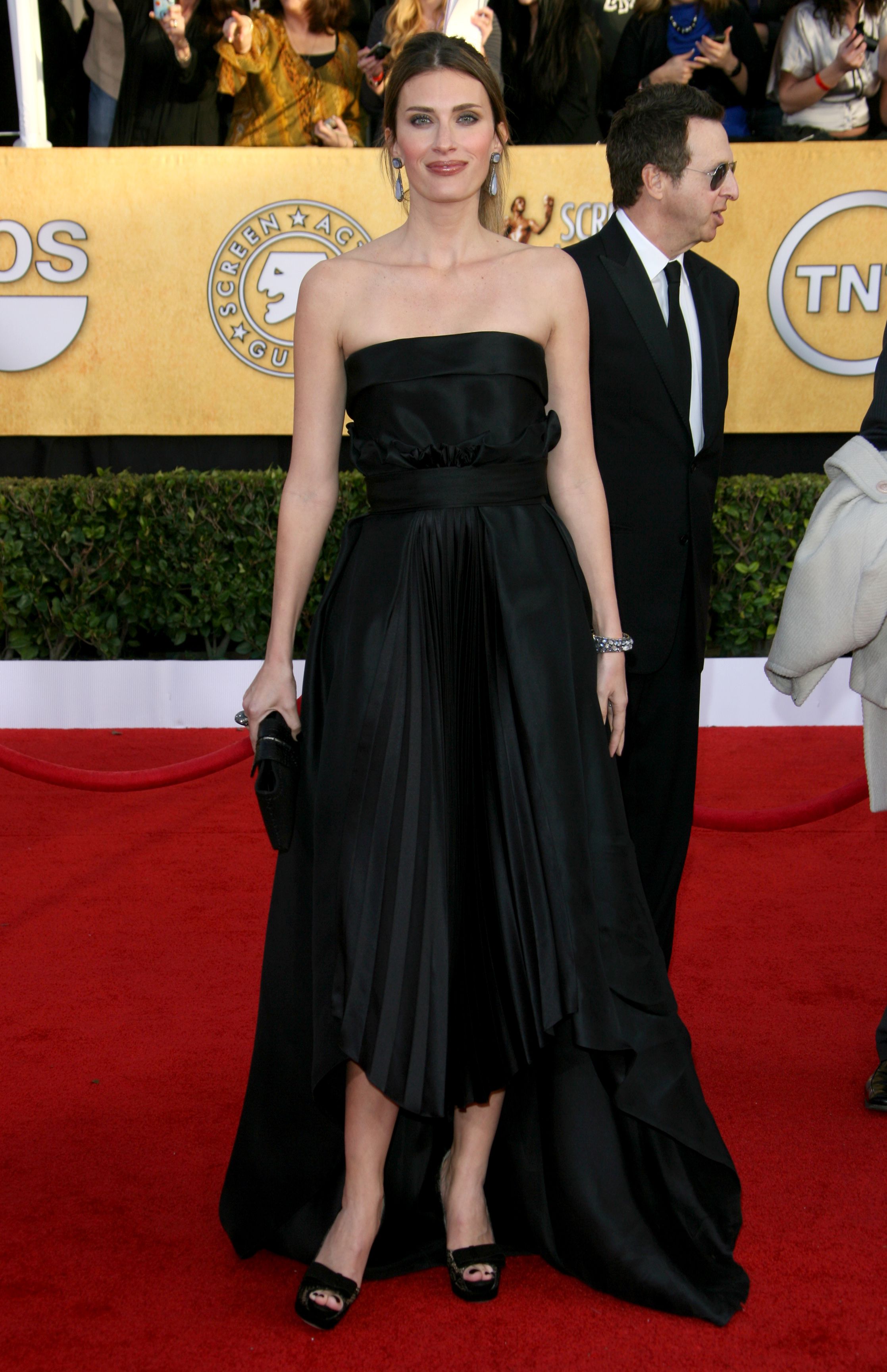 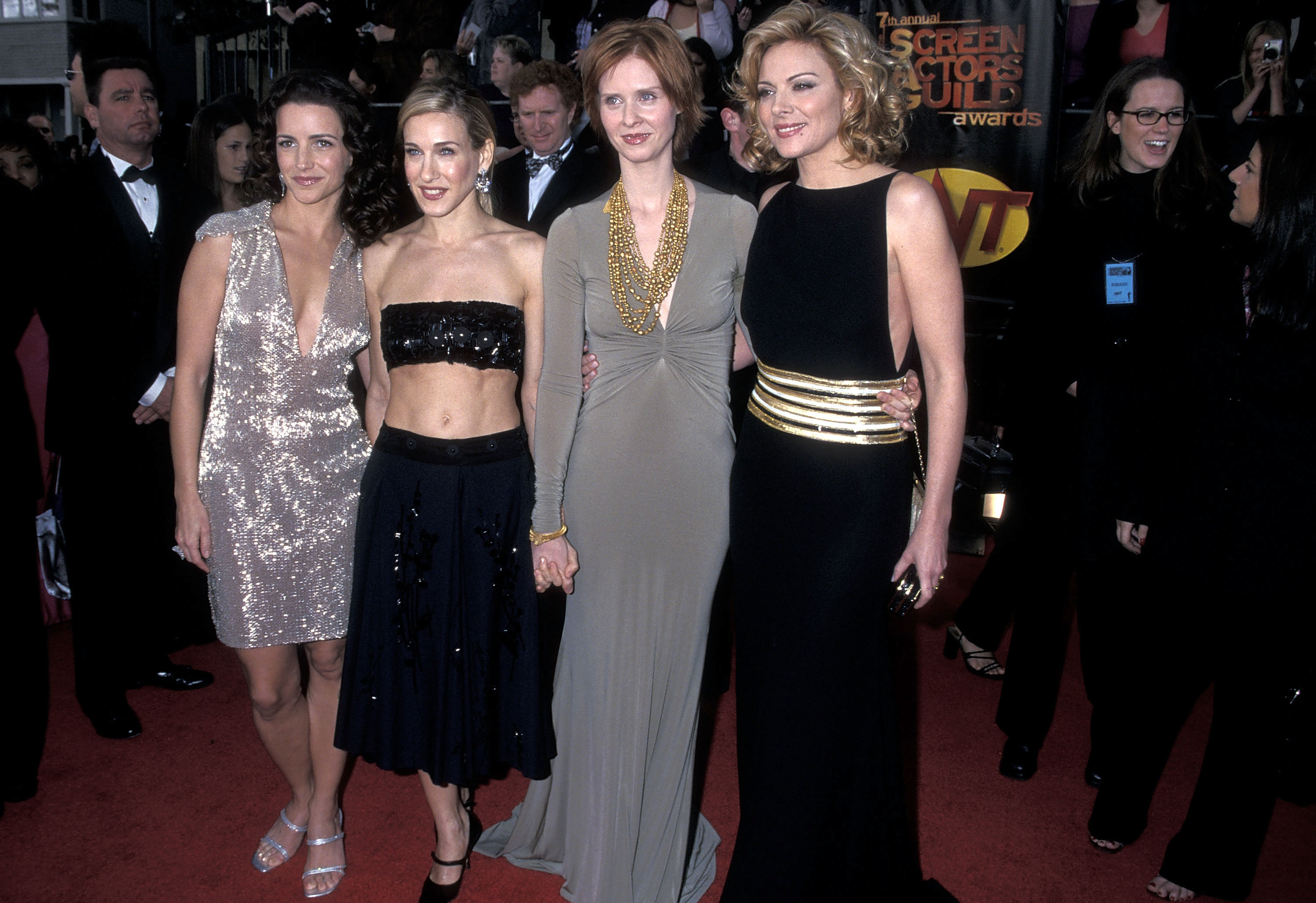