First a ‘Little White Lie,’ Then a Solid Commitment

Shortly after Summer Hofford and Dr. Sujay Kulshrestha connected on Tinder, they agreed to meet at a Chicago bar one cold and rainy Saturday in April 2016. Their first round of drinks went smoothly.

“She was so beautiful and intelligent, I just thought she was out of my league,” said Dr. Kulshrestha, 29, a resident physician in general surgery at Loyola University Medical Center in Maywood. He is also working on a two-year National Institutes of Health clinical research fellowship.

First-date magic seemed to be on the side of Dr. Kulshrestha, until he pointed to a bar across the street and suggested that they go there for a second round of drinks.

“He was really nice,” she said, “but an hour or so into the date, it was kind of getting rainier and colder and darker.”

Feeling as if she would rather spend the rest of a gloomy day curled up with a good book, Ms. Hofford told Dr. Kulshrestha that her roommate was locked out and needed to get back into their home immediately.

Suddenly, Dr. Kulshrestha was toast-less in Chicago, as the woman he once thought was out of his league now very much looked as if she would be out of his life.

“I had gone on a lot of Tinder dates that month and was feeling a little burned out,” Ms. Hofford said “I also felt as if we were running out of things to say to each other.”

So she told him what she jokingly described as “a little white lie.”

“I thought I had pulled it off smoothly,” she said, laughing. 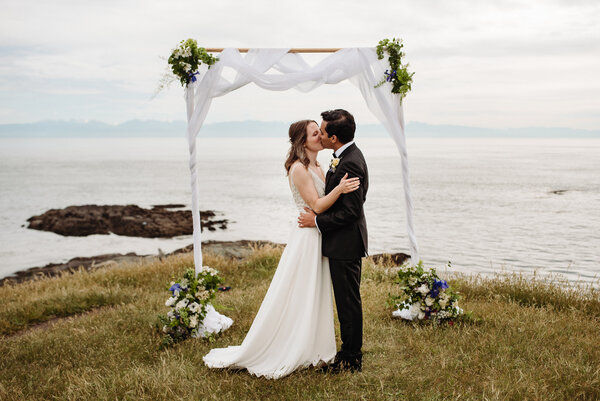 But Dr. Kulshrestha had thought all along that she was lying and consulted with his best friend, who advised that he should reach out to Ms. Hofford again.

“I really just wanted to know if she was still interested,” he said. “So I got back in touch.”

His second effort was worth toasting, as Ms. Hofford explained that while she did have a change of mind between rounds of beer, she never had a change of heart.

They began dating again, and soon they had to reassess their relationship, as Dr. Kulshrestha began interviewing for general surgery residency programs.

They each made a solid commitment, and avoided a long-distance relationship when Dr. Kulshrestha was matched with Loyola University Medical Center near Chicago, where both were already living.

They were engaged Sept. 1, 2019 at the Montrose Bird Sanctuary in Chicago, overlooking a tranquil Lake Michigan. With a view of the skyline as a natural backdrop, Dr. Kulshrestha dropped to one knee and surprised Ms. Hofford with a diamond ring.

The couple were married May 30 in an outdoor ceremony at Iceberg Point on Lopez Island, off the coast of Washington State. Ian Freed, who became a Universal Life minister for the event, officiated with 10 guests in attendance.

The couple had planned to get married aboard the MV Skansonia, a retired ferryboat on Lake Union, in Seattle, with 150 guests, but the coronavirus forced them to change plans.

Among the guests were the bride’s parents, Leanne Skooglund and Harry Hofford of Seattle, and the groom’s, Kunjamma and Pankajb Kulshrestha of Bloomfield, Conn.

“The weather was great and we basically had the whole island to ourselves,” the bride said. “Everything was just perfect.”