ONE single woman has revealed that she goes to great lengths to pretend she lives with a boyfriend to feel safe around male delivery men.

Model Silken Chu, who lives in Vancouver, Canada, ensures she constantly keeps her home looking like she lives with her man, as it gives her peace of mind. 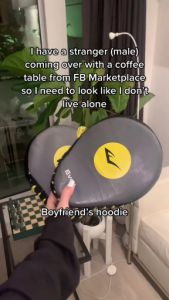 Taking to her TikTok account, Silken shows how she leaves men's clothing, including boxing gloves around the house to look like 'her man' is there.

Posting under the domain @sulken she said: "I have a stranger (male) coming over with a coffee table from Facebook Marketplace so I need to look like I don't live alone."

The model shows how she places men's shoes in her hallway and has an Ipad playing a man's voice in the background under a soundtrack called "Boyfriend roleplay, deep voice, jealous boyfriend."

"Is that a man's voice coming from another room?" she said.

Adding: "Boyfriend's hoodie" as she throws a man's hooded jumper on the couch.

She also places boxing cloves in plain sight in the living area as well as a skateboard.

"Oh does my boyfriend like to box," she said.

"It's sad really that this is what we have to do to be safe" commented one person.

Another added: "My parents always told me to leave work boots outside my house when a repairman came over."

"Yep, I shout to my imaginary husband when food delivery comes right before I open the door. 'James food is here lad'" commented a third. 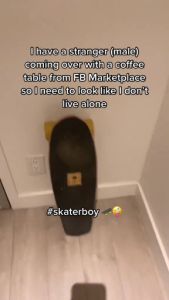 More on dating, I thought I’d met the man of my dreams on a blind date but then he took me to meet his mum… and she was dead

In related news, one woman is stunned after Hinge date unleashes vicious tirade when she makes an offhand comment

Meanwhile…I made $13k a month in my waitress job but my man’s mum hated it – I quit to make her happy, then he dumped me anyway.