For Melbourne teenagers currently enrolled in year 12, disappointment is an uncomfortably familiar feeling. Over the past two years, school camps have been cancelled, excursions scuttled, and achievements have been largely celebrated virtually rather than in classrooms.

But 2022 has seen one major event back on the agenda: the school formal. The milestone evening enjoyed by year 11 and 12s has been anticipated with even more excitement, preparation and joy now that lockdowns are a thing of the past. 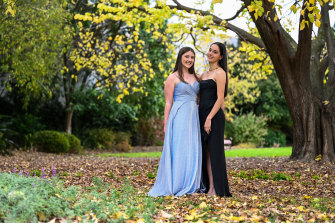 Emily Hall, who attends Kingswood College in Box Hill South, was geared up for her year 11 formal last July, only to have it cancelled last minute.

“I almost defined my teenage years as going to formal with a perfect dress and looking beautiful – my Cinderella moment! And then it was cancelled a week out.”

At least she already has the dress for her upcoming year 12 formal. She hit websites specialising in circular and nearly-new fashion such as Poshmark, Depop and Facebook Marketplace. When her perfect dress eventually materialised, the $400 price tag was exorbitant. Serendipity stepped in when she discovered she could rent the House of CB garment from her sister’s friend for $75. “It’s a black gown with a slit and a built-in corset. It is very elegant; a little bit Breakfast at Tiffany’s. And I will be pairing it with some pearls.”

For a 17 to 18-year-old, The Dress is where most of the pre-formal energy is spent. Some students hit the shops; others peruse online, generally willing to spend anywhere from $150 to $500.

Skyla Ruthven, from McKinnon Secondary College, first amassed a mood board of favourite dresses on Pinterest. She found her blue Jadore gown in the first store she went to with her mother after a failed shopping expedition with friends. 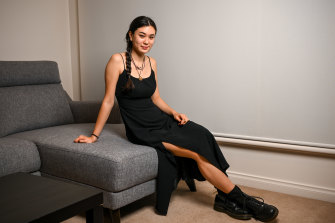 Hannah Ogawa is going vintage with an op-shop dress.Credit:Eddie Jim

Facebook groups are purpose-built for their respective year levels at school to ensure that there is no chance of outfit doubling up. At Hall’s school, girls post to the group anonymously but at other schools students post individually and gather cyber squeals of approval. Why Facebook? The format is superior to scroll through past posts, but Charley Cowen, of King David School in Armadale, laughs that “I don’t even know how to use it! None of my friends use it [normally]; we just download the app for formal season and delete it afterwards.”

Hannah Ogawa from Bialik College in Hawthorn says she was told that using Facebook was “customary and a tradition,” herself noting that rituals and traditions seem to hold weight; they were a way to have something reliable at a time when nothing else necessarily was so. As such, her mother will give her a corsage to wear around her wrist and she’s swept up in the excitement of hiring a limousine with friends. It’s an expense she doesn’t mind, given that her top option dress is a $20 vintage find from an op shop; she’s also considering wearing her hair in plaits. “I don’t want to look really old; I want to look youthful and make it quite playful. But I reckon I’ll decide on the day.”

Cowen, too, says that many girls in her year opted for vintage dresses: “Lots of my friends are very thrifty and love the vintage look, so some wore their mum’s dress or got dresses from vintage or op shops for ethical reasons, as well as for price.” She adds that it’s one way to guarantee a dress “will be different from what other girls are wearing.”

She nearly had a dress disaster herself: she only found her dress online a week before her formal, hoping it would ship in time. (It did.) At her school, not all the girls wore dresses: “There were lots of girls wearing suits. Some were androgynous and some were really feminine. For some it was about fashion, but there was a bit of gender expression and what people feel comfortable wearing, too.”

The reverse could happen as well: McKinnon Secondary College’s formal saw one costume change when a boy swapped out his suit for a white dress halfway through the night. 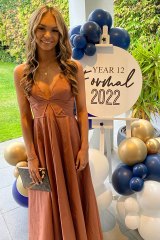 Facebook groups are also set up for limousine rides, pre-parties and after-parties. Taya Minin, from McKinnon Secondary College, lowered her expenses by scoring a ride to her formal from her parents. She wasn’t so happy with the shoes she bought (“comfort was not a factor, unfortunately”) and opted not to get a spray tan, like many others.

Professional hair and make-up is a non-negotiable for many girls. Tiana St John from Caulfield Grammar School also added a tan, manicure and pedicure. Still, she says: “What is surprising is that what you wear and what you do before doesn’t matter; it’s more about when you get there. Celebrating with your year level is actually the most important thing.”

Make the most of your health, relationships, fitness and nutrition with our Live Well newsletter. Get it in your inbox every Monday.

Most Viewed in Lifestyle