A man who asked a woman to move out of the reserved train seat he had bought has asked whether he was wrong to get upset when she refused to move.

The unnamed commuter, from Northampton, had booked the train from London on a busy day of cancellations, and took to Reddit to reveal how he had become embroiled in a battle over the seat.

The man, who described himself as a ‘6’3 black guy with a voice deep enough to make Darth Vader jealous’ revealed that upon entering the train, he realised that a woman was sitting in his seat and politely asked her to move.

However the woman refused, sparking a 10-minute argument during which other commuters claimed that ‘someone like him shouldn’t be harrassing an innocent lady like her’ . 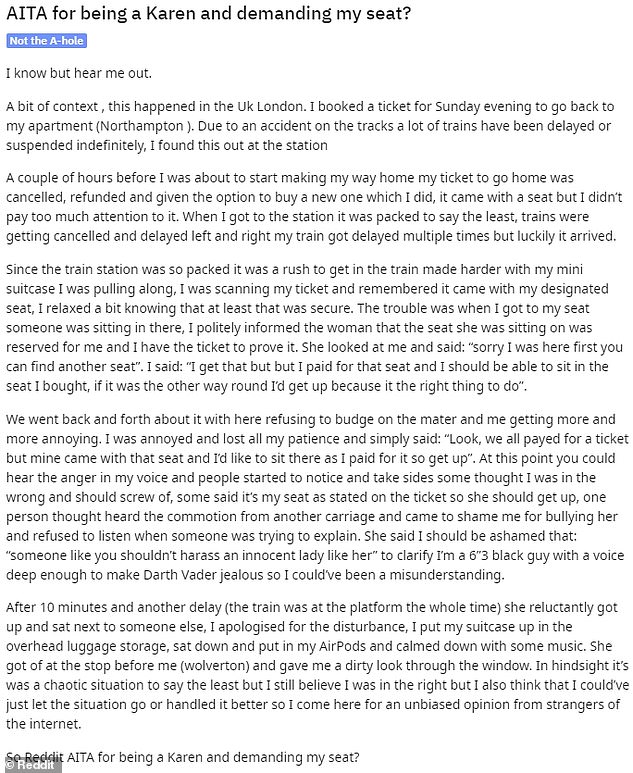 Speaking about the train incident the man said, ‘When I got to the station it was packed to say the least, trains were getting cancelled and delayed left and right my train got delayed multiple times but luckily it arrived.’

‘Since the train station was so packed it was a rush to get in the train made harder with my mini suitcase I was pulling along, I was scanning my ticket and remembered it came with my designated seat, I relaxed a bit knowing that at least that was secure.’

‘The trouble was when I got to my seat someone was sitting in there, I politely informed the woman that the seat she was sitting on was reserved for me and I have the ticket to prove it.’

After going back and forth for quite some time and both parties becoming more agitated, the man angrily pointed out that he had paid for the seat, at which point people started to intervene.

He continued: ‘Some said it’s my seat as stated on the ticket so she should get up, one person heard the commotion from another carriage and came to shame me for bullying her and refused to listen when someone was trying to explain.’

‘She said I should be ashamed that: ‘someone like you shouldn’t harass an innocent lady like her’.’

However the woman eventually conceded that it was his seat and let him sit down.

The man explained: ‘After 10 minutes and another delay (the train was at the platform the whole time) she reluctantly got up and sat next to someone else, I apologised for the disturbance, I put my suitcase up in the overhead luggage storage, sat down and put in my AirPods and calmed down with some music.’

‘She got of at the stop before me (Wolverton) and gave me a dirty look through the window.’

Commenters, especially those who travelled on British train regularly, jumped to the man’s defences.

One person wrote, ‘You paid for the seat it’s yours simple as that.’

Another said that the woman was being unreasonable, explaining: ‘I’m from the UK too and trains have been horrific atm and I’ve had mine cancelled too, if someone told me i was sat in their seat I would just get up.’

A third said, ‘Most UK trains (especially those that go to and from LONDON) have little digital screens above the seats stating what seats are reserved for the full journey, reserved for part of the journey and available.

‘She choose to sit in someone else’s seat and then refused to move when explained to her.’

Many others were quick to point out that they detected racist language used in defence of the woman keeping the seat.

Another person agreed saying. ‘The subtle coded language wasn’t missed… But like you said. You paid for your seat. That’s how it works.’

‘If you board a flight and sit in someone’s premium paid seat, they would tell you to move even though you technically sat down first. Same concept. She could have and did find another seat. If that “innocent” woman had purchased a seat, and “someone like you” had refused to move, it would have probably been a completely different story…’

A third agreed and thought the women arguing were weaponising their whiteness, adding: ‘Plain and simple racism and bigotry. You paid for that seat, and you should have it. If the “innocent lady” thought that it wasn’t a big deal she should’ve moved in the first place and not used the “I came first” argument.