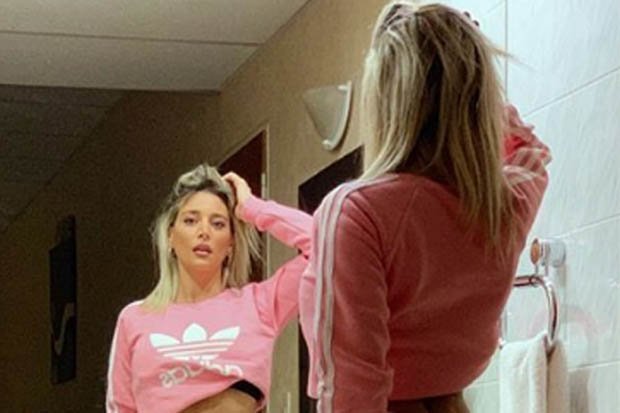 Argentinean beauty Sol Perez earned herself a massive following of 4.2 million on Instagram.

The blonde beauty has been in the spotlight since local media dubbed her “Argentina’s hottest weather girl”.

Posting on social media, Perez announced a competition where six winners could win a number of Adidas merchandise.

Accompanied with the caption, the bombshell shared a picture where she wore a small pink adidas jumper.

She stood facing the mirror – while the photographer snapped the picture behind – showcasing her jaw-dropping physique.

Perez teamed the sweater with a pair of white boots and a very tiny thong.

Then she held her hair as she posed seductively in front of the bathroom mirror.

Since she shared the photo two days ago, Perez secured more than 412,000 likes.

“Every day [you are] more beautiful”

And it’s no surprise that her followers were left gushing at the post and rushed to leave a comment.

One praised: “Every day [you are] more beautiful.”

Another complimented: “How cute.”

This comes after the hot weather girl made a surprise X-rated confession during an interview.

Then she admitted to viewers: “I would like wider hips and more bum.”