The survey of 15,000 Australians conducted by YouGov on behalf of the Australian Conservation Foundation found 67 per cent of voters believed the government should be doing more to address climate change, including a majority in all 151 national seats.

The results, which were matched against census data by YouGov for a so-called regression analysis, also found there is similar support for climate action among rural and city voters. 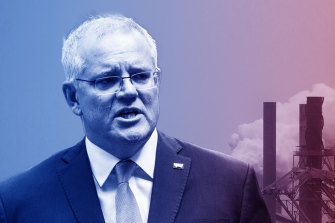 Australia’s approach to climate change is coming under increasing pressure.Credit:Getty

In the Prime Minister Scott Morrison’s electorate of Cook, up to 59 per cent of voters wants more done on climate action, but 35 per cent support his plans for new coal and gas-fired power to meet Australia’s future energy needs.

In Deputy Prime Minister Barnaby Joyce’s seat of New England, up to 55 per cent of voters wants more action and the same proportion do not believe coal and gas-fired power stations should be part of Australia’s future energy supply.

Almost 70 per cent of Victorian voters want the federal government to do more on climate, while in regional areas of the state this figure is slightly lower at 65 per cent.

Not surprisingly, the numbers are lower for Coalition voters: in Greater Melbourne just over half want more to be done, while in regional Victoria it’s 47 per cent.

A third of Labor voters in metropolitan Melbourne said climate change was their number one issue. For Coalition voters this number was about 24 per cent.

In the two most marginal Victorian Coalition-held electorates – Chisholm and Higgins – climate action plans are the number one priority for about one in three voters (29 per cent and 37 per cent).

In Labor’s most marginal Victorian seat of Dunkley, a quarter of all voters (26 per cent) say plans for action on climate change are their priority in the next federal election.

Monash academic and political commentator Zareh Ghazarian said the polling showed there was obvious concern about climate change, but it was impossible to say how this would translate into voting behaviour.

“It’s interesting data because you can see climate change is important to a lot of people,” Dr Ghazarian said.

“I suspect it would be at the top of the political agenda if we weren’t in a pandemic, and there is an appetite in the community for governments to be putting clearer ideas forward.“

“I suspect [climate change] would be at the top of the political agenda if we weren’t in a pandemic.”

“But in the last election voters didn’t seem to embrace an opposition that was proposing a range of reforms in this area. There is a sense they wanted to keep policy ideas steady.”

Climate change is the number one federal election issue for 29 per cent of NSW voters and one of
the top three issues for 67 per cent.

It is the most important issue for 31 per cent of Coalition voters in metropolitan areas and for one in five in regional electorates.

Mr Morrison has said the government intended to get to net zero as soon as possible and preferably by 2050, though critics are calling for a firm target.

The government is expected to come under international pressure during the COP26 talks to increase its 2030 goals, though some of its MPs, particularly in the Nationals, are concerned about the economic and political cost of increased action.

ACF chief executive Kelly O’Shanassy said the group commissioned the polling because it believes time is running out to stop run away climate warming, and it expects key decisions to be made on Australia’s efforts in the lead up to COP26 and the next election.

“We also wanted to get polling down to an electorate level if we could possibly do it because that was a good way of measuring the diversity of views in Australia, but it’s also a good piece of information for MPs to see whether they are doing what their constituents want done.”

She said she was not surprised by the overwhelming support for renewable energy the survey found, but was that those views were shared in so-called coal seats.

“Even the electorates that have coal and gas communities in them are rejecting the idea of coal and gas being a big part of our energy future going forward,” she said.

The poll found that in the Queensland regional electorates of Flynn, Capricornia, Maranoa and Dawson support for new coal and gas-fired power projects is 40 per cent or less.

One LNP adviser who asked not to be named said that if the poll was correct and held true until the election it suggested that climate could present a political problem in some seats in the next election.

He noted, for example, that the research suggested that in battleground seats like Gilmore, Eden Monaro and Macquarie concern about climate was high. Because all these seats had been hit hard by Black Summer bushfires he expected that concern to be maintained until the election.

But he warned that in other seats voter concerns may shift from climate as the campaign began.

A second Coalition strategist said he was not surprised by the finding that concern about climate change was widespread in rural and regional electorates, and the government was aware that this was the case.

He said the government’s mantra of “technology not taxes” was based on an astute understanding that Australians want to see climate action but did not want some communities unfairly penalised to achieve it.

He said that if the poll asked had asked voters how much they were willing to spend on climate action, or what their communities should sacrifice to act on climate, its results would have been significantly different.

Cristina Talacko, chairwoman of Coalition a pro-climate action group aligned with the Liberal and National parties said the finding about the level of concern about climate change among rural and regional voters was significant.

She said the perceived divide on climate change between rural and urban voters had been used as an argument against taking stronger action was disproved by the poll.

“This has been the major problem [for those in the parties wanting more action]. It has always been the argument that a lot of Nationals utilise,” she said.

“The cities and regions more or less have the support level to support renewables, and they support the transition, they support a target,” she said.

“That’s strategically that’s what [Nationals MPs] have to look at.”

How the survey was carried out

YouGov surveyed 15,000 people across all 151 Australian seats and then conducted what is known as multilevel regression with post-stratification on the sample using Australian Bureau of Statistics data. The process is based on the principle that people with similar characteristics tend to share common attitudes and attributes. The outcome of such an analysis is a prediction with a range. The numbers presented in the ACF report are mean estimates, which are typically very close to the middle of that range.