The Therapeutic Goods Administration lawyers also allege the United Australia Party leader breached copyright by taking select extracts from the regulator’s adverse event notifications database, which were then distributed to the public through text messages. 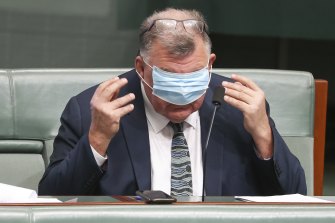 “Lawyers for the Therapeutic Goods Administration (TGA) have written to United Australia Party leader, Mr Craig Kelly MP, alleging it has breached copyright and demanding that it stop distributing incomplete extracts of adverse event reports relating to COVID-19 vaccines which the TGA believes could be seriously misleading,” the medical regulator said in a statement.

The party, founded by Queensland billionaire Clive Palmer, has sent messages to more than 14 million phones with misleading information about vaccines.

Last week the medical regulator was preparing to take legal action against Mr Kelly over the text campaign.

“The TGA is very concerned about any information which provides an incorrect picture of the safety of COVID-19 vaccines, particularly if that information is distributed widely to the public,” a spokesman said on Friday.

“The TGA has acted in an effort to ensure that the public receives accurate information about adverse event reports.”

The database of adverse event notifications does not show whether a medicine or vaccine caused the reported side effect. The TGA has to conduct further investigations before any connection can be confirmed, and reports of confirmed or probable adverse events linked to the vaccines are published in weekly vaccine safety reports.

The regulator said statements that emphasise further investigations are needed before conclusions can be drawn are included in the database and related reports.

“The extracts disseminated by the United Australia Party excluded this important information at the beginning of the reports as well as the statement indicating that the information are subject to copyright under Australian law,” the TGA statement said.

The United Australia Party text message said: “Australian Government’s COVID-19 Vaccines Adverse Events Report” and asked people to follow a hyperlink which led to a campaign website using the TGA’s logo and the Commonwealth coat of arms. The website, which looks similar to an official government website, said 448 deaths were a reported outcome following a COVID-19 vaccination.

But TGA boss Professor John Skerrit said the regulator has only linked nine deaths to the vaccines. So far, about 23.4 million doses of both the AstraZeneca and Pfizer vaccines have been administered across the country.

Late last month, Mr Kelly – who has been vocal in his support for disproven coronavirus treatments and dismissed the efficacy of vaccines – refused to apologise for the first spam text message of his campaign, which said: “You can never trust the Liberals, Labor or Greens again”. At the time he said he was “absolutely not” sorry and bulk messaging was “100 per cent legal”.