Baby diagnosed with cancer days after his father finished treatment

A toddler was left fighting for his life after being diagnosed with leukaemia just days after his dad finished his treatment for a similar type of blood cancer.

Saffron Webb, 26, from Ely, Cambridgeshire had been looking forward to her partner Ollie, 27, finishing his cancer treatment for Hodgkin’s Lymphoma.

However the couple were devastated when less than two weeks later, Alfie Webb, now aged one, was diagnosed with acute myeloid leukaemia on 1 November last year when he was 10-months-old.

It’s rare for a child of Alfie’s age to have the disease, as myeloid leukaemia is a type of blood cancer more common to those over the age of 60. 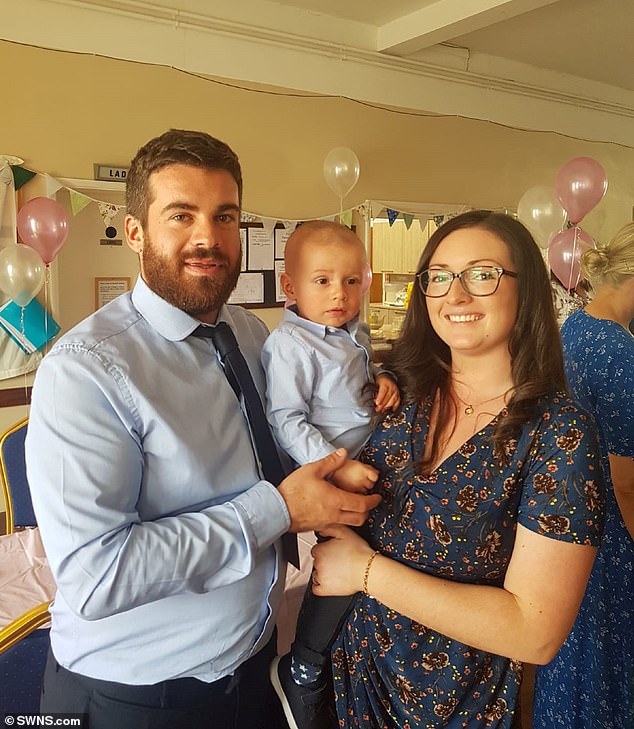 Saffron Webb, 26, from Cambridgeshire and her husband were left devastated when, just days after Ollie, 27, finished treatment for blood cancer, their son 10-month-old son Alfie was diagnosed with a similar disease

Ollie received his diagnoses in August 2018 and he had three weeks of radiotherapy – he finished treatment 23 October 2018.

Alfie’s illness began when he developed sickness and a high temperature, but after several days of being ill, his mum decided to call ambulance.

Doctors at Addenbrooke’s Hospital initially thought Alfie might have meningitis, however after further tests doctors confirmed a diagnosis of acute myeloid leukaemia. 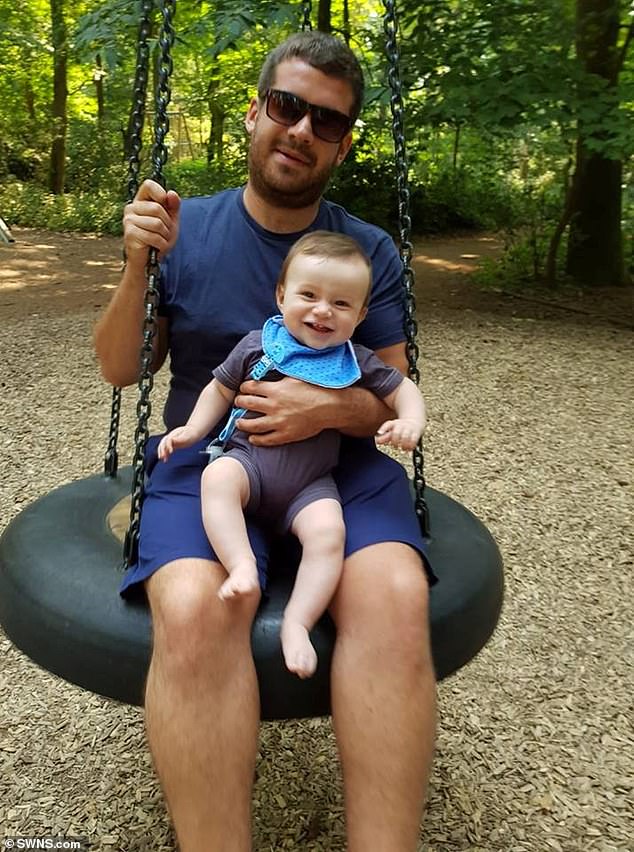 Ollie praised his son Alfie’s strength, saying despite the shock of the diagnosis, Alfie ‘takes everything in his stride he amazes’ them all 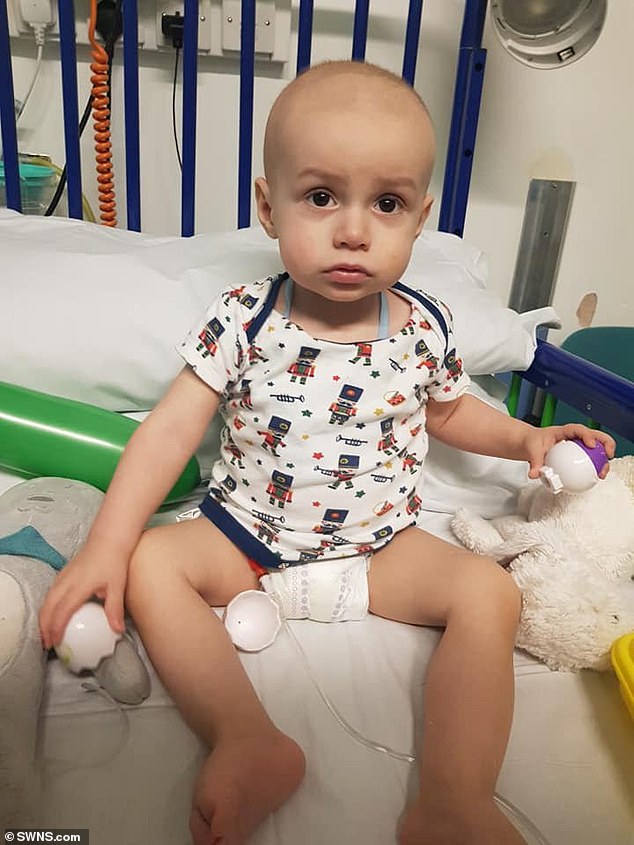 The little boy spent months in hospital having chemotherapy, spending much of the time in an isolated room due to his low immune system

Nursery assistant Saffron said: ‘To be told that Alfie had leukaemia was a massive shock and completely devastating for us.

‘Alfie’s dad Ollie had just finished treatment for cancer and hadn’t yet had the all clear, so at that point I didn’t know if either of them would be okay.’

Ollie, a linesman electrical engineer, revealed: ‘It was a massive shock to the whole family it was completely devastating.

‘Alfie is extremely strong little boy, he takes everything in his stride and he amazes us all’. 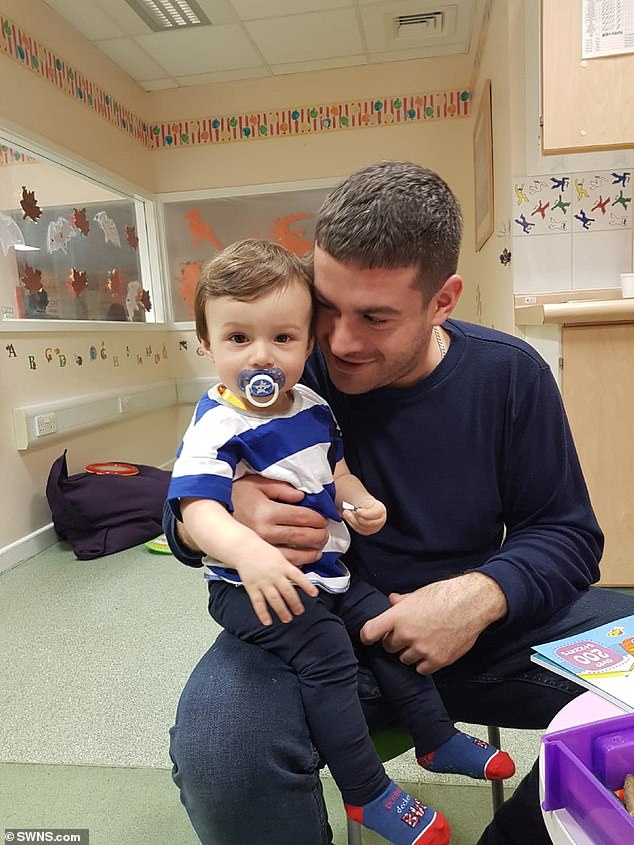 Ollie, pictured with his son Alfie in hospital. The little boy started chemotherapy just days after his diagnosis

The little boy started chemotherapy a few days after his diagnosis and remained in hospital for six months.

The youngster endured four cycles of chemotherapy and frequent platelet and blood transfusions.

Saffron added: ‘At hospital he would be crying at the door because he wanted to go outside.

‘When he was having chemo he couldn’t move as he was hooked up to the machine but all he wanted to do was crawl around’. 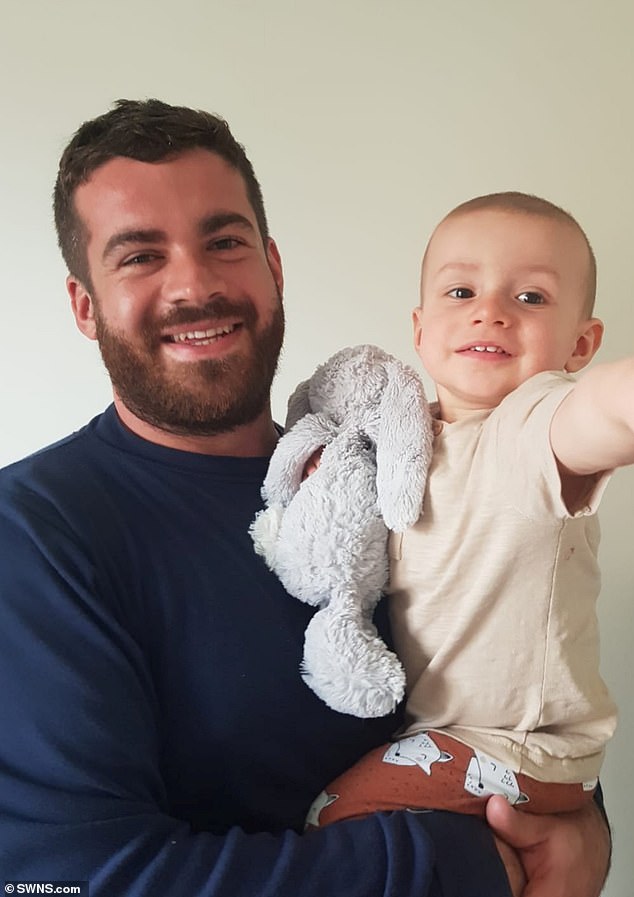 Alfie had four cycles of chemotherapy and frequent platelet and blood transfusions, but will need a stem cell transplant to cure his cancer

What is acute myeloid leukaemia?

Acute myeloid leukaemia is an aggressive and rare form of blood cancer.

The symptoms of AML usually develop over a few weeks and become more severe.

According to NHS Choices, the symptoms include:

In advanced cases, patients are incredibly vulnerable to life-threatening infections and internal bleeding.

If a GP suspects leukaemia, they will arrange a blood test to determine blood cell production.

In AML, stem cells within the patient’s bone marrow produce too many immature white blood cells, which are not capable of fighting infection.

This also can lead to a decrease in production of the oxygen-carrying red blood cells and platelets that help the blood to clot.

Each year around 2,600 people in the UK are diagnosed with blood cancer.

After diagnosis, patients need urgent chemotherapy due to the aggressive nature of the cancer.

In some cases, radiotherapy may be needed along with a bone marrow or stem cell transplant.

Due to Alfie having a weakened immune system and increased risk of infection, he was only allowed to be around a small number of people.

Saffron, who has been with her partner Ollie for nine years, said: ‘He caught various infections and viruses in hospital, which sometimes resulted in us having to stay in a barrier room.

‘This was a room away from other patients, with no windows, so it felt like being at the bottom of a boat.’

But the family said they tried to make it as bearable as possible, and revealed:  ‘We even spent Christmas day in a barrier room. We dressed up as elves as we wanted to make it fun, but it really wasn’t the best first Christmas for Alfie.’ 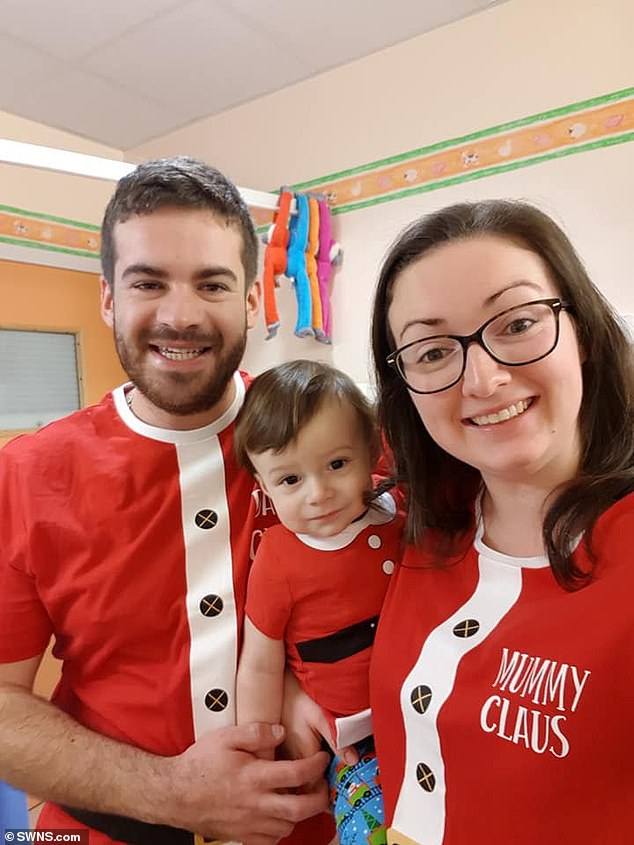 The couple spent their first Christmas with their son Alfie in hospital, but dressed up as elves as an attempt to make it more fun for the little boy

Alfie has recently finished his chemotherapy treatment but continues to wear a hickman line – a central venous catheter most often used for the administration of chemotherapy.

However, his family have also told that he may need a stem cell transplant to cure his cancer and stop it returning.

The parents are now urging people to sign up as potential stem cell donors with blood cancer charity Anthony Nolan, as there is currently no one on the list who is a perfect match for Alfie.

Saffron, who is now home with her partner Ollie and son Alfie, added: ‘Being back home is amazing, he just loves being at home. When I take him into his bedroom he keeps saying “wow”. 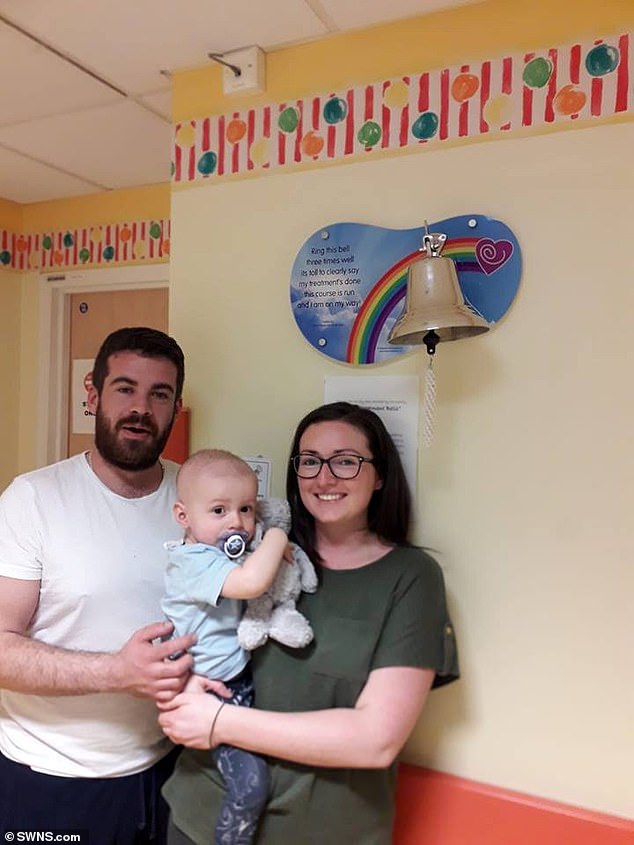 Alfie spent months in the hospital during his treatment, and was only allowed to see a limited number of people due to his weakened immune system

But she said the family are still ‘not back to normal’, revealing: ‘He still has his Hickman line in case he needs a transplant, this restricts his movement and he still can’t be around too many people.

‘It’s all up in the air at the moment and we’re just waiting, which is really hard.’

Ollie added: ‘It is vital that we raise as much awareness as possible and recruit more people to the stem cell register to help thousands of other people in our situation.’

Alfie’s grandmother, Karen Miller, 52, who is campaigning for Anthony Nolan charity, said: ‘Doctors thought there would be hundreds of people on the register who would be the best possible match for Alfie, so they were extremely shocked to find there wasn’t anyone. 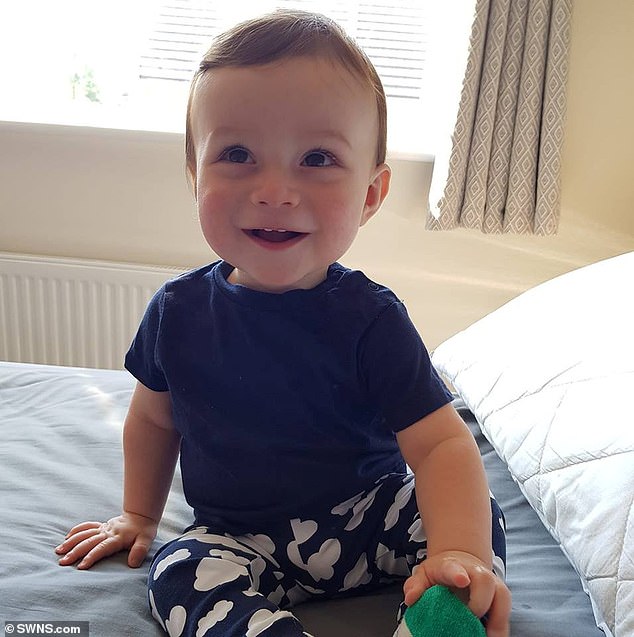 Doctors insist that Alfie needs a stem cell transplant in order to beat the cancer, and have been stunned to discover they cannot find a ‘match’ for him

Revealing she’s recruited 140 people to the register so far, she explained:’I’m spreading the word until I’m blue in the face. We have met other people on the ward who can’t find a match and we know how important it is.

‘We want to help all those other people, not just Alfie, we’re always thinking about the other children that are left behind.’

Sarah Rogers, Anthony Nolan Regional Register Development Manager said: ‘We are doing everything we can to support Alfie’s family and it’s extremely heart-warming that they are thinking of other families and their search for a donor, during this difficult time. 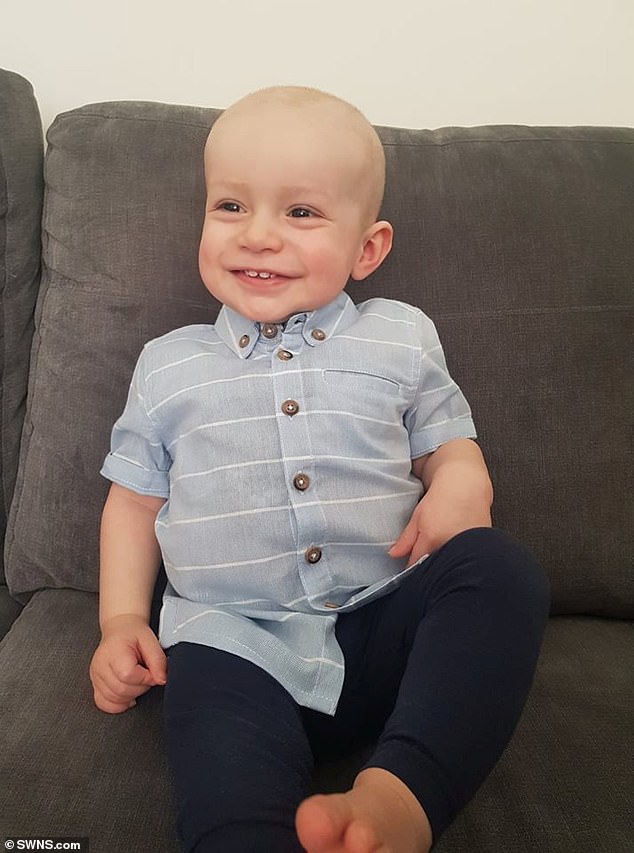 Alfie is now living at home, but things aren’t back to normal yet, as he is waiting for a stem cell transplant

‘Every single person who signs up to the register has the potential to give hope to someone who is in desperate need of a lifesaving stem cell transplant.

She added: ‘We’re particularly calling on young men aged 16-30 to consider joining the Anthony Nolan register as they provide more than 50% of all stem cell donations but make up just 18% of our register.

‘Together, we can work towards a future where nobody is waiting for their match.’

The family are now trying to fundraise for a treatment called CAR T therapy as an alternative, a highly complex and relatively new treatment isn’t readily available at all NHS hospitals.

It involves collecting and using the patients’ own immune cells to treat their condition and can cost up to £150,000.