The room into which a clean-shaven Bo Burnham steps at the beginning of Inside is neat, tidy, almost empty. It doesn’t take a genius to know it won’t stay that way for long.

Inside is a one-man musical-comedy special born of our very strange times. “If you’d have told me/a year ago/that I’d be locked inside of my home,” Burnham sings in the opening number, a typically ’80s-synth-pop flavoured tune, “I would have told you/a year ago/with respect now leave me alone.” 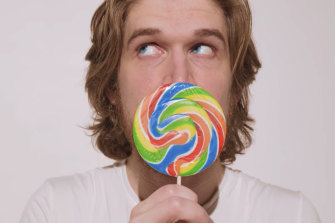 Burnham’s takedown of ‘white women on Instagram’ is comedy gold.Credit:Netflix

Over the course of 87 minutes, the 30-year-old comedian and actor – seen most recently on the big screen as Carey Mulligan’s would-be nice-guy boyfriend in Promising Young Woman – conducts a tour of duty of the mental and emotional warzone known as Lockdown. His hair and beard grow longer, his mood swings wildly, the songs range from hilarious to bleak, and that room fills with clutter.

Burnham shot and edited the show on his own, and the inventiveness of his staging in the compact confines of an attic studio is really something. The one-manness of the production is evident in the fact Netflix, normally so rich in promotional material, doesn’t even have stills or a press kit for the show. It’s as if it dropped from nowhere while the bigwigs were otherwise occupied.

No-frills it may be, but Inside might just be the essential document of our times. COVID as a threat to life barely figures, but the impacts on the state of mind are obvious. 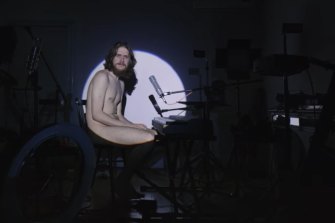 Burnham isn’t afraid to expose himself for the sake of a gag, or a lyric. Credit:Netflix

“Robert’s been a little depressed,” he sings in that opening number, which swiftly establishes the dynamic and the vibe of the whole show, “and so today I’m going to try just/getting up, sitting down, going back to work/It might not help but it couldn’t hurt.”

At its funniest, the comedy is self-reflective and excoriating, tapping into the self-importance and hypocrisy of Hollywood’s liberal activist set while acknowledging the need for change. “The world is so f—ed up,” he says in a spoken-word bit in the middle of the song Healing the World With Comedy. “Systematic oppression, income inequality [pause] … the other stuff. There’s only one thing I can do about it [pause] … while being paid and being the centre of attention. [Singing] Healing the world with comedy/making a literal difference, metaphorically.”

He’s a sharp, incisive lyricist (echoes of Tim Minchin and Flight of the Conchords there), a perceptive performer, a decent tunesmith. He uses the limits of the space as a canvas for creativity, but ultimately paints a picture of claustrophobia and cloying ennui, perhaps full-blown depression. A master ironist, it’s impossible to tell just how sincere Burnham is when he says “I’m not doing great”, but I’m inclined to think quite.

It’s not all gloom, though, far from it. There are great bits on Facetiming with his Mum (while she’s “covering her camera with her thumb”), sexting, gaming, the internet, Catholic guilt, white women on Instagram (a visual tour de force), and more.

With Inside Burnham has given us a funny, raw, endlessly inventive record of the year of isolation much of the world endured. It’s a document of our times that soothes with laughter and comforts with the knowledge that no matter how much it felt otherwise, we really weren’t alone.