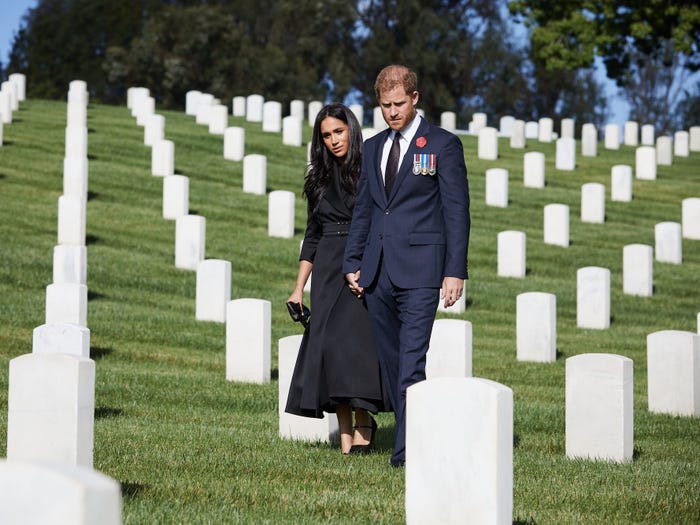 Royal courtiers turned down Prince Harry's request to take part in the royal family's Remembrance Sunday service on November 8, according to The Telegraph and The Sunday Times.

The Duke of Sussex reportedly asked that a wreath be laid on his behalf at the Cenotaph, where the Queen and members of the royal family led tributes to those who died in the two world wars and other conflicts.

However, he was denied on the grounds that "he is no longer representing the monarchy," according to the Times. The publication added that The Queen was not made aware of Harry's request.

This comes after royal aides told The Times that the palace wanted to distance itself from the couple after they openly discussed politics and the US election, which is said to be against protocol.

The Duke and Duchess of Cambridge, The Prince of Wales and The Duchess of Cornwall, Princess Anne, and The Countess of Wessex were among those present at the Remembrance Service on Sunday.

According to a post on the royal family's official Instagram account, The Duke of Cambridge, The Earl of Wessex, The Princess Royal, and The Duke of Kent all laid wreaths at the Cenotaph, and wreaths were also laid on behalf of the Queen and Prince Philip, who were not present at the event.

The duke agreed to stop using his official military titles after he resigned from the royal family this year.

Harry and Markle were still able to pay their respects from California. The couple made a private visit to the Los Angeles National Cemetery on Sunday, where they laid flowers that the duchess picked from their garden at the gravesites of two commonwealth soldiers.

Harry signed a message with the wreath, which read: "To all of those who have served, and are serving. Thank you."

The duke also honored the day with an appearance on the Declassified podcast's military special, where he said: "Even when we can't all be together, we always remember together."

The former working royal served in the army for 10 years, undertaking two tours of Afghanistan, where he served as "Captain Wales" before rising through the ranks to become "Major Wales."

Speaking of his own experiences, he said: "When I get asked about this period of my life I draw from memories, I draw from what I remember and who I remember. Like the first time we were shot at and who I was with, the first casualties we saw, and those we saved. And the first medivac we escorted out of contact in a race against time. Once served always serving, no matter what."

Buckingham Palace and representatives for The Duke of Sussex declined to comment when contacted by Insider for this article.

END_OF_DOCUMENT_TOKEN_TO_BE_REPLACED

END_OF_DOCUMENT_TOKEN_TO_BE_REPLACED
Recent Posts
We and our partners use cookies on this site to improve our service, perform analytics, personalize advertising, measure advertising performance, and remember website preferences.Ok