Home » Lifestyle » Clare Crawley Flaunts Her Ring After ‘Blowing Up’ The ‘Bachelorette’: I’m ‘Excited’ To Get Married

Clare Crawley Flaunts Her Ring After ‘Blowing Up’ The ‘Bachelorette’: I’m ‘Excited’ To Get Married

After Clare Crawley got engaged to Dale Moss just two weeks into the new ‘Bachelorette’ season, the couple appeared on ‘GMA’ to show off her ring, and say they ‘could not be more excited’ to tie the knot.

It’s been three months since Clare Crawley and Dale Moss got engaged on The Bachelorette, and now that the exciting news is finally out in the open, she has a lot to say! Clare appeared on Good Morning America on Nov. 6 to give an update about where things stand with Dale today. “It feels very surreal,” said Clare, summing up the feelings of Bachelor-nation. Her move to pick him, just four episodes into the season, has been described as “blowing up the Bachelorette,” but she was clearly still happy with her decision.

“It happened a few months ago but it feels so fresh. I could not be more excited.” During the chat, she showed off her “blinding” ring, and confirmed that things are still good between her and Dale. “Honestly, after the first night, and even I said it…I knew it was special in my mind and in my heart, everything was written,” said Dale. He said that he knew “it would be and her at the end of the day.”

Clare also weighed in on the reaction to her decision. It seems that not everyone in the Bachelor/Bachelorette fandom was keen on her finding love so quickly. “I be lying if I said it’s been easy, because I’m human, and the things people say without knowing the full truth,” she said. She also remarked how it “blows my mind” that in this world, “when there’s so much negativity and hare right now,” that people would spend time trolling or criticizing her decision. “Honestly, I just want to send them love. Hurt people hurt people. I just want to send them nothing but love.”

So, all is good with these two. Ahead of their GMA appearance, Clare and Dale went on Instagram Live to show off their ring and talk about their future plans. “We’re gonna go see my family soon too, this weekend. No not this weekend, actually, let’s go during the week. We’re gonna go next week. Monday, Tuesday, Wednesday …hometowns?” said Dale. “Hometowns in South Dakota. Claire’s never experienced snow like South Dakota.”

“I’m so excited. I’ve been in snow in Lake Tahoe, and I’ve been in snow in Vermont. So about to hit up South Dakota,” added Clare. When Dale inquired about how she knows Vermont, she replied, “A little thing called Bachelor Winter Games.” When asked if Clare and Dale were going to do a “long-distance” relationship, they revealed that they’re not. “The great thing about all of this,” said Dale, “is you know that we’ve already been looking and we have the ability to be any and everywhere.” Clare also chimed in to say that they “went house hunting the other day.” 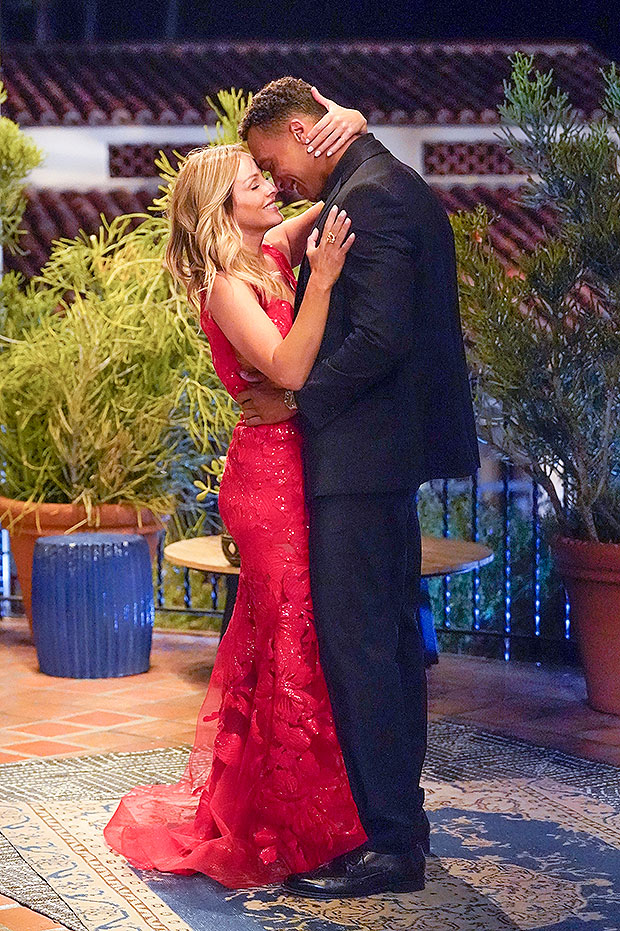 There were still 16 other men left on The Bachelorette when Clare decided she was ready to end her journey on the show and pursue Dale. From the moment Dale stepped out of the limo on night one, Clare felt an immediate connection, and Dale’s feelings were mutual. When Clare told him that she was falling in love with him, he said it back, and their relationship was on the fast track.

After spending the night together, Clare and Dale knew that they wanted to be in each other’s lives forever. Their time on the show ended with one final rose ceremony, where Dale got down on one knee and proposed. Clare happily accepted and received an absolutely stunning, Neil Lane ring from her man.

Now, Clare and Dale are finally able to flaunt their love publicly, and they clearly could not be happier. On the Nov. 10 episode of The Bachelorette, they’ll appear together for an even more extensive sit-down. The show airs on Tuesdays at 8:00 p.m. on ABC.

END_OF_DOCUMENT_TOKEN_TO_BE_REPLACED

END_OF_DOCUMENT_TOKEN_TO_BE_REPLACED
Recent Posts
We and our partners use cookies on this site to improve our service, perform analytics, personalize advertising, measure advertising performance, and remember website preferences.Ok