The majority of Australians want action on climate change even if it costs them significant money, with the longest-running poll of attitudes also showing nearly two-thirds would back a ban on new coal mines and even the re-introduction of a price on carbon.

The Lowy Institute’s 2021 climate poll, which has been taken annually since 2006, found 60 per cent of the 3286 respondents viewed global warming as “a serious and pressing problem”, reversing most of a minor dip a year ago at the height of the first wave of the coronavirus outbreak.

The bulk of Australians want action to address climate change and support a carbon price as part of that action.Credit:Nick Moir

“We really found, for so many things, they were just eclipsed by COVID,” said Natasha Kassam, the director of Lowy’s Public Opinion and Foreign Policy Program, adding the trajectory has now returned to a rising trend.

Nationally, young people were more concerned with the climate issue, with 76 per cent of those aged between 18-29 rating it as serious compared with half of those over 60. While that margin was little changed from earlier surveys, there has been some closing of the gap about climate concerns between urban and regional views, but they remain at 63 and 56 per cent, respectively.

The results come days after a NSW byelection in the Upper Hunter, one of the most coal-dependent electorates in the country. The Nationals defeated Labor in Saturday’s election, although both parties lost primary votes, with Labor’s tally slumping by about a quarter.

During the six-week campaign, all parties, other than the Greens, backed the coal industry while several independents, including Kirsty O’Connell, drew support for calling for a transition out of fossil fuels.

Ms Kassam said Lowy’s wide-ranging findings “should give a little more confidence to those elected members who want to do more” to address climate change.

For instance, almost three-quarters of respondents agreed that the “benefits of taking further action on climate change will outweigh the costs”, with less than a quarter saying the opposite.

“That’s a really strong result” since debate over had climate had been “mired for so long over costs”, Ms Kassam said.

BHP’s Mt Arthur coal mine near Muswellbrook in NSW’s Hunter Valley. Almost two-thirds of those polled by Lowy favour a ban on new coal mines in Australia. Credit:Janie Barrett

Similarly, almost two in three of respondents, or 63 per cent, said they would support a ban on new coal mines in Australia, with the same proportion backing a reduction in coal exports.

Of those aged between 18-44 years, 72 per cent support the mining ban, compared with 55 per cent of respondents aged over 45.

Former prime minister Malcolm Turnbull called for such a moratorium on new coal mines in late March, comments that triggered opposition from some politicians and media commentators and resulted in him being dumped as head of a NSW government climate advisory board a week later.

The Morrison government’s determination so far to avoid committing to a firm goal of reaching net-zero emissions by 2050 is also at odds with popular opinion.

The Lowy poll found 78 per cent backed carbon neutrality by governments by 2050.

All states have already set such a goal – with the ACT aiming for 2045 – while the federal government has only vowed so far to achieve carbon neutrality “as soon as possible and preferably by 2050”.

One policy that politicians other than the Greens have tended to avoid is the use of carbon pricing as a key policy tool.

Some 64 per cent said they would back either a carbon tax or emissions trading scheme, a policy that the Abbott Coalition government axed in 2014 two years after it was introduced by the Gillard Labor government.

Among respondents aged 18-44 per cent, the support for a carbon price was 71 per cent, while 57 per cent of those over 45 backed such a policy. 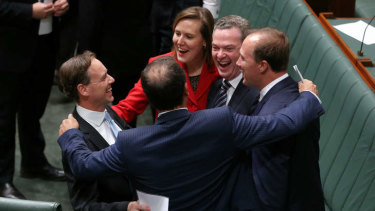 Then federal environment minister Greg Hunt is congratulated by colleagues after carbon tax repeal bills passed the lower House in 2014. Lowy’s poll indicates support for the return of some form of price on greenhouse gas pollution.Credit: Alex Ellinghausen

The Morrison government, though, might draw some solace from the survey, with 58 per cent supporting the increased use of gas for electricity generation.

Another energy source is gradually gaining favour, with backing for the lifting of the existing ban on nuclear power now roughly equal to the opposition, at 47 per cent in favour with 51 per cent against.

That ratio supporting the end of the ban on nuclear energy is up from 35 per cent in favour in 2011, with 62 per cent opposed at the time, Ms Kassam said.

Our Morning Edition newsletter is a curated guide to the most important and interesting stories, analysis and insights. Get it delivered to your inbox.