Why? Largely because it showcases that rarest of current Hollywood triumphs – a veteran comedy icon being funny with the sort of open-hearted grace and dignity that’s escaped his ageing contemporaries. 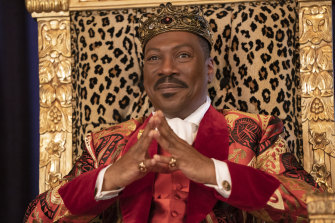 A feelgood update on the 1988 classic, the film – featuring an all-black cast, endless crowd-pleasing star cameos, and largely filmed at rapper Rick Ross’ Atlanta mega-mansion – takes aim at ever-lingering patriarchal values, transforming the original’s Prince and the Pauper storyline into a celebration of female influence, leadership and empowerment.

At a time when most of Murphy’s ageing fellow comedians – including Jerry Seinfeld, Ricky Gervais, John Cleese and Mel Brooks – have been regularly railing at political correctness for supposedly wrecking comedy, it’s an example that feels almost revolutionary.

It’s also somewhat unexpected. How did we get here? How did Eddie Murphy become a blueprint for how iconic comedians can remain hilarious and relevant while embracing a thoughtful sensitivity to the current times? He was, after all – as his standup specials Delirious (1983) and Raw (1987) proved – once the epitome of irascible irreverence.

Raw, with its extensive use of homophobic slurs and off-colour remarks about the AIDS crisis, has long drawn controversy. In a 2019 profile in The New York Times where he recalled being picketed in the ’80s for his standup sets, Murphy described a lot of his old material as “ignorant” and cringed at the “kind of an asshole” he now sees on display in the landmark 1987 special. It echoed an apology he first made in 1996 in which he described the material as “the words of a misinformed 21-year-old”. 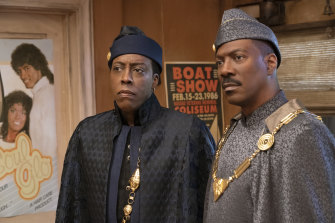 Dr Benjamin Nickl, a cultural studies expert at the University of Sydney, says context is key. Being one of the few African-American comedians in a heavily white mainstream milieu leant Murphy’s early work an intrinsic political edge.

“Back when he was on Saturday Night Live in the early ’80s, his audience wanted him to be racy and offensive, that’s what the whole comedy scene was all about,” he says.

“In Beverly Hills Cop (1984) there he was driving a Ferrari and having sex all around, very unrestrained in the way he parodied the power of being a cop in the most white, upper class part of America you could think of. He really played with ideas of race, of being black in Hollywood and not giving into the pressures of the dominant society.”

But as Murphy’s preference shifted away from confrontational standup to wide-scale, family-friendly comedies such as The Nutty Professor, Dr. Dolittle and Shrek – a period long regarded by critics as his professional nadir – that context got complicated.

Nickl compares it to the fresh debate around Dr Seuss’s discontinued books, with free speech zealots arguing that cancel culture is destroying canonical works when any casual reader of a Seuss title would understand that any hint of outdated cultural insensitivity or marginalisation goes entirely against the tolerant message his books, such as The Sneetches, sought to convey.

“At that point you have to ask yourself, who wanted him to be offensive and for what purpose?” Nickl says of the critical indifference towards Murphy’s gentler output. “Was it the black audience, was it the white audience? What kind of content or entertainment value did they expect from him?”

Comedian and podcaster Cameron James, an Eddie Murphy super fan whose childhood introduction to the comedy star’s work came during that post-Dolittle era “that everyone makes fun of him for”, says Murphy’s evolution is inspiring because of its defiance.

“He was so young when he got famous, about 21 when Raw came out, and he was so good-looking and oversexed and his standup persona was this loud, cool arsehole, and I think that’s all anyone ever wanted him to be after that. But the thing about Eddie is he’s not actually that guy. He was playing the part of the brash, cocky upstart to an extent,” says James.

“The Eddie you see in the ’90s and now, where he seems like a sensitive, quiet, shy guy who just really cares about playing different characters, is the real Eddie Murphy. You see him in interviews now – he was on Jimmy Kimmel a few nights ago promoting this movie with Arsenio Hall – and he’s a totally different guy, so serious. Talk show hosts will try and bring up classic bits of his and he just kind of nods and smiles, but he doesn’t play along, he doesn’t give a soundbite.”

James says whenever conversation among his fellow comedians turns to Murphy’s work, someone will inevitably bring up the homophobic and misogynistic content found on Delirious and Raw.

“I always like to remind them, ‘Yes, but he also thinks that gear sucks!’” says James. “Sure, standing up for free speech is fine, but you know what’s cooler? Admitting that you don’t actually believe the offensive things you once said and that you were wrong.

“People change, times change, tastes change and I think a real comedian should be able to look back on their material and think, ‘Yes, that’s dated. It might’ve been with the times back then, but now I don’t believe that.’ That’s exactly what Eddie Murphy’s done.”