The dark side of ‘Manctopia’s’ £1 billion property boom: Viewers left outraged by the ‘disgusting’ eviction of a homeless charity from its base of 20 years as the area is regenerated to make way for luxury apartment blocks

Manctopia: Billion Pound Property Boom viewers were left outraged last night after watching the eviction of a homeless charity from an area being regenerated to make way for luxury apartment blocks.

Judith Vickers appeared on the second episode of the documentary series on BBC2 last night, as she revealed her struggles to maintain her homeless charity after they were evicted from their base.

After 20 years working in the Charter Street Mission, Judith was forced to pack up all of her supplies without knowing where she was going to next and relocate to a building two miles from the city centre.

Viewers were outraged over the eviction, with one commenting: ‘It’s pretty disgusting that the council don’t seem to be helping Judith finding another place to house her charity.’ 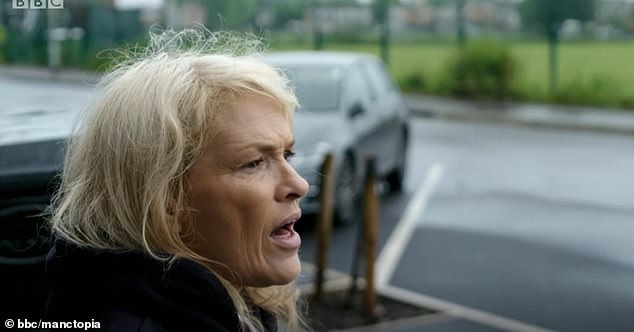 Judith Vickers, from Manchester, appeared on Manctopia: Billion Pound Property Boom last night as she struggled to find a new base for her charity after being evicted

At the start of the programme, Judith explained how the charity has been left busier than ever with more than 5,000 people homeless across the Greater Manchester.

She explained that her charity was ‘very important’ because ‘it’s somewhere to go to get a fresh set of clothes and feel normal for the day.’

She explained that the weekends were particularly busy, saying: ‘We used to think a busy breakfast would serve about 75 but now we have regular numbers of 100 to 125 every Saturday to Sunday morning. 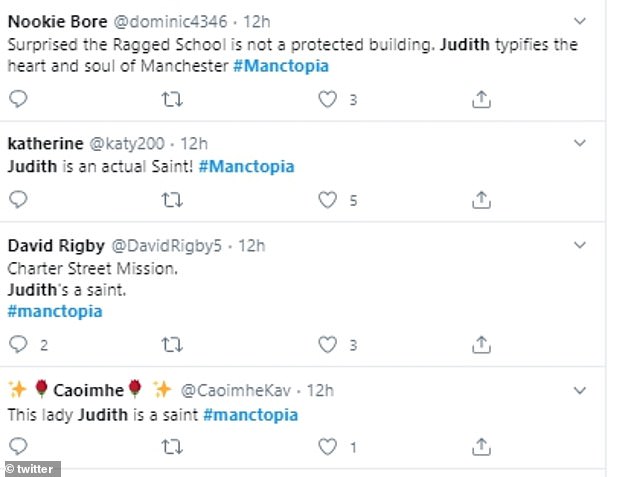 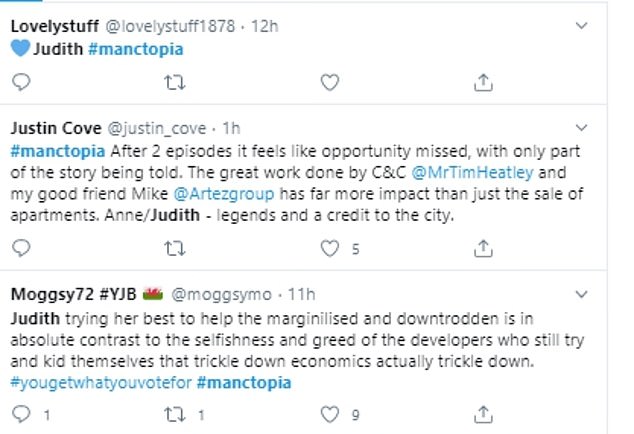 ‘Its not just about food provision, it’s about a feeling of community. Some of my clients have been coming here for 20 years.’

However, Judith found herself in the middle of a regeneration scheme with two apartment blocks already under construction just next door.

She was told that her landlords were renovating the building and they were giving her notice to leave.

She had three months to find somewhere new for the charity, and was forced to pack up all of her supplies without knowing where she was going next. 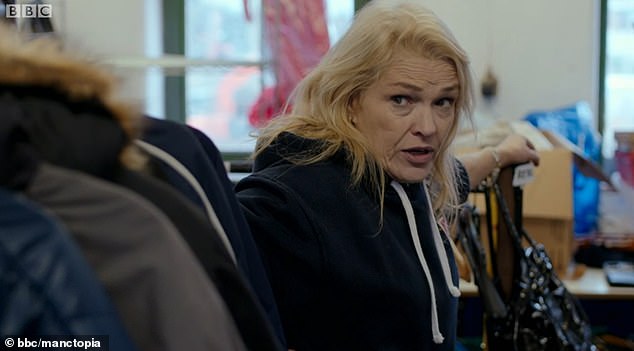 She and the volunteers believed they could keep about a tenth of their supplies.

Later, with just two weeks till her eviction, Judith considered using a building two miles out of town.

She explained the move was far from ideal, but added: ‘We just can’t find anywhere that we can afford to rent. 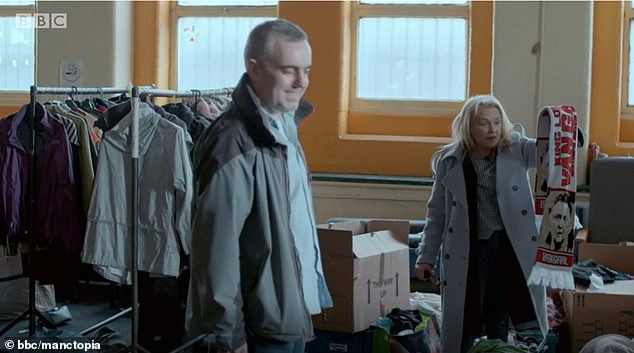 ‘And with the push of people not wanting you there. Buildings I looked at a year ago are now flattened. They’re not there anymore.

‘It’s really really difficult. And if you find somewhere but if there’s a new luxury apartment block, they don’t want you plonking in next door because you’ll lower the value of the real estate.’

But after examining the property, she felt there was no way it could work, explaining:   ‘My concern is that there’s residential above. It’s so not easy.’

Later, Judith’s time to find a new city centre base ran out and she discovered she had been locked out of the building. 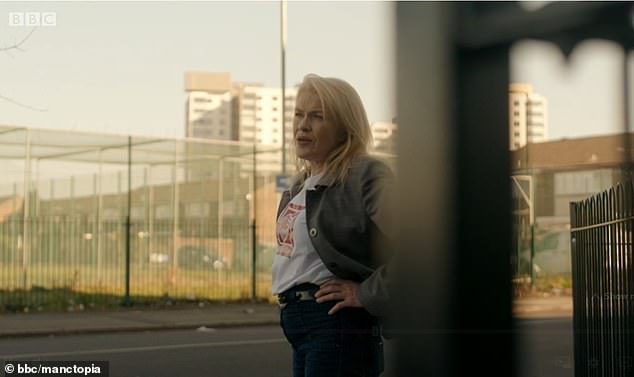 Judith called it ‘really, really difficult’ to find a new city-centre property in which to base her homeless charity

She was forced to serve breakfast from her car on the street, saying: ‘Absolute nightmare, I didn’t see this coming.

‘On the new website for the charter street vision, it says it wants to be redeveloped for a Christian building.

‘Well the last thing that they did was evict all the marginalized and poor people. How Christian is that?’

It wasn’t not long before the group begin protesting outside the building, with one man saying: ‘It’s so horrible that they’ve just locked the doors on the building and said “No you can’t do this.” 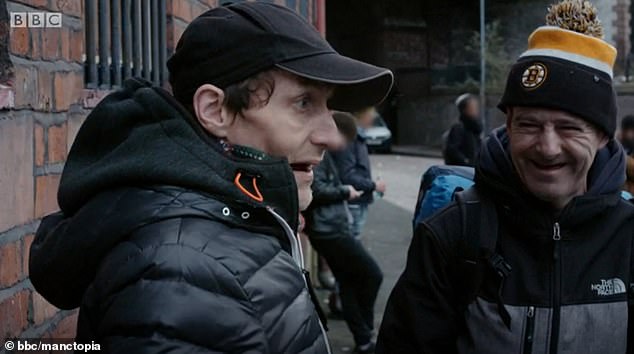 The group were left devastated after discovering they’d been locked out of their building, with Judith forced to serve clients from the boot of a car

‘They’re going to redevelop it and do what they’ve done round here. Eventually there’s going to be no Mancunians in Manchester. It’s just going to be Starbucks central.’

Meanwhile another volunteer, Tony Brennan, began lying down candles for each of the homeless people who have died in Manchester over the past year.

Stephen Agnew, one of the homeless men using the service, said: ‘One day that could be me. That’s what makes me realise that someone could be lighting a candle for me.’ 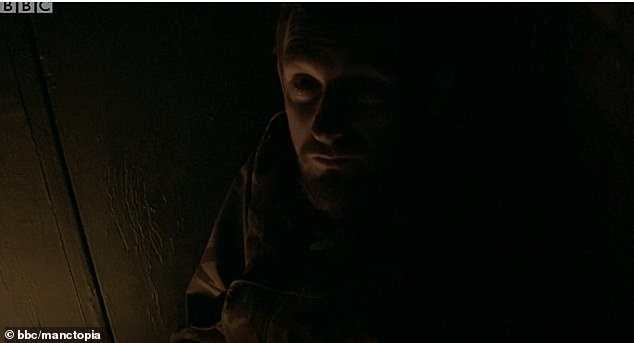 Twelve days after being evicted, Judith decided to start serving breakfast in the premises she viewed which is two miles out of town.

But the volunteers were devastated when nobody arrived for the breakfast service, which would normally be heaving.

One staff member said: ‘We always knew it would be quiet but I wasn’t expecting it to be this bad.’

After an hour without anyone arriving, a volunteer drove into the city to see if he could find anyone, picking up three more people who were waiting outside the charity’s old building. 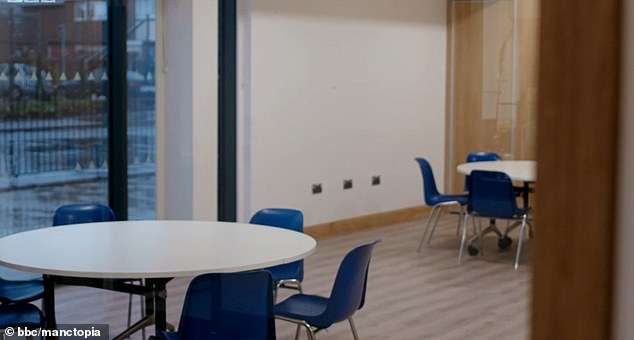 After moving to a new base two miles outside the city centre, Judith’s formerly heaving breakfast service was left empty

Judith said: ‘It’s down to the gentification of the city. I know we want Manchester to be this cosmopolitan city and the gateway of the North and encourage businesses to come into the city but at what cost to the local people.’

‘Manchester people are just being pushed out and out. Is every crane going to be a tower? You wonder where it’s all going to end really.’

Viewers were outraged by the programme, with many criticising the decision to evict Judith’s charity from the building and praising her for her hard work.

One commented; ‘Judith isn’t asking for celebrity-strewn fundraisers, she just needs four walls and a roof – why is that so problematic?’

Meanwhile another added: ‘Judith is an actual saint.’

Another wrote: ‘Judith trying her best to help the marginalized and downtrodden is an absolute contrast to the selfishness and greed of the developers who still try and kid themselves that trickle down economics actually trickle down.’

END_OF_DOCUMENT_TOKEN_TO_BE_REPLACED

END_OF_DOCUMENT_TOKEN_TO_BE_REPLACED
Recent Posts
We and our partners use cookies on this site to improve our service, perform analytics, personalize advertising, measure advertising performance, and remember website preferences.Ok