Business lobby groups have seized on the Victorian lockdown to press their case on the minimum wage, arguing the ongoing state restrictions show businesses cannot afford a rise in real wages for the country’s lowest paid workers this year.

In a last-minute set of submissions to the Fair Work Commission before its expert panel makes a decision, major employer groups including the Australian Chamber of Commerce and Industry say the lockdown has sapped confidence and threatened employment. 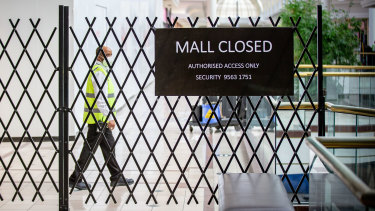 Business lobby groups argue the Victorian lockdown shows employers can only afford a small increase in the minimum wage.Credit:Darrian Traynor

Because of the lockdown, employers say the minimum wage of $19.84 an hour should go up by no more than 1.1 per cent, or about 21 cents, which is in line with recent inflation data. They argue even that should be delayed by months for sectors still struggling to recover from the pandemic such as accommodation.

“There is no confidence or certainty in Victoria this will be the last outbreak or lockdown – very far from it,” the Australian Chamber of Commerce and Industry, which represents dozens of other industry associations, says in its submission.

The Australian Council of Trade Unions, which wants a 3.5 per cent or 69 cent an hour increase, lambasted the employers, accusing them of trying to exploit hardship to pad out businesses’ profits.

“The 3.5 per cent increase in the minimum wage which we are arguing for would help millions of Australian workers and their families recover from a once in a hundred year pandemic and recession,” the secretary of the ACTU secretary, Sally McManus, said.

It would also help spur domestic spending while borders are closed, she .

Last year the Fair Work Commission awarded a 1.75 per cent wage rise but delayed its starting date based on how badly businesses had been affected by the coronavirus, with some workers only receiving last year’s rise early this year.

The commission’s hand-picked expert, University of Melbourne professor Jeff Borland, wrote this year that industries could be divided into three groups. Industries such as retail, mining and agriculture had fully recovered from the pandemic, he said, with jobs and activity at or above where they were before the coronavirus. Manufacturing and construction were almost recovered while sectors such as accommodation and food services were lagging, Professor Borland wrote.

Victorian authorities said on Tuesday the state’s coronavirus restrictions are on track to be eased later this week. The state’s Labor government wants a 2 per cent minimum wage rise while the federal government has said the commission should take a cautious approach even as it spruiks the strength of the nation’s economic recovery from the pandemic overall.