Nationals deputy leader David Littleproud has played down the prospect of major cuts to carbon emissions from farming programs in a federal climate plan due within weeks, declaring other industries must do more to reach more ambitious targets.

Urging compensation for rural Australia, Mr Littleproud said farmers had already done the “heavy lifting” in helping to cut emissions by 20.8 per cent since 2005 and could not do anything like that in the next phase of the government plan. 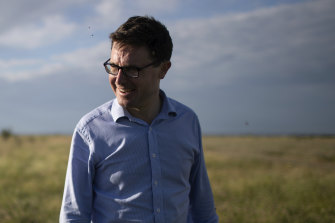 The comments heighten pressure on industries like energy and transport to deepen their cuts to emissions in the technology road map that will form part of Prime Minister Scott Morrison’s climate policy, expected to go to federal cabinet next week.

“I think that most of the heavy lifting is done on that,” Mr Littleproud said of the emissions cuts already recorded from land use programs such as preventing the clearing of vegetation on farming land.

“I think this is where the technology road map will get into some detail and I think it will demonstrate there are only very small amounts that we can probably look towards land management use to continue to reduce emissions.”

Mr Littleproud, the Agriculture Minister as well as deputy leader, is seeking more rewards for farmers to encourage biodiversity on their properties out of concern that past schemes have degraded the land, for instance by allowing weeds to get out of control in areas preserved to reduce emissions.

But he accepted farmers could not claim more payments for the carbon reductions already achieved, even though he believes they were not compensated fairly in policies over the past decade that prevented them using their land but did not pay them enough for the property right they lost.

“The carbon abatement has been accounted for and paid to state governments, but that’s why I’m trying to get farmers a payment under biodiversity for the remnant land,” he said in an interview.

“The carbon’s been accounted for and you can’t double-dip.

“We want to be able to measure on remnant land where the stewardship of that remnant vegetation has been locked away from farmers, where they can manage it in much better ways and we can get them a payment for that.”

Critics of the government have dismissed the emission reductions claimed in the past from land use change, and the Australia Institute estimates carbon output has increased 7 per cent since 2005 when the land use components are removed.

Mr Littleproud said Australians should accept that land use change was allowed under the Paris Agreement on climate change, which meant it was fair for Australia to include the results just as other countries did.

“Those are the rules that we signed up to, that the world signed up to, and you can’t change the goalposts halfway through a game of football,” he said.

“The reality is that this is all in line with the accounting standards that the United States and the European Union use.

“So the self-loathing in this country that keeps on saying that Australia has failed in terms of reducing emissions has to stop, because we’ve got a good record, a proud record.”

The reward for improving biodiversity is a key part of the Nationals’ concern about climate change policy as Resources Minister Keith Pitt calls for a $250 billion financial guarantee for the resources industry to make sure jobs are not lost in coal and gas if and when the government embraces a target of net zero emissions by 2050.

Mr Pitt aired the idea in The Australian Financial Review on Thursday but it received a cool response from Nationals leader Barnaby Joyce, who said it was not party policy.

The Nationals are expected to hold a party room meeting on October 17 to discuss their stance on the net zero target before Parliament resumes the next day, but Mr Joyce emphasised it would be a group decision rather than his call alone.

“This decision is not a unilateral one of myself, it’s one of the National party room. I’ve been having discussions with my leadership group, with Bridget [McKenzie] and David [Littleproud] … and we will have a Nationals meeting not to discuss our position but to discuss the process going forward,” he told ABC Radio National.

“I know that the Prime Minister will be no doubt bringing forward what he sees as the process and we have to then take that back to the Nationals room and let them have their deliberations and considerations over it.”