Federal ministers have seized on Monday’s violent attack on the construction union’s Melbourne office by a crowd that included some union members to blame the CFMEU for the two-week industry suspension in Victoria and argue Labor should refuse its donations.

Attorney-General Michaelia Cash lashed the violence outside the CFMEU’s Melbourne office, which trashed the entrance after bottles and other projectiles were thrown by an angry crowd, saying it was completely unacceptable thuggery that had no place in the construction sector. 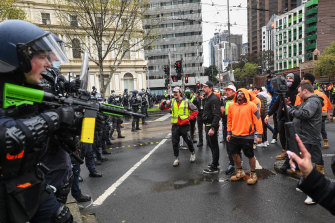 Police moved in on Monday afternoon to quell protests near the CFMEU’s Melbourne office.Credit:Justin McManus

“Today’s violence from a number of their [CFMEU] members shows that Anthony Albanese needs to cut off the CFMEU once and for all,” said Senator Cash, who is also industrial relations minister. “Given their millions of dollars in donations to the ALP, it is imperative that Mr Albanese stops accepting their donations today.”

Housing minister Michael Sukkar said 320,000 Victorian construction workers “are seemingly being punished for the actions of a violent minority of CFMEU protesters yesterday” in the form of the industry’s suspension. He called the decision, made by the Andrews government late on Tuesday night, chaotic and said it would hurt the industry.

CFMEU national secretary Dave Noonan hit back at the government, accusing Senator Cash of using an attack on the union, its staff and office to play politics. “Members of our union were attacked today, mostly by neo-Nazis and non-union members,” Mr Noonan said.

“If she could be bothered to pick up the phone or even check with the proper authorities in Victoria she would realise that her statements are factually completely incorrect,” Mr Noonan said.

“It would be better if she didn’t try and weaponise the behaviour of neo-fascists for cheap political points. It only encourages these lowlifes.”

The number of unionists in the crowd is disputed, with CFMEU Victorian secretary John Setka saying it was only a small percentage and the remainder far-right agitators and their followers. Others in the union movement have estimated a third or more of the crowd could be CFMEU members. In any case, it would be only a small portion of the Victoria-Tasmanian CFMEU’s membership of more than 30,000 members.

“I can only go off what people told me who were trapped in the building by this crowd,” former Labor leader Bill Shorten said on Today on Tuesday morning.

“Yes, there were some who were construction workers. But I’m saying, and I think I’m sure the police are aware of this too, that there is a very small group of … hard-right extremists who are trying to weaponise the COVID lockdown.”

The Victorian government has said it shut down the construction industry for two weeks in accordance with health advice, cited multiple outbreaks linked to the industry and said there was widespread failure of compliance with COVID-19 safety rules.

“We put the industry on notice just a week ago, we have seen appalling behaviour on site and on our streets, and now we’re acting decisively and without hesitation,” Industrial Relations Minister Tim Pallas said in a statement on Monday.