International delivery giant FedEx has threatened to retaliate against employees who go on strike this week by locking them out of shifts in an escalation of the dispute that raises the risk of Christmas parcel disruptions.

The company is at odds with the 64,000-member Transport Workers Union over a new pay deal for its Australian workforce, with the company offering 9.25 per cent over three years but the union wanting a better offer, saying FedEx pays much less than its competitors and makes huge profits. 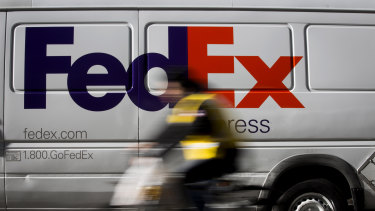 FedEx has been hit with several day-long strikes in recent months, but as not yet reached a deal with the union.Credit:Bloomberg

Unionised FedEx workers will down tools in rolling four-hour strikes that will hit different states this week, but the company has told staff that anyone who walks off the job will forfeit the remainder of that shift and their next one.

Such lockouts are typically used by employees as a legal way to deter equally legal strikes by raising the financial cost for workers in lost wages and suggesting they can do without their labour.

But they can also be a bluff or raise the stakes of the dispute because following a lockout, employees gain more rights to strike with less paperwork.

“FedEx is cutting off its nose to spite its face,” said the union’s national secretary, Michael Kaine. “Management would rather start an all-out brawl with workers at great cost to its business and customers than consider the reasonable solution brought to the table by union members.“

He accused FedEx of importing an ideological approach from its American headquarters, where the company has battled unionisation efforts, unlike its competitor, UPS, where employees typically belong to the Teamsters Union.

A FedEx spokeswoman blamed any service disruption as a result of the lockouts on the TWU.

“We are taking this action now in response to this industrial action to discourage further unnecessary disruptions to our customers and the supply chain, especially as Australia heads into the peak e-commerce holiday period,” she said.

“We are deeply disappointed the TWU has once again initiated industrial action despite FedEx offering a wage increase that is industry leading.”

As well as its pay offer, FedEx has said it would raise workers’ superannuation to 13 per cent by 2024 if they accepted its proposal and has disputed the union’s claims of low pay, saying its wages are among the highest in the industry and more than a quarter above the fallback award.

But the union argues FedEx’s pay offer is not as good as it appears because it does not properly take into account the pay rises that workers have missed since their last deal expired.

“FedEx’s four-year offer is a disingenuous swindle that would deliver annual wage rises barely above 2 per cent,” Mr Kaine said.

Supply chains across the country have been under huge strain throughout the pandemic because of problems with manufacturing and transportation overseas, industrial action by the Maritime Union of Australia on ports and increased demand for online shopping.

Firms such as StarTrack, Toll and Linfox reached deals with the transport workers union in recent months, leaving FedEx the sole focus of its campaign.