The torrid family saga captivating France: Philosopher, 71, disowns his son, 45, over autobiographical novel detailing how he dumped his ‘horse face’ wife to steal his father’s then girlfriend Carla Bruni

A well-known French father and son duo who both dated singer Carla Bruni before she married French President Nicholas Sarkozy have fallen out in a bitter public dispute over an autobiographical novel that sheds light on their private family life.

Parisian publisher and author Jean-Paul Enthoven, 71, has publicly disowned his son, philosopher and TV personality Raphaël Enthoven, 45, over his new book Le Temps Gagné (Time Saved), which lays bare parts of his and his family’s private lives under the guise of a work of fiction, according to French magazine Le Figaro.

Several characters are easily recognisable, according to critics, with Raphaël’s ex-wife Justine Lévy given the name ‘Faustine’ and her father, French philosopher Bernard-Henry Lévy, appearing as a character called ‘Elie’.

Faustine is described unkindly as ‘horse-face’ in the book and details of her intimate life are revealed. In real life, Raphaël and Justine divorced in 2001, a year after Raphaël embarked on an affair with Bruni, who was dating his father when they met.

Bruni, 52, who shares a son with Raphaël, stands out in how she is praised in the book. Her character Beatrice is described as the ‘ideal woman’. 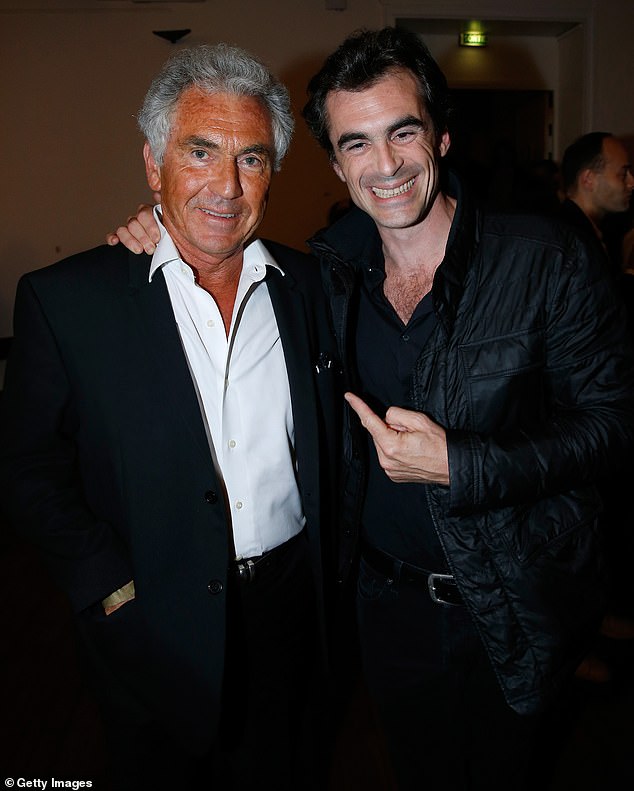 Parisian publisher and author Jean-Paul Enthoven, 71, has publicly disowned his son, philosopher and TV personality Raphaël Enthoven, 45, over his new book Le Temps Gagné (Time Saved). Pictured, the father and son together in 2016 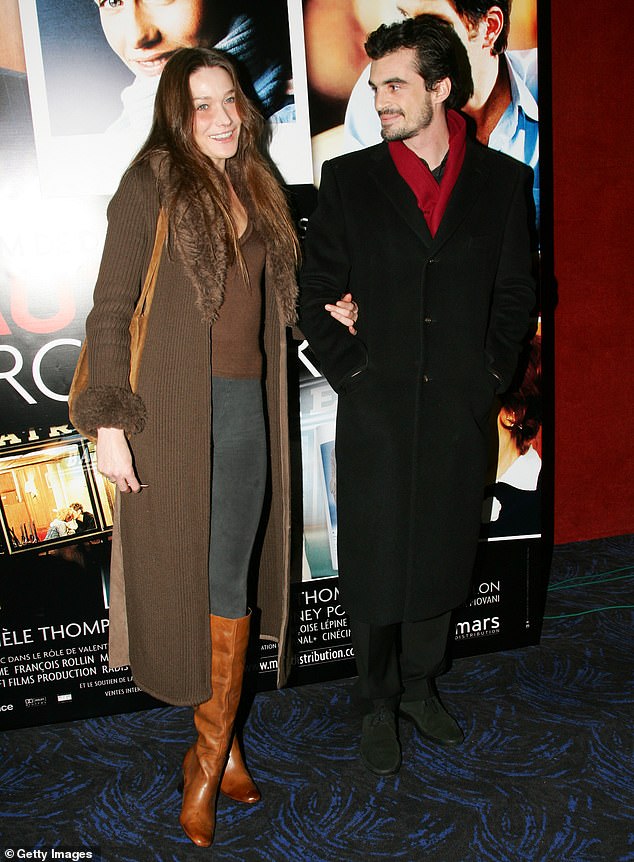 Carla Bruni, who shares a son with Raphaël, stands out in how she is praised in the book. Her character Beatrice is described as the ‘ideal woman’. Pictured, the couple in Paris in 2006

However it takes aim at Jean-Paul, with the father figure in Time Saved described as someone who is ‘too busy regretting the life he’s had’ to care for his son.

The author also writes that while his father enjoyed rubbing shoulders with the wealthy world of Parisian intellectual, he him had little fortune to his name.

The title of the book is even linked to Jean-Paul. Time Saved is said to refer to one of Jean-Paul’s favoured mottos: ‘Save time, you have to save time’.

The effect has left Jean-Paul ‘heartbroken’ and he has ‘cut all ties’ with him as a result.

It was revealed by Le Figaro that Jean-Paul Enthoven texted his son to let him know he wanted him out of his life after he finished reading his latest book, which was mostly based on the philosopher’s personal life.

The father said he was left ‘heart-broken’ by the row the book had created, and that he was ‘drowning in an ocean of ingratitude.’ 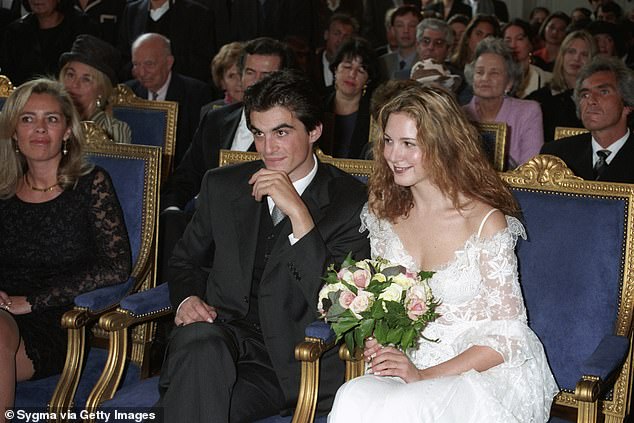 Several characters are easily recognisable, according to critics, with Raphaël’s ex-wife Justine Lévy given the name ‘Faustine’. Pictured, their 1996 wedding. The couple divorced after Raphaël started an affair with Bruni, who had previously dated his father 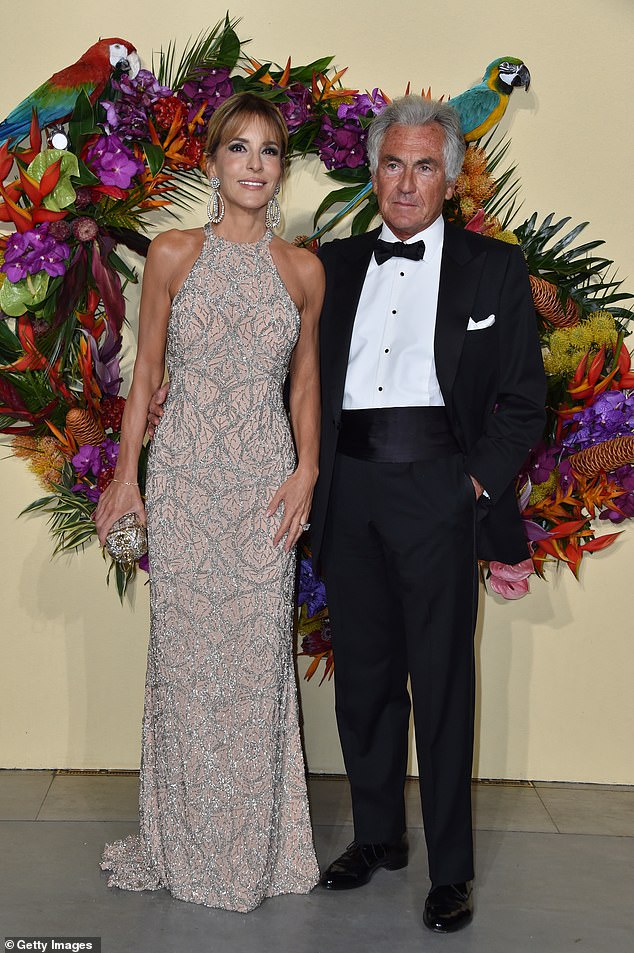 Jean-Paul Enthoven texted his son to let him know he wanted him out of his life after he finished reading his latest book, which was mostly based on the philosopher’s personal life. Pictured, Jean-Paul with his wife Patricia d’Arenberg in Paris in 2016

‘I am in mourning. My heart is broken. It’s a terrible book for those, like me and others, who have loved Raphaël and who find themselves drowning in an ocean of ingratitude,’ he said.

‘I would never have believed that my life, where he has played a central role, could take such a sad turn,’ he added.

More than the content of the book itself, it was the fact Raphaël opened their personal lives to the public that angered Enthoven Senior the most.

‘I don’t like people’s private lives to be unpacked like this in public … why should I and my loved ones be subjected to this treatment based on prying eyes and denigration.

‘Does someone have the right to tear off the masks that each of us may have needed during our lives without our consent and for their own pleasure.’

‘As Camus, who my son is so fond of quoting, said: “A man should restrain himself”,’ he concluded. 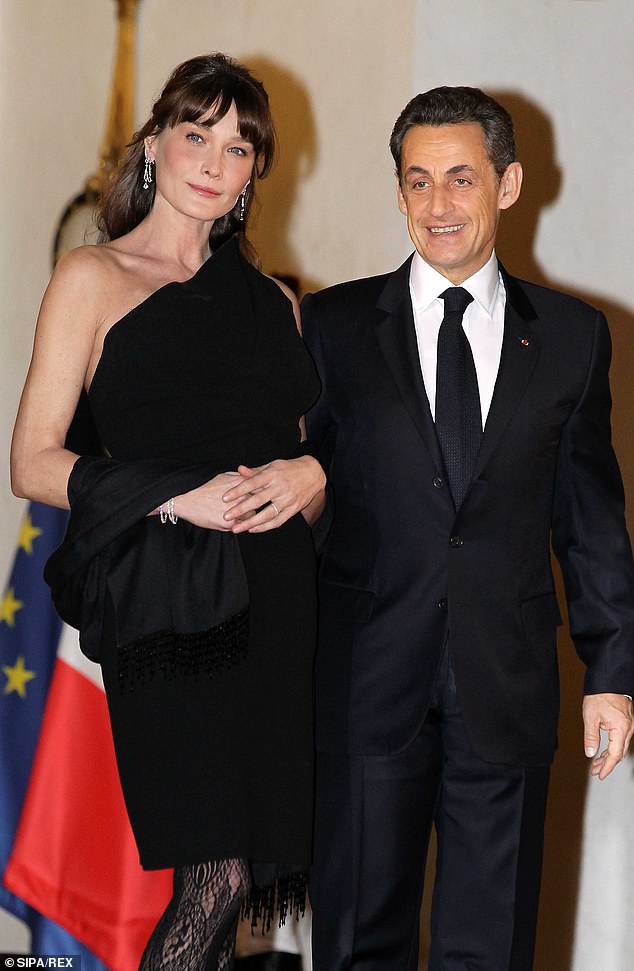 Carla Bruni went on to marry Nicolas Sarkozy in 2008, a year after they met, and a year into his tenure as President of France (pictured in 2011)

On top of the bitter family row, the book is also dividing critics, with some calling it ‘brilliant’ and others judging it rather ‘annoying.’

Bruni, who went on to marry Nicolas Sarkozy in 2008, briefly dated Raphaël’s father Jean-Paul before they started their liaison.

The model and singer dated Raphaël for seven years and wrote a song in his honour entitled ‘Raphaël’ in which she said he ‘looked like an angel,’ but was a ‘love devil.’

She went on to marry Nicolas Sarkozy shortly after he became France’s president in 2008, and the couple are still together today.

Much has been said of Bruni’s colourful dating history.

She is said to have had an on/off affair with Mick Jagger when she was in her 20s, which, according to his wife Jerry Hall, precipitated their divorce.

It was rumoured she briefly had an affair with Donald Trump however, the model said the US president had made up these claims.

END_OF_DOCUMENT_TOKEN_TO_BE_REPLACED

END_OF_DOCUMENT_TOKEN_TO_BE_REPLACED
Recent Posts
We and our partners use cookies on this site to improve our service, perform analytics, personalize advertising, measure advertising performance, and remember website preferences.Ok