Fury and frustration spilled onto Melbourne’s streets for a second day on Tuesday, as 2000 protesters engaged in a day-long and at-times-violent march through the city – scenes organisers vowed to replicate again on Wednesday.

Channel 7 reporter Paul Dowsley was physically attacked twice by protesters, including having a can of drink thrown at the back of his head while he was presenting live on camera.

The marchers were condemned by unions representing nurses, paramedics, firefighters and building workers. Tim Martin, who was among the motorists trapped by protesters on the West Gate Freeway, told Nine News the crowd “looked dangerous”.

“It was really quite frightening. Some parents had their kids there. The language that was being used was atrocious, [protesters were] urinating on the side of the freeway.”

In a hastily called late evening press conference, police Chief Commissioner Shane Patton said police would be “out in force again” on Wednesday.

“I’m not going to disclose what our tactics will be tomorrow, but they will be different,” he said, labelling the protesters “cowards” and confirming 62 people had been arrested and three police injured on Tuesday.

“Please, I implore you, do not do this, do not come into the city. It achieves nothing … It’s clear that this was not a protest. This was at times, an affray. At times, a violent disorder, coming together … we should not see this occurring in Melbourne.”

Premier Daniel Andrews, who did not front a press conference, released a statement in the evening condemning the “terrible behaviour”.

“Acts of violence and disruption won’t result in one less case of [COVID-19] – in fact it only helps the virus to spread,” he said.

CFMEU Victorian secretary John Setka, the target of Monday’s demonstration, distanced his union from the crowd, saying they were “drunken morons”. Many appear to be construction workers, but a number of other groups’ flags were seen. The protesters have vowed to stage actions daily until worksites reopen.

Tuesday’s march began at the construction union’s Elizabeth Street headquarters at 10am before police dressed in full riot gear and brandishing crowd-control weapons moved them on. Lighting flares, the protesters then snaked past state Parliament and Flinders Street Station before they evaded police lines and ascended the West Gate Bridge by mid-afternoon. Traffic from the city was brought to a standstill as men hitched rides on the back of utes.

The march followed a violent confrontation at the union headquarters on Monday, hours before the state government announced it was closing construction sites statewide.

The proposed shutdown had been debated between Andrews government ministers and Chief Health Officer Brett Sutton for several days before the decision was taken. Fundamental disagreements remain between the industry and government and there is no certainty that the industry will reopen in two weeks as planned. 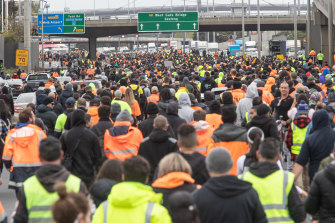 Professor Sutton and the government’s senior cabinet agreed on a series of tighter regulations as a last resort, including a vaccine mandate and a ban on tea rooms.

The Chief Health Officer admitted a shutdown of the industry had been a “live question” before the decision on Monday and said after almost two weeks of warnings, it would give the industry the shock it needed to stick to the rules.

“In the same way that you don’t wear a hard hat on your elbow – you wear it on your head – masks on chins does not do the job in construction and transmission was occurring,” Professor Sutton said.

The government announced that 337 of the state’s 6000 active cases were linked to construction sites.

Mr Pallas said on Tuesday he was confident that both the large majority of construction workers wanted to get vaccinated and that two weeks would be enough time for the sector to recalibrate, led by the vaccine mandate and ongoing random compliance checks.

“A fear of apprehension drives behaviour in most cases,” he said, admitting the closure would cost the state’s economy over $1 billion a week.

Master Builders Victoria chief executive Rebecca Casson said she understood health officials needed to act quickly, but “what we’ve seen over the last few days is potentially a result of the intricacies of the industry not being understood by some people”.

Business Council of Australia chief Jennifer Westacott accused the Andrews government of putting Victoria’s economic recovery at risk through its snap shutdown. Praising the NSW government’s decision on Tuesday to reopen the construction industry at full capacity, Ms Westacott said the Berejiklian government had taken a “sensible, risk-based approach to unwinding restrictions and letting people get on with their lives”.

“NSW has demonstrated that a best-practice model … throughout this outbreak, NSW has worked closely with industry to problem solve and develop solutions in partnership,” she said.

CFMEU national construction secretary Dave Noonan insisted the Melbourne protests were an attempt to “co-opt” the union and that most of the attendees are “far-right and neo-Nazi groups”.

Mr Noonan dismissed reports that “at least half” of the protesters opposing mandatory vaccination and the shutdown of Victoria’s construction sector were genuine construction workers, instead claiming they were “anti-vaccination extremists”. 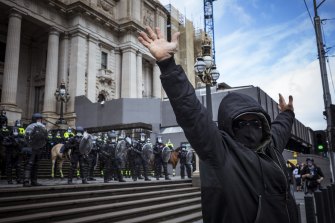 Protesters at the state parliament in Spring Street.Credit:Chris Hopkins

In a strongly worded statement on Tuesday, Victorian nurses demanded the Melbourne protesters “stop fighting for the right to overwhelm our health system”.

The Victorian branch secretary of the Australian Nursing and Midwifery Federation, Lisa Fitzpatrick, called on the protesters to “stop thinking only of themselves, stop the violence and put the health and welfare of the Victorian community first”.

Firefighters’ union chief Peter Marshall said that professional firefighters had continued to respond to emergencies throughout the pandemic and “it’s an insult to their work, and to the efforts of every frontline worker, to see these protesters so selfishly ignore the rules”.

However, Victorian Opposition Leader Matthew Guy called for the “heavy-handed” construction industry shutdown to be reversed and rapid antigen testing to be implemented.

Federal Industrial Relations Minister Michaelia Cash also seized on the violent protests to attack the Labor Party, calling on them to stop taking donations from the CFMEU, even though they were the targets of violence, not the instigators. “Today’s violence from a number of their members shows that [Labor leader] Anthony Albanese needs to cut off the CFMEU once and for all,” said Senator Cash, who is also the Attorney-General.

Professor Sutton said construction workers regularly travelled over 20 kilometres to get to work, potentially spreading the virus long distances. That was demonstrated by 49 regional Victorian residents contracting COVID-19 at a worksite in Melbourne, he said.

Health department deputy secretary Kate Matson told The Age a single case in a construction worker in Hobsons Bay, in Melbourne’s west, had quickly resulted in infections in seven other workers including in the regions. 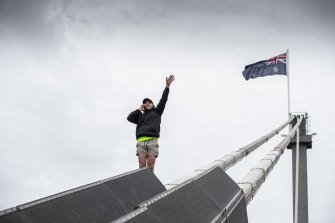 A protester on the West Gate bridge.Credit:Jason South

She said on the first day of the case being infectious, before the individual developed symptoms, they passed the infection to four other people on a Melbourne worksite. Three days later, some of those tradespeople worked on a site in the Geelong area, sparking another three further infections.

“These all happened in the last week, so there’s a possibility for more,” Ms Matson said.

With Cassandra Morgan and David Estcourt