Rishi Sunak, chancellor of the exchequer, said finance ministers from the Group of Seven leading industrialized nations signed the pact on the second and final day of meetings in London.

“I’m delighted to announce that G-7 finance ministers today, after years of discussions, have reached a historic agreement to reform the global tax system to make it fit for the global digital age and crucially to make sure that it’s fair, so that the right companies pay the right tax in the right places,” Sunak said in a video message posted on Twitter.

The G-7 ministers agreed in principle to a global minimum tax rate of 15% for multinational companies in each country they operate in. 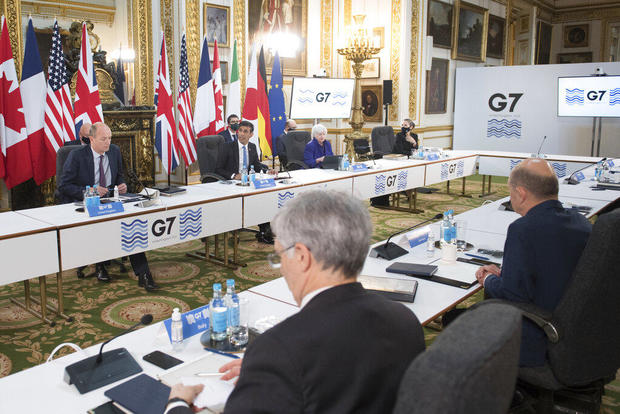 U.S. Treasury Secretary Janet Yellen, who attended the London meetings, said in a statement that the agreement “provides tremendous momentum” towards reaching a global 15% rate that “would end the race-to-the-bottom in corporate taxation, and ensure fairness for the middle class and working people in the U.S. and around the world.”

“The global minimum tax would also help the global economy thrive, by leveling the playing field for businesses and encouraging countries to compete on positive bases, such as educating and training our work forces and investing in research and development and infrastructure,” Yellen said.

The meeting of finance ministers came ahead of an annual summit of G-7 leaders scheduled for June 11-13 in Carbis Bay, Cornwall. The U.K. is hosting both sets of meetings because it holds the group’s rotating presidency.

The G-7 has also been facing pressure to provide vaccines for low-income countries facing new surges of COVID-19 infections and to finance projects to combat climate change.

International discussions on the tax issue gained momentum after U.S. President Joe Biden backed the idea of a global minimum 15% corporate profit tax rate. The proposal also found support among other major economies such as France and Germany.

According to the first iteration of the American Jobs Plan, the large infrastructure measure proposed by Mr. Biden, the levy would be a 15% tax on the wealthiest companies’ book income, that is, the high profits they disclose to their shareholders in their annual reports, as opposed to what is normally their taxable income, a figure that can often be as low as zero because of what the Biden administration deems “significant gaps in the current tax law.” This tax could be applied to the approximately 200 companies with at least $2 billion in profits each year.

Nations have been grappling with the question of how to deter companies from legally avoiding tax by resorting to tax havens — typically small countries that entice companies with low or zero taxes, even though the firms do little actual business there. They’ve also been trying to solve the related problem of taxing internet-based companies doing business in countries where they have no physical presence and thus pay little or no tax.

According to an analysis by the Institute on Taxation and Economic Policy, a left-leaning nonprofit tax policy organization, at least 55 of the largest corporations paid no federal corporate income in the most recent fiscal year.

The endorsement from the G-7 could help build momentum for a deal in wider talks among more than 140 countries being held in Paris as well as a Group of 20 finance ministers meeting in Venice in July.