Victorian government minister Gabrielle Williams who was the subject of an angry tirade by her former cabinet colleague Adem Somyurek says he must “recognise [his] role in perpetuating sexism and misogyny”.

In her first interview since Mr Somyurek was sacked from the Andrews government frontbench last year, Ms Williams spoke of the “insidious and entrenched force” of sexist behaviour and revealed Mr Somyurek, despite issuing public apologies, had not personally reached out to her. 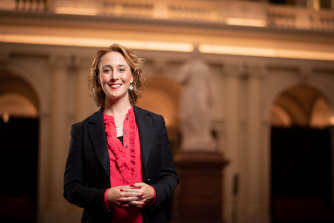 Gabrielle Williams has revealed Adem Somyurek, despite issuing public apologies, had not personally apologised to her. Credit:Eddie Jim

“The thing about a public apology in the absence of a personal apology is that it’s fundamental purpose is to salvage the individual’s reputation and has nothing to do with the victim,” Ms Williams told The Age.

“Adem sought to explain his aggression by way of some alleged factional war. The reason I found that particularly disturbing is I never had a personal factional altercation with Adem, in fact I had talked to the man less than half a dozen times in less than six years.

“For me the mismatch was between the level of hatred, the level of venom [from someone] you’ve had virtually nothing to do with and no personal interaction with.”

Mr Somyurek told The Age: “I was advised by people close to Ms Williams that it was not a good idea to reach out to her directly. Our paths have not crossed since these events happened. I have publicly and repeatedly apologised and am more than happy to do so in person.“

The Age has been unable to independently verify who Mr Somyurek spoke to. Several people close to Ms Williams said they had neither spoken to Mr Somyurek nor advised him not to speak to the Minister for Women.

Premier Daniel Andrews sacked Mr Somyurek from his cabinet hours after The Age and 60 Minutes exposed alleged widespread branch stacking in Victoria and his derogatory comments towards Ms Williams, the Minister for Women and the Prevention of Family Violence, and members of the LGBTQI community.

In secret recordings, Mr Somyurek said of Ms Williams that he would “f—ing force her out of the ministry”.

He issued a public apology following the investigation, and during the last sitting week in Parliament last year, Mr Somyurek said he would not be defined by the language he used and that the “foolish and offensive” comments had gone against his principles and philosophy.

“In the last round of state preselections I used my influence in the party to preselect six women into Parliament,” Mr Somyurek said. 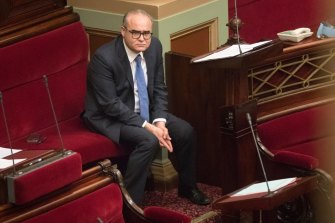 On the last Parliamentary sitting day of 2020, Adem Somyurek made a speech in Parliament and said his “foolish and offensive” comments were against his principles and philosophy. Credit:Jason South

“This record has not been and may never be matched by any faction leader … Furthermore, I also insisted on and supported the first woman state secretary of the Victorian branch of the Labor Party for 40 years.

“While some people pay lip service to women in politics, I am proud to say that I have actually delivered, and no-one can take that away from me. I therefore take this opportunity to again unequivocally apologise for my use of appalling language. I hope I have demonstrated that my use of language is diametrically opposed to my values.”

Ms Williams said the attitude Mr Somyurek expressed of her in the leaked audio underpinned his approach to viewing women as “chess pieces” who can be parachuted in and out of Parliament at his wish.

She said those comments undermined and ignored the talent and work ethic of successful female MPs, who Mr Somyurek claimed were preselected as a result of his influence in the Labor Party.

“Whether it’s Adem or anyone else in a similar circumstance, I don’t think we should accept his remarks at face value … that’s the thing about sexism and misogyny – it’s insidious and it’s an entrenched force that tricks people into thinking it’s rational,” Ms Williams said.

“Anyone who’s been called out for that language needs the courage to recognise their role in perpetuating sexism and misogyny and what sits behind it.

“If you contrast the statement he made about me, and they were very gendered in nature, with some of the paternalistic comments about his role in preselecting women, I don’t think the two are inconsistent. The attitude towards one is very much underpinned by the attitudes that are revealed in the other – putting women into Parliament as though they are chess pieces.”

The former factional warlord quit his membership of the party before the national executive met to kick him out of the ALP, but national party president Wayne Swan at the time said “there will never be a place for Mr Somyurek in the ALP ever again”.

Ms Williams said she was “gutted” by Mr Somyurek’s comments, and although she didn’t enjoy the process of having his comments aired in the media, she said it led to important discussions within the Labor Party and the broader community about the damage caused by sexism and misogny.

“I’m not the first woman to experience that kind of behaviour and I won’t be the last, and that's the real shame,” Ms Williams said.

“Women in workplace settings experience this stuff day in, day out. Mine happened to take place on a national stage in the media. This is not new, and it continues to happen, and I think that goes to the much broader issue of our need to analyse what sits behind it.”