Home » Government has ‘nothing to be embarrassed about’ over disintegrating records: Stoker

Government has ‘nothing to be embarrassed about’ over disintegrating records: Stoker

The minister in charge of the National Archives says the institution has to deal with the slow disintegration of its records even as it warns parts of Australia’s history cannot be saved.

Assistant Minister to the Attorney-General Amanda Stoker also says it’s a good thing the Archives is going to the public for donations to save disintegrating records and that the government has “nothing to be embarrassed about” in its treatment of the institution. 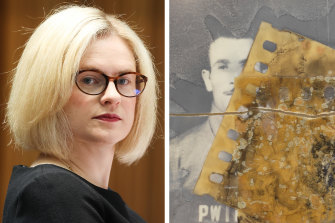 Senator Amanda Stoker says it’s a good thing the Archives is going to the public for donations to save disintegrating records, like this photo of an Italian prisoner of war in Australia.Credit:Alex Ellinghausen/National Archives

The Tune review of the National Archives, delivered to the government last year but only released in March, recommended a $67.7 million seven-year project to urgently digitise the records most at risk. Despite that recommendation, there was no extra money in this month’s budget for the Archives to carry out the required work.

Senator Stoker said the project wasn’t “something that can be done with the snap of a finger” because the Tune review suggested a complete overhaul of how the entire government managed records.

National Archives director-general David Fricker told an estimates hearing the institution was already having to make compromises and decisions about what it could save and what would have to be lost. But Senator Stoker said this was “business as usual”.

“Let’s not pretend this is a matter that has cropped up as an isolated incident, it is part of the usual process of the work of the Archives,” she told the hearing late on Thursday night.

“Time marches on and all sources degrade over time.”

Since its plight has been highlighted by The Age and The Sydney Morning Herald, the Archives has taken in more than $30,000 in public donations and increased its memberships tenfold, to 500 people.

Senator Stoker said it was a good thing the Archives was taking donations because it was a sign the organisation was proactively implementing a Tune review recommendation that it explore new philanthropic opportunities.

“It’s about buy-in from the public. It’s about public engagement,” she said.

Labor senator Kim Carr, who is on the Archives’ advisory council, asked whether that was letting the government off the hook for funding.

“Every other cultural institution in the Commonwealth received support, but not the Archives,” he said.

Senator Stoker said the Tune review put the Archives in a different position to the eight other national institutions, which collectively received $85.4 million in the budget.

“It asks us to turn our minds to what represents an enormous transformation of the way we do archives in this country,” she said.

“That necessitates a different approach to simply putting a few more dollars in the tin, which is what has occurred for other agencies.”

She said the Archives had reached “a really important moment” where the government had to decide whether to fund keeping records in the old way or a new way.

“And when that is done, I think we will all be pleased that we put the money into the new system, rather than continuing to put money into the old system,” she said.

However, she wouldn’t say when the government would respond to the Tune review, and as to whether that response would include any money, she said, “I’m going to keep you in suspense”.

Mr Fricker said the 115,000 hours of magnetic tape within the Archives’ collection was most at risk of being lost forever because of the time it took to digitise.

“It’s unlikely we’ll be able to preserve it all. So we have to lose some of it,” he said.

The Age and the Sydney Morning Herald revealed on Thursday the office of Prince Charles has been made aware of the situation facing the National Archives and in particular, the plight of the Pitcairn Island register, which holds details of the births, deaths and marriages of descendants of the Bounty mutiny in 1789.

The register is disintegrating, along with many other unique archives including wartime speeches of John Curtin and personnel files of RAAF non-commissioned officers from World War II.

Labor’s Raff Ciccone asked the assistant minister whether it was embarrassing for the government to be attracting this kind of international attention.

“This is now starting to become a bit of a joke where you’ve got people from overseas criticising the Commonwealth government, that we can’t even find … $9.67 million every year,” he said.

Senator Stoker replied: “I don’t think we have anything to be embarrassed about”.