The Australian Academy of Cinema and Television Arts is giving the comic-drama Rams an extraordinary second chance at its awards after director Jeremy Sims said that it was "grossly under-represented" in the nominations in a COVID-disrupted year.

The Academy is retaining the sole Rams nomination at the country's main film and television awards later this month – Sam Neill for best actor – and allowed it to be eligible for other categories next year. 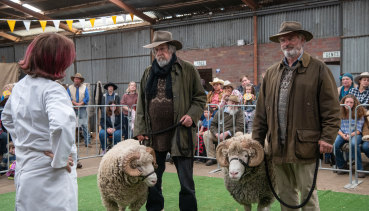 The Academy's chief executive, Damian Trewhella, said "reduced cinema capacities, total cinema closures in Victoria and Roadshow's decision not to make Rams available ahead of its theatrical release on AACTA TV – our member streaming platform" meant Rams was not in contention this year outside Neill's nomination.

"We will ensure Rams is considered for our awards by all members and chapters next year," he said.

A day of behind-the-scenes drama followed Sims telling The Sydney Morning Herald that he was "sad and disappointed" that Rams had just a single nomination after hardly any Academy members had the chance to see it before voting.

Distributor Roadshow did not allow Rams to screen on AACTA TV before its cinema release, believing it was not sufficiently secure to protect it from being pirated, although the Academy insisted it had the appropriate security.

Rather than allowing the film to go online, Roadshow organised cinema screenings for members, which are thought to have been sparsely attended.

At a meeting with the filmmaking and distribution team on Wednesday, after the Herald sought comment from the Academy, it decided to give the film another opportunity for awards next year.

While delighted the film opened on top of the box office last weekend – taking $1.25 million including previews – Sims had said he felt for the cast and crew who missed consideration.

"Basically none of the AACTA members got to see the film," he said. "It's a shame and it's disappointing for all the people that worked so hard on the film to not have an equal chance of having their work recognised."

Given the warm reviews, the reimagining of an Icelandic drama about two sheep-farming brothers should have been a genuine contender for best film, director and multiple craft awards.

While also thrilled by the box office, Roadshow managing director Joel Pearlman had earlier said he was "incredibly disappointed" that Rams did not get more nominations. He felt that protecting the viability of the cinema release was critical.

"I respect AACTA and what they're trying to do but this is where COVID has been challenging," he said. "If this film had been released in April, we would not have hesitated in putting it up on its platform."

Sims was trying to be philosophical – "it's a COVID thing that we slipped through the gaps because we moved our release dates later and later" – but believed Roadshow was right to protect the film.

"We'll be the number one film by a mile in Australian box office and we won't be represented at the AACTAs," he said.

The drama left him appreciative his cast and crew will have another chance but bemused.

"The ram judging awards in the film seem to be run on far more rigorous lines than the AACTA Awards these days," Sims said.

END_OF_DOCUMENT_TOKEN_TO_BE_REPLACED

END_OF_DOCUMENT_TOKEN_TO_BE_REPLACED
Recent Posts
We and our partners use cookies on this site to improve our service, perform analytics, personalize advertising, measure advertising performance, and remember website preferences.Ok